Clooney Speaks Out About Journalism and Filmmaking As NYFF Opens

The 43rd New York Film Festival will open tonight with a gala Lincoln Center screening of George Clooney’s “Good Night, and Good Luck,” followed by the traditional glittering after-party at Tavern on the Green in Central Park. Clooney’s new movie is a look at a seminal time in the early days of broadcast journalism when reporter Edward R. Murrow took on Senator Joseph McCarthy of Wisconsin for his role in communist witch-hunts during the red scare of the 1950s. “I thought it was a good time to raise the idea of using fear to stifle political debate,” explained director & co-writer Clooney after a screening of the film Wednesday.

“The real teeth of journalism has been missing [recently] but there is still some [good] journalism out there,” he told a packed Walter Reade Theater Wednesday filled mostly with journalists.

The film, which won multiple awards this month at the Venice Film Festival, traces the true story originating with the U.S. Navy’s dismissal in 1953 of pilot Milo Radulovich who was forced out of his position for being a perceived security risk because he refused to denounce his father and sister who were suspected of communist sympathies. All charges against him were kept sealed, inhibiting his defense, and CBS newsman Murrow exposed the story on his news documentary show, “See it Now” despite concerns from network execs who feared a government and sponsor backlash. 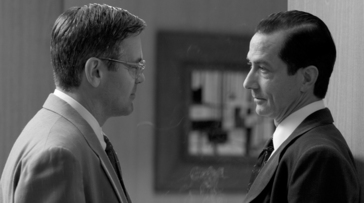 George Clooney and David Strathairn in a scene from “Good Night, and Good Luck”. Photo provided by the Film Society of Lincoln Center.

“Good Night, and Good Luck,” starring David Strathairn as Murrow and Clooney as the news producer Fred Friendly, is entirely in black and white allowing the use of actual footage of McCarthy’s speeches to be woven into the film naturally. “We knew we would use McCarthy in his own words because that’s what Murrow did [in his reporting],” said Clooney at the press conference, joined by co-writer and producer Grant Heslov, Strathairn and Patricia Clarkson, who also stars in the film. “We restored [the] McCarthy footage, and it’s in black and white, so we [made the decision] that the rest of the film should be that way.”

Clooney added during the session that the aesthetics of the film were very important to him, referencing previous movies as examples of how he wanted “Good Night, and Good Luck” to feel. “At first I wanted the film to look like an [old] Godard film, but then we looked toward Pennebaker docs like ‘Crisis’ for inspiration,” he explained.

During the press conference, the outspoken actor and filmmaker also offered his opinions of journalism and said his own father, a journalist, had influenced his approach with this film. “[It is] the duty of journalists to question authority — whoever that might be — even if they’re accused of being unpatriotic,” Clooney quoted his father as saying.

Clarkson later weighed in with her opinion, saying that it was important to her that she make movies that “reflect my ideals, thoughts and wishes.” Continuing, she offered a moment of lightheartedness, joking that she wasn’t getting rich by making movies like “Good Night, and Good Luck.” “I’m broke because of this movie,” Clarkson laughed, prompting Clooney to hand her two twenty- dollar bills, which Clarkson promptly stuffed in her shirt. “I think I’ll keep it,” she said laughing.