The 2006 Festival de Cannes came to a close tonight in France with Ken Loach winning the festival’s top prize, the Palme d’Or, for his feature film “The Wind That Shakes the Barley. “[This] film is a little step in the British confronting their imperialist history,” Loach said tonight, accepting his prize on stage at the Lumiere Theater in Cannes. “And if we tell the truth about the past, maybe we can tell the truth about the present.” The jurors awarded two prizes to Pedro Almodovar‘s “Volver“, the screenwriting award to Almodovar and notably presented the best actress prize to the entire cast of women in the movie. And gave the best actor award to the complete cast of Rachid Bouchareb‘s “Indigenes.”

Loach’s “The Wind That Shakes The Barley” recalls Ireland’s fight for independence through the story of two brothers in 1920 who join others to form a volunteer army to fight the “Black and Tan” squads who are brought over from Britain to block Ireland’s quest for independence. Both brothers are driven by their personal feeling of duty and passion for their country and embark on a dangerous mission to bring the British to a breaking point, resulting in both sides agreeing to a truce to end the standoff. Nevertheless, civil war erupts and families who fought together earlier, are now sudden enemies.

“I feel stunned, to be honest,” Loach told journalists after the ceremony, noting that his 13th trip to Cannes turned out to be the lucky one. Reflecting on the fact that the awards tonight honor films that are about political issues, Loach said, “We live in extraordinary times that have made people political in a way that maybe they weren’t four, five or six years ago,” and praising Cannes organizers he said, “They have put the festival and cinema back at the center of our lives.” 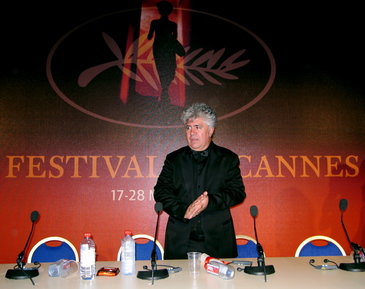 Pedro Almodovar tonight in Cannes, after his film was awarded two prizes at the 2006 Festival de Cannes. Photo by Eugene Hernandez/indieWIRE

Pedro Almodovar, his second time in competition here in Cannes, again won an award. Accepting his screenwriting award on stage, he said, “My movie is about family among other things, a family of women.” And earlier in the ceremony, the complete cast of women from the movie including Penelope Cruz, Yohana Cobo, Lola Duenas, Carmen Maura, and Blanca Portillo accepted the award. Honoring her director, Penelope Cruz said, “I think this award really belongs to Pedro, to the master.”

Acknowledging that he was quite aware that many considered him a frontrunner for the Palme d’Or this year, just as he was a few years back when he won the directing prize for “All About My Mother,” Pedro Almodovar said after the ceremony, “To be the favorite until the end, I would like to tell you it is a curse — a maldicion.” But he added, “It doesn’t mean I am complaining. The script is the base of the movie.”

Asked whether he was dispappointed to fall just short of the Palme d’Or this year with his Grand Prix, runner-up award, director Bruno Dumont said, “I make films that try to take risks and try to surprise the (audience) — I am trying to get through to an individual, Wong Kar Wai or somebody in a cinema anywhere. Each indivoudal is as important as the president of a jury.”

The complete list the 2006 Festival de Cannes are being announced tonight in France.

Palme d’Or: “The Wind That Shakes The Barley” by Ken Loach

Third Prize (shared): “Mother” by Sian Heder and “A Virus” by Agnes Kocsis