CANNES L'ATELIER '06 INTERVIEW: Dev Benegal: "I spent a year traveling with a touring cinema, which

Every day through the end of the 2006 Festival de Cannes, including weekends, indieWIRE will be publishing interviews with filmmakers participating in the L’Atelier du Festival, which according to Cannes, “was created in 2005 to reveal a new generation of filmmakers through the world, whose works, still at the project stage, might one day be honoured by being selected for the Cannes Film Festival.” Eighteen filmmakers were given the opportunity to participate in an e-mail interview, and each was sent the same questions.

Director Dev Benegal, who was born in New Dehli, India, is at the L’Atelier with his feature film project, “Road, Movie.” L’Atelier describes “Road, Movie” as about “Vishnu, a restless young man, (who) comes up with a plan to save his father’s faltering hair-oil business (and how) his personal journey becomes an odyssey across the mythical Indian landscape.”

Please tell us about yourself and your background, including where you were born and grew up, as well as how you became a filmmaker.

I was born in the cinema halls of New Delhi. They were not cinema’s they were halls; huge cavernous spaces, womb like where you could surrender yourself to an enormous screen. I saw movies, lots of them, almost all of them Hollywood and British imports. I wasn’t even aware there a cinema that existed outside of this. It’s only later that I learnt about European art house cinema and slowly began to undestand and appreciate it. Ironically, my father who is a walking encyclopedia of Hollywood musicals of the 20’s and 30’s did not allow me to see any Bollywood films! They were banned.

(My father) was a theater director, I had an uncle who was an eccentric inventor who made esoteric high end audio gear, another one who played the violin for the Delhi Symphony Orchestra, an uncle who was a legendary painter and so on… so the atmosphere all around was just perfect. By the age of 13 I was determined I wanted to work in films. The one film that did it for me was Orson Welles‘ “Citizen Kane.” I had heard so much about it from my father I was sure when I saw the film it would be disappointing. And when I did, I remember being blown away by it. It felt like it had been made a few days ago. I remember asking the usher if I could stay back and watch the next show. Eventually I ended up seeing it all day long, over and over again. And when I stepped finally into the night sky I knew “that” was what I wanted to do. Kubrick’s “2001” is another one of those. A film I’ve seen 76 times!

In school there were the usual activites which kept me away from academics. I got involved in theatre, photography, painting and music while also being the school magazines official cartoonist and photographer. I would (also) miss classes and head straight for the American Library which had the entire collection of the Amercian Cinematographer magazine. I devoured them and slowly began to piece together the puzzle of filmmaking.

I left school and headed straight to Bombay to apprentice with a leading independent filmmaker who was a cousin of my fathers. After working on three of his features and his definitive documentary on Satyajit Ray, I made a few shorts which got selected for several festivals, won awards on the strength of which I got a grant to spend two years studying at NYU.

After NYU I returned to India. I wanted to make a film but it had to be as Pete Townsend of ‘The Who’ had said, about “My Generation.” One afternoon when I was bored and trying to while away some time I came across a book which turned my life around. It was titled “English, August.” 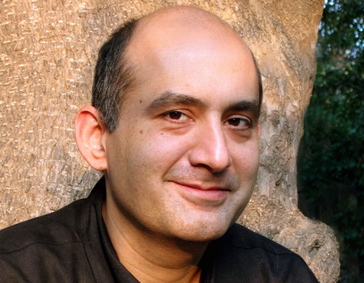 Please tell us about your previous work, including information about your recent films and other creative projects.

My first film “English, August” (based on a cult novel) was a story of a young graduate sent to a small town somewhere in India to train to become a civil servant. The film charts his year in a room with blue walls where he listens to jazz and rock and masturbates. The only one friend he makes in this strange and surreal world of bureaucrats is a frog. The film, which was in English and four other Indian languages, was a co-production with L Sept Arte and the CNC. It was rejected by all Indian distributors untill it became the first Indian acquisition by the Hollywood major 20th Century Fox. It became a huge success at the box office discovering a new audience previously ignored by Bollywood. It ignited the next generation of Indian cinema and is now acknowledged as a landmark in contemporary Indian cinema.

My next film which was a co-production with BMG and Adlabs, a leading Bollywood producer, was an official selection at Venice and was about the water wars in Bombay. 20th Century Fox distributed this film again nationwide to huge success.

I adapted a best selling Indian novel “Ravan & Eddie;” a fable about a boy with ten heads. The screenplay was roundly rejected by everyone in India even though it had won the Grand Prix at the Tokyo Developers Forum at the Tokyo International Film Festival. Once again I was back to where I began. This time only worse. I put the script on a shelf titled “Deep Freeze” and at one point thought of giving up making films. In this moment of deep despair I wrote “Road, Movie.”

And then an angel from France called.

My life took a turn when “Ravan & Eddie” was selected for the prestigious eQuinoxe scriptwriting workshops in France. At eQuinoxe my advisors Paul Haggis, Mary Sweeney, Susan Landau, Martin Sherman and Coleman Hough made me realise the script I had was exceptional and put me back on track.

In the fall of 2005 my life took another turn when I accidently bumped into the English actor and writer Stephen Fry to discover that for over 20 years we had both shared a similar passion; to tell the story of the life of the genius Indian mathematician S. Ramanujan and his friendship with the Cambridge math don G.H. Hardy.

Stephen and I hit it off instantly (and no it wasn’t just a passion for Apple Macs!) and are now co-writing and co-directing a film about this amazing friendship and the passion of one man to do the one thing he believes in. Ramanujan’s obsessive passion was what inspired me as a student in India to make independent films and do what I wanted to when Bollywood seemed to be the only way.

Please tell us about your new project. What is it about and what inspired to pursue this new project?

“Road, Movie,” my project at Atelier du Cannes, is my most personal film. It began as a simple story of a man driving a truck with a cargo of old film projectors across the mythic landscape of India and became a personal journey of discovery for me. A journey through cinema and through contemporary India.

I spent a year traveling with a touring cinema, which took me to a world where past and present and future freely coexist. A world where screens are raised and lowered every night, where audiences of over 400,000 gather to watch films. Where people surrender themselves to the image as they surrender themselves to god. I was reminded of the days I watched films in the cinema halls. Except here it was in the open.

“Road, Movie” grew from this journey. A carnivalesque world where man, nature, animals and film all came together for that fleeting moment underneath the star lit sky. In this age of cinema changing from a collective experience to a personal one this story took on a greater significance. It became a modern tale of of survival and hope in a world of fear, prejudice and authority.

What do you hope to accomplish for the project while you are in Cannes? What are your specific needs to continue developing your new project?

I’m hoping to meet people who would share a similar passion in the story I’m telling. People who could participate in the financing of this project, in pre-sales and distribution. With my crew in place I’m now searching for a cast to play the young leads and have narrowed in on veteran international star Om Puri who plays a key role in the film.

The film is being produced by Hollywood producer Susan B. Landau, Thompson Street Entertainment of Los Angeles and August Entertainment, a cutting edge Asian film production company. Filming in Rajasthan and Kutch begins early 2007. A book of photographs which I have taken documenting the amazing life of a touring cinema is also in the works.

What are some of your favorite movies and influences, including other films and filmmakers, as well as other creative influences? Which films are you most interested in seeing at this years Festival?

I have a pretty eclectic and non discriminating taste in cinema. I learnt filmmaking by watching all the really cheap Hollywood imports. It was more a case of what not to do than what to do. Photography and Music are passions of mine as are Macintosh Computers. I love genre. I think it’s the one language that the entire world can share; whether one is in Tokyo, Taipei or Trivandrum. I’m a film junky and hoping to catch most of the films. In India I attended a festival where I saw 180 films in 12 days! So there you go! Finally I hope to meet Wong Kar Wai!

[Get the latest from the Festival de Cannes throughout the day in indieWIRE’s special Cannes ’06 section.]

This Article is related to: Festivals and tagged Interviews