indieWIRE INTERVIEW: Dito Montiel, director of "A Guide to Recognizing Your Saints"

Dito Montiel directed “A Guide to Recognizing Your Saints,” which screened in the Independent Film Competition: Dramatic section at the 2006 Sundance Film Festival. The film, starring Robert Downey Jr., Shia LaBeouf, Chazz Palminteri, Dianne Wiest and Rosario Dawson, is based upon his memoir of the same name, about a boy growing up in a tough New York neighborhood and the people he left behind after moving to Los Angeles. After a return home, he finds friends on a downward spiral or even dead, and begins to believe he has been saved from their fate by figures he recognizes as his “saints.” Montiel participated in both the Sundance Screenwriters Lab and Directors Lab, and won the directors award and speical jury prize for best ensemble performance (dramatic) at this year’s Sundance. The film also took the Critics’ Week Award at the recent Venice Film Festival. Montiel answered questions given by indieWIRE ahead of the film’s premiere at Sundance, and responses are excerpted from the interview here. First Look Pictures will open the film in limite release this Friday, September 29. 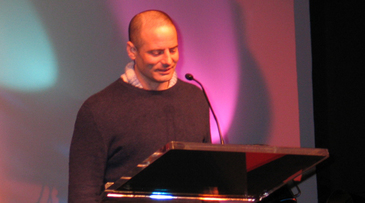 Please tell us about yourself. Where were you born? What jobs have you had?

I was born in Queens, New York. I’ve done every job you could think of in New York. Selling peanuts to Larry Fresh Fruit ices to dog walker to unloading trucks at the Jacob Javits Center.

What were the circumstances that led you to become a filmmaker?

Ridiculous circumstances. I always wrote songs. [I was] much more of a songwriter. I was in hardcore bands when I was little and always played music. I wrote a book. It came out. Robert Downey and my friend Jonathan Elias talked about making it a movie. They brought down producer Trudie Styler [and] I said OK. [I] found out INT meant interior, EXT meant exterior and wrote a script. Someone I never met submitted it to the Sundance Sundance which picked it and brought me to the labs where I learned from some great teachers, and then we made a movie. I am and always will be a fan.

Did you have any formal filmmaker training?

When I was a kid I was into hardcore music. The scene in New York was tiny. Every person hanging out was in a band and played at the A7 Club. There was not much rehearsing or anything. Just doing. You got on stage in front of the rest of us and made noise until it sounded really good or even worse. Luckily, I never lost that mentality. I have no schooling in any normal sense but have learned from the best as far as just doing things. I learned filmmaking from loving movies and then just saying, OK, let’s do it. At the moment it seems to be working so I’ll stick with it.

How did you finance “A Guide to Recognizing Your Saints?

As for financing, I had the mentality that money was no object. NOT because I had any but because that was NOT going to dictate whether or not it was made or HOW it was made. This, or any other film I make, or you do, will, in the end simply be varying degrees of what you’re capable of. I suggest EVERYONE go on the cheaper side. It makes it more fun and inevitably will make your art form come out better. I could NOT stress anything more.

How did the initial idea for the film come about?

I wrote a book, but based the film really around one moment in the book. To try and cover the book would have been a biographical picture about someone no one should really care about.

I LOVE movies and always, ALWAYS have. ALWAYS! [I’m] not much a fan of indie films unless I’m dragged in, and then I usually love them (sometimes). [I’m] much more about Morgan Freeman, a white girl and a serial killer. My favorite filmmaker is Spike Lee. I love his stuff. Even if I don’t like the film I love the craft. I think he is the best.

What were some of the biggest challenges you faced in either developing the project or making the movie?

I had exact visions in my head of who and what my characters looked and thought like. As some of them do not exist in front of cameras, finally giving in and letting the actors do what they wanted with the roles was scary. Once you get the guts to do that though, life is a lot easier and more fun.

What is your definition of “independent film”?

Usually boring. Once in a while INCREDIBLE!

What are some of your favorite films?

“25th Hour” is one of my favorite films of all time. “Carlito’s Way” (NOT the remake), “Unfaithful,” any documentary by Jon Alpert (“One Year in a Life of Crime“). In 2005 I liked “Hostage,” “Crash,” “Cinderella Man,” “Tarnation,” any film on www.themadparade.com.