Director Aaron Katz‘s 2006 SXSW Film Festival feature “Dance Party USA” is the story of teens, Jessica and Gus. The aimless pair connect at a 4th of July party, but when Gus shares a dark secret, their connection may be severed. Katz co-directed 2005’s “All the Stage is a World” with Chad Hartigan as well as comedy short “Hoopla” in 2004, which he also wrote. “Dance Party USA” opens Wednesday, November 15 at the Pioneer Theater in Manhattan’s East Village.

How old are you, and where did you grow up? What do you do when not making films?

I turned 25 two weeks ago. It was a Sunday and it was our one day off from the new movie that I just shot. I live in Gowanus, which is in Brooklyn, between Park Slope and Red Hook. I was born in Portland, OR and I lived there until I went to college. As long as I’m thinking about Portland, I have to say that I miss it, a lot. I like Brooklyn too, but especially in the fall I miss living in Portland. I do have a day job. I work at IFC Center as a projectionist.

What were the circumstances that lead you to become a filmmaker?

When I was young, I didn’t watch any movies or TV because we didn’t have a VCR and my parents didn’t let me watch TV. For some reason we didn’t go to the movie theater either. Then when I was a little older, we got a VCR and my dad would get Buster Keaton and Marx Brothers movies from the library. I loved those then and I still love them now. It wasn’t until the early ’90s that I started watching movies on my own. In middle school I got very interested in film very quickly. I was all about noir and Kurosawa and Preston Sturges. In high school I made several terrible movies on super 8. One of them involved two mob bosses (played by 16 year-old friends of mine in ill-fitting suits) playing chess. Each time a piece was taken we would cut to a sequence of people as chess pieces killing each other in various ways. Awful.I was also interested in acting at that time, but I decided to go to film school instead.

Where did you go to film school, and how did you find the experience?

I went to film school at North Carolina School of the Arts, in Winston-Salem, NC. As with most film schools there’s a lot of good and a lot of bad things about it. One of the good things is that you have the chance to make a lot of movies there over the four years, [and] I mostly tried different versions of the same thing. I was obsessed with doing very wide shots in long takes with no camera movement at all. I remember I had an argument with my DP during second year because she wanted to have some shots that moved and I didn’t want anything that wasn’t locked down. Eventually I let her do a couple dolly moves that I knew I wasn’t going to use. Even though it’s not the aesthetic of “Dance Party” I still like that kind of thing–the unmoving wide shots and the long takes–there’s something really intimate about people interacting and being close to each other in a huge huge frame.

How and/or where did the initial idea for “Dance Party USA” come about?

The initial idea came from living in Portland with my dad between second and third year of college. I didn’t have a car and, in fact, I still didn’t have a driver’s licence. As a result of this I took a lot of buses as well as MAX, which is the light rail system in Portland. I was taking the MAX one day to meet my friend downtown when I overheard a conversation very similar to the conversation between the two guys near the beginning of “Dance Party.” It was these two teenage guys shooting the shit and saying some of the most offensive stuff I’ve ever heard. My initial thought was something like, “Woah, look at this pair of assholes.” In spite of myself, I felt compelled to pull out my notebook and write down what they were saying. They got off before I did and as I rode the remaining stops to my destination I tried to remember things they had said before I got my notebook out so I could write those down too, and I started to think about what these two guys might be like beyond my first impression. Earlier in the summer I had also written down an interesting conversation between two girls that I had overheard and, I got the idea to put the two conversations together in the same script. As it turned out, we didn’t make the movie for another two years, but the script that I wrote then is pretty close to the script we shot. 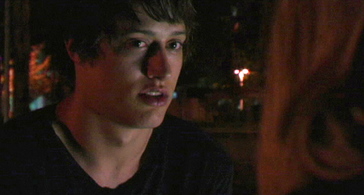 A scene from Aaron Katz’s “Dance Party USA,” which opens in New York Wednesday. Image courtesy of the filmmaker.

What were some of the biggest challenges you faced in either developing the project or making and securing distribution for the movie?

One of the main challenges was the idea that there are all these roadblocks stopping you from making a movie. You need all this equipment and all these crew members and to get those things you need money. There’s a feeling [out of film school] that it’s all overwhelming and that without some benefactor swooping in and financing the whole thing, you’ll never get anywhere. Where was I going to get $50,000 or $20,00 or even $10,000? I wasn’t going to get it anywhere, that’s where. During fourth year at NCSA I talked about fund raising with Brendan and Marc, the two producers of the film–also my roommates–but we had no real idea how to raise that kind of money. I didn’t want to think about it anymore because it frustrated me so much, but Brendan kept thinking about it and one day he told me that we were going to sit down and talk about how much money I had, and figure out how to make the movie with whatever amount that was. We counted it up, and it amounted to a little less than $3,000. So we figured out how to do it for $3,000. We decided to shoot it on the DVX100, which Zach–who cut the movie– already owned. I figured we could rent cheap or get for free a minimal sound package from a local equipment house in Portland, and we rounded up a small crew of friends who were willing to work for free. By the end of June we arrived safely in Portland, and set up shop quickly. A month later the rest of the crew arrived and we shot over the next three weeks.

There were a couple movies that Sean, the DP, and I wanted to look at for visual reference. We looked at parts of “Y Tu Mama Tambien” and “Ratcatcher.” That said, what I associate more with “Dance Party” was the movies we watched that summer that really had nothing to do with anything. I think those movies put us in a mood and had an indirect effect of things. The three I remember the most were “In the Mood for Love,” “The Last Detail,” and “High School.” We also saw “Alien Vs. Predator” in the theater. I’m not sure what effect that had.

What is your definition of “independent film”?

I don’t know that it’s important or maybe even possible to define independent film. I think the more important thing is for both distributors and audiences to take chances on worthwhile films no matter who made them or how much they cost.

What are some of your all-time and recent favorite films?

Ozu has made several of my all-time favorite movies. I love them because everyone is so polite and reserved, but filled with hurt, love, passion and regret on the inside, and I like them because they’re anti-sensational. Part of that is specific to Japanese culture at the time, but they also express a lot of truth about daily life anywhere. Another favorite of mine is “Playtime.” I think Jacques Tati is drop-dead amazing and I like “Playtime” the best out of his films. It gets better with every viewing. I love “The New World,” that’s both an all-time and a recent favorite. Other recent movies I liked were “Darwin’s Nightmare,” and about 45 minutes of “Mission Impossible: III” and “LOL.”

What are your interests outside of film?

Zoology and life science in general. If I wasn’t involved with film or writing I would want to be involved with science. Maybe studying animal behavior or working to find out more about how lesser understood ecosystems function and how they’re changing. There’s this British naturalist named Gerald Durrell who’s kind of my hero. He wrote a book called The Amateur Naturalist that I loved when I was a kid. I loved it because it presented a world that’s full of amazing things, not somewhere exotic and far away, but wherever you were at any moment.

To me success as a filmmaker is having the ability to keep making work that I’m passionate about. And to make that work with other people, like Brendan and Marc, who are also passionate. I just finished shooting “Quiet City,” which is my new movie. That was a great experience. There were some similarities in how we approached that to how we approached “Dance Party,” but there were a lot of new things too. Erin and Cris, the two main actors in “Quiet City,” were very exciting to work with. Unlike “Dance Party,” which is 95% scripted, “Quiet City” is almost all structured improv. Getting the chance to work like that was a big success for me. There’s other things that are larger in scope that I’d like to try out too. I’d like to make a Western based on the first half of this book called Flashman and the Redskins, and I’d like to make a comedy based around an ultra-modern experimental housing development. That one involves building houses and an airplane traffic jam. But those can wait. For the moment I’m very happy seeing the release of “Dance Party,” cutting “Quiet City,” and thinking up a new movie to shoot next year.