Director Paul Fox‘s comedy “Everything’s Gone Green” stars Paulo Costanzo as Ryan, a twentysomething slacker “willing” to fall into accidental success. After losing his job the same day he is dumped by his yuppie girlfriend, he gets a dispiriting job with a tacky lottery magazine, photographing winners and writing their stories. In his Mandarin-language class, he meets the lovely Ming (Steph Song) though she’s involved with a fast-talking scammer, Bryce (JR Bourne). Bryce uses a money-laundering scheme involving the new lottery winners and Ryan soon finds himself into the lifestyle of the suddenly rich and not-otherwise-likely-to-be famous… Fox won multiple film festival awards including best film at the Austin Fantastic Fest and the New York City Horror Film Festival in 2005 for “The Dark Hours.” First Independent Pictures begins opening the film in limited release beginning Friday, April 13.

What attracted you to film making, and how has that interest evolved during your career?

I was interested in movies at a very early age. My parents are big film buffs, so we went to the movies a lot as a family. I remember seeing the 1933 “King Kong” at the old Roxy Theatre in Toronto with my mom and being really struck by how movies could completely transport you to another world. It was like magic. Soon I got my hands on my Dad’s 8mm camera and started making Plasticine dinosaur movies. I was really into Ray Harryhausen, Famous Monsters of Filmland magazine, all that stuff. As I got older my interests shifted towards more “personal” filmmaking–I started frequenting the Toronto rep houses and watching films like “Mean Streets,” “The Wild Bunch,” “The Conformist,” “Don’t Look Now,” “Three Women“… the Cassavetes films… really dynamic, fascinating movies with complex characters, strong themes, and unique directorial visions.

Are there other aspects of filmmaking that you would still like to explore?

I like being able to tell different types of stories… To date I’ve made a psychological thriller (“The Dark Hours“) and now a comedy. I like the Howard Hawks career model where you can make a gangster flick one year, a screwball comedy the next, and a Western after that. I guess Ang Lee‘s career is kind of the modern equivalent of that. For me, story and character are the constant.

How did the idea for “Everything’s Gone Green come about?

Douglas Coupland, the Canadian author best known for his novels Generation X, All Families Are Psychotic, jpod, etc, wrote the original screenplay before I got involved with the movie, so I’m not sure what the genesis of the idea was, but he did tell me that his family actually had an experience where they thought they’d won millions in the lottery, only to discover that an aunt or someone had made a mistake, and that they didn’t have a winning ticket after all. I guess after something like that happens you either go on a bender or write about it. Or both.

Please elaborate a bit on your approach to making the film, including influences…

My main focus was on the character of Ryan, and ensuring that he was an engaging and real person that an audience would be interested in following for a couple of hours. Obviously casting Paulo Costanzo went a long way towards ensuring that that was the case. I also wanted the film to seem like a natural extension of Doug’s literary work, so I strived to create a tone that felt, well, “Couplandesque.” I utilized a lot of slightly off-kilter compositions and a kind of laid back, somewhat reserved approach to the comedy that I thought felt true to Doug’s voice. I also let the actors work off each other in a lot of wide frames and two shots without an excess of cutting, which allows you to create some interesting rhythms. There’s no composed score in the movie, either; my approach to music was to only use songs which the character of Ryan might listen to. The film’s editor, Gareth C. Scales, was 29, the same age as Ryan, when we cut the film so he was a very useful resource for pulling the songs together. We ended up with this great track made up of Canadian indie bands from across the country, which has gone on to become the first Canadian soundtrack picked up by Lakeshore Records in the US. I’m really proud of that soundtrack… and the CD hasn’t left my car’s player in months! 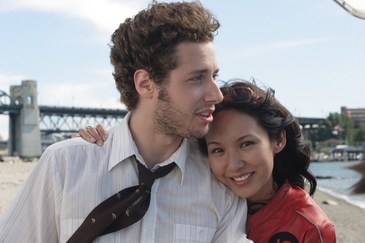 I guess my chief influences for this movie were probably Mike Nichols‘ “The Graduate,” and Billy Wilder movies like “The Apartment,” for the way they tread the line between comedy and drama. I also like how both those filmmakers used composition to create humour and meaning (although they both had the advantage of working in ‘Scope!). My goal with this film was to make a funny yet visually interesting and thoughtful comedy that could be an alternative to the current spate of dumb and/or gross-out comedies that fill our multiplexes.

What were some of the biggest challenges you faced in developing the project?

I guess the biggest challenge was simply the logistical one of shooting a locations-heavy movie with lots of characters in only 19 days. We had to be constantly on the move. But the number of locations, and their specificity, was important, as the city of Vancouver is almost like another character in the movie. Vancouver is a city that’s often used as Hollywood’s backlot, and in this film, Steph Song’s character is a set dresser whose job it is to disguise Vancouver as various American cities for the movies they make there, which allowed us to create a fun and colorful visual parallel to Ryan’s own search for identity.

What are some of your all-time favorite and recent favorite films?

John Ford’s “My Darling Clementine” is probably my favourite movie; it’s just such a simple, beautifully rendered film full of rich details and vignettes, with a great, subtle performance by Henry Fonda. Also “Rosemary’s Baby,” “The Sweet Smell of Success,” “The Wild Bunch”… and I just re-watched Vincent Minnelli’s “Meet Me in St. Louis” on DVD and was reminded of just what a stunning movie that is.

Recently, I thought Alfonso Cauron’s “Children of Men” was terrific; very exciting and amazingly directed. I also liked “The Lives of Others,” “Pan’s Labyrinth” and “Old Joy.” Robert Altman’s “Prairie Home Companion” was a beautiful and assured final film from one of the greats… I also found Jonathan Demme’s “Neil Young: Heart of Gold” surprisingly moving.

What general advice would you impart to emerging filmmakers?

Just make stuff, short or long, and get it out there. Keep doing it as much as possible, and be fearless about it. Too much time and energy can be wasted at the conception stage worrying about how a movie is going to be perceived by audiences and critics, and that pressure can derail you before you even get started. Just enjoy the process, make something you’re excited about, and have faith that if you like it, somebody else will too.

It’s so hard getting movies made and distributed these days… I’m just proud to have been able to get two completed and into circulation. The tricky part now is going to be getting the next two made!