Nearly three decades after attending the first Independent Feature Project market with his debut feature “Return of the Secaucus 7,” filmmaker John Sayles kicked off the 2007 IFP Market — and the umbrella event, Independent Film Week — with the U.S. premiere of his new film, “Honeydripper.” Hailed as the “First Couple” of the independent film scene by IFP board chair Ira Deutchman, Sayles and longtime producer Maggie Renzi were praised for remaining “fiercely independent.” Introducing Sayles and Renzi prior to the AMC Loews Lincoln Square screening, Deutchman added that “at a time when the defition of independent film is murky at best,” their work, “should inspire us all to do better.”

Deutchman’s Emerging Pictures backed Sayles’ “Honeydripper” and is planning a U.S. release later this year, working with Will Packer and Mark Wynns from Atlanta on a roll-out that will begin in New York and Los Angeles in late December and continue to Atlanta and Chicago in mid-January followed by other cities for Black History Month in February. Rezo Films is handling international sales. Joining Deutchman on stage Monday night, IFP executive director Michelle Byrd offered that “independent film, as challenged as it may be, is alive and well.” And saluting Sayles, on the official opening of IFP Market added, “Twenty-nine years later, he’s still here and we’re still here!.” 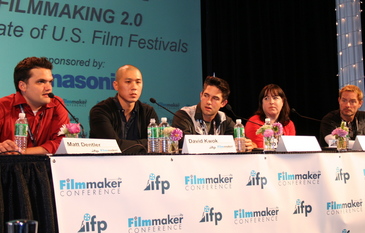 At the IFP Filmmaker Conference are festival programmers Matt Dentler from SXSW, David Kwok from Tribeca, David Wilson from True/False, Sarah Diamond from Slamdance, and David Courier from Sundance. Photo by Brian Brooks/indieWIRE

Earlier in the day at the Puck building, film festivals were a hot topic during the first day of panel discussions at the IFP’s Filmmaker Conference. Billed as a panel on “The State of U.S. Film Festivals,” an afternoon session delved into the sometimes tricky issue of festival virginity. The conversation included reps from the Sundance, Slamdance, SXSW, Tribeca and True/False film festivals and the group were quickly asked about the often sensitive and cutthroat topic of premieres by moderator Sharon Swart from Variety.

Most on the fest programmers agreed that premieres play an important aspect in their programming selections. “We are a festival looking for new talent. Sundance demands U.S. films be world premieres in competition,” said Sundance programmer David Courier. Meanwhile, Tribeca and SXSW insist on North American debuts for their feature competitions, which can lead to challenges for producers and directors. “It breaks my heart when I run into a filmmaker and they say they’ve screened their film already at the ‘Ho-hum’ film festival [making] their film essentially dead,” quipped SXSW Film Festival producer Matt Dentler.

Tribeca Film Fest programmer David Kwok urged filmmakers to do their homework ahead of committing to their premiere to find out what will work for their individual circumstances. “The thing to do is find what you need and decide what your needs are,” Kwok said, explaining, “We also don’t want to hurt films, so we have to let [good] films go sometimes.”

“Treat the premiere like losing your virginity,” emphasized SXSW’s Dentler. “Consider who you’re doing it with.”

The True/False Film Festival, a doc event in Columbia, Missouri, however takes a different approach to programming, catering more heavily to its local audience. “There’s no such thing as a premiere at True/False, it’s about films we love and we’ll work with other festivals to organize secret screenings,” said festival co-head David Wilson, voicing his event”s practice of sometimes showing “sneaks” ahead of the official U.S. or regional premiere at other festivals.

Still, the premiere reigns ever more supreme among the leading U.S. and international film events and the panelists emphasized that the scope and substance of their overall program also affects what is ultimately accepted. “We’re not just selecting 120 of the best films out there,” noted Sundance’s David Courier, regarding the lineup for his fest. “We have to be a well balanced program. We can’t have four great docs on Hurricane Katrina for instance — OK, maybe two…”

This Article is related to: Features and tagged Festival Dispatch, New York