“I believe in a universe of abundance and every filmmaker here will find their perfect audience, and hopefully a ginormous one,” enthused “Frozen River” director Courtney Hunt.” And thanking lead actress Melissa Leo, she said, “To Melissa, most of all… four years she stood by me and never gave up faith that this would become a feature film and that I would direct it.”

“When Carl and I began this journey we couldn’t have imagined that…out of that would emerge a story that is all baout survival and hope,” praised Tia Lessin, accepting the documentary grand jury prize for “Trouble The Water,” with co-director Carl Deal. 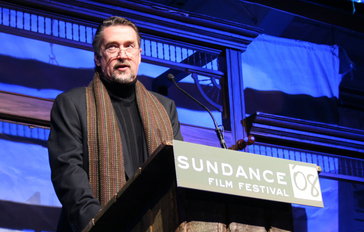 “As the festival comes to a close, I am struck by a profound sense of significance and emergence this year,” noted Sundance festival director Geoff Gilmore, emphasizing that we are “witnessing a new era of independent film.” Continuing, he added, “Mark my words, this is a class of filmmakers which we will remember years from now.”

“I just accepted an award from William H. Macy in a cowboy hat,” quipped Jonathan Levine, director of “The Wackness,” referring to the host of the evening’s master of ceremonies. “That is so fucking weird.” Continuing he added, “Thank you to the audience. I guess that is partially what this is about, [forming] a relationship with the audience, not necessarily making a relationship with studio or an agent…”

“A tick bit me in the ass when I started production,” recalled “Anywhere U.S.A.” director Chusy Haney-Jardine accepting his special jury prize, “I got Rocky Mountain spotted fever, I was in a coma, and now I am standing here today. Fucking a…”

“The past ten days I’ve be struck by the beauty and the power of the stories that you’ve chosen to tell,” Sundance Institute executive director Ken Brecher said tonight, welcoming guests to the festival awards ceremony tonight. “If we are the stories that we tell ourselves, we better chose them well.” Concluding the thought, Brecher added, “You have chosen very well and I thank you very much for that.”