A film from France won the top award and pairs of films from Italy and Latin America were honored with top prizes as the 2008 Cannes Film Festival came to a close tonight. Laurent Cantet‘s “Entre Les Murs” (“The Class”) won the Palme d’Or as a jury lead by Sean Penn presented the awards. The best director honor went to Nuri Bilge Ceylan for “Three Monkeys,” while Jean Pierre Dardenne & Luc Dardenne received the award for best screenplay for “Le Silence de Lorna.” Two competition films from Italy were among the big winners: “Gomorra,” directed by Matteo Garrone won the grand prix runner-up prize and the festival’s jury prize went to “Il Divo,” directed by Paolo Sorrentino. 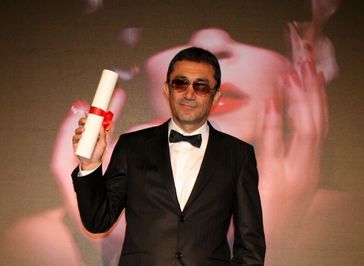 The recipient of an extended standing ovation, actor Robert DeNiro presented the Palme d’Or tonight prior to the festival’s closing night screening of his latest film, “What Just Happened.” Awarding the prize to Laurent Cantet, jury president Sean Penn noted that the award was chosen unanimously by the panel.

“Thank you so much, I’m moved that the film touched the jury unanimously,” Cantet beamed, accepting his award while surrounded by a large group on stage. The French film follows Francois, a high school teacher who is preparing for a new year in a tough neighborhood. Considered non pompous or overly strict, his extravagant frankness is often a surprise for his students. His classroom ethics, however, are put to the test when his students begin to challenge his teaching methods.

Later at a backstage press conference, Penn praised the “the generosity of his film,” while juror Marjane Satrapi noted, “There is almost nothing I believe in anymore. But if there is something I believe in, it is culture and education.”

On a night when the Cannes jury honored a French film, Gallic acting legend Catherine Deneuve took the stage to receive a special award tonight. The jury created a special Prix de 61st Festival de Cannes to celebrate the careers and new work of both Deneuve (“Un Conte de Noel”) and Clint Eastwood (“Changeling” or “The Exchange”). 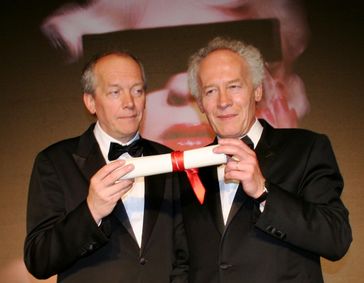 Jean-Pierrre and Luc Dardenne, winners of the screenplay prize tonight in Cannes. Photo by Eugene Hernandez/indieWIRE

“I’m deeply touched and deeply moved,” Denueve said, “It is such a joy for me to be able to make a fine and sensitive film such as ‘Un Conte de Noel’ (A Christmas Tale) by Arnaud Desplechin.” Concluding she added, “I want to continue making films as long as there are such fine and sensitive filmmakers working.”

“I’m really surprised, it’s a great honor for me,” Turkish director Nuri Bilge Ceylan (“Three Monkeys“) said while accepting his award on stage. “I’d like to dedicate this prize to my lovely and beautiful country which I love very much.” Later backstage, he noted his excitement, adding, “I don’t need awards, [but] my country needs awards.”

A pair of Latin American actors were honored for their performances tonight in France, Benicio del Toro was singled out for his role in Steven Soderbergh‘s “Che,” while Sandra Corveloni was honored for her lead performance in Walter Salles and Daniela Thomas‘s “Linha de Passe.”

” I have to dedicate this to the man himself, Che Guevara and I want to share this with Steven Soderbergh,” del Toro said, “He was there pushing it even when there [were lulls] and pushing all of us.” Later, at a post ceremony press conference, del Toro added, “I wouldn’t be here without Che and therefore this award belongs to Che too…It is a great night for being Latin American and it’s a great night for cinema.” 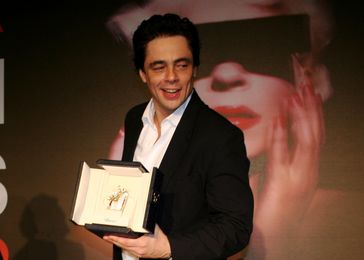