CANNES '08 DISPATCH | Voices from the Croisette: Woody Allen, James Gray, and the Dardennes on the D

“It’s always a neck and neck race with red ink,” quipped Woody Allen at the end of a Martinez lunch with a few journalists earlier this week here at the Cannes Film Festival. While discussing his acclaimed new film, “Vicky Cristina Barcelona,” Allen pondered the challenges of finding the funding to make his own movies, while at separate fest events this week the Dardenne Brothers and filmmaker James Gray — all Cannes favorites who frequently bring new work to the festival — discussed similar challenges facing the personal, auteur cinema typically showcased here each year.

On a short break from the New York shoot for his next film, a comedy starring Larry David, Allen candidly explained that as fond as he is of Barcelona, he went to Spain for his latest film because that’s where he found the money to make the picture. Making movies in the States can be particlarly challenging given the costs, so he secured $15 million to make his new film. “I realize that I don’t make enough money with my films to support a budget of $20 million,” Allen noted, “If they gave me $20 million they’d prob end up losing money, so I understand their position.”

“The sieve of what is considered marketable is narrowing,” Allen worried over lunch this week in Cannes.

That said, a couple more million would make the difference to Allen but given the strong reviews and marketable cast in his latest — Javier Bardem, Penelope Cruz and Scarlett Johansson — observers are thinking that The Weinstein Company will have a hit on its hands.

“I should be able to get a little more…Its easy from where I sit to ask for it, (but) from where they sit putting up $15 mil is a lot of money and they are nervous to lose it,” Allen added, admitting that he has had to put aside making more ambitious movies set in New York City or Paris. “I completely understand why they don’t give me $5 million more, $15 million more, $25 million more would be suicide for them.” 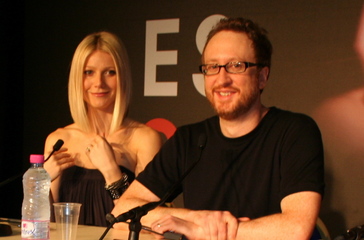 Filmmaker James Gray with actress, Gwyneth Paltrow at a press conference at Cannes earlier this week. Photo by Eugene Hernandez/indieWIRE

James Gray: Embarassed by the last 30 years of Hollywood movies

Railing against “the big business takeover of the movie industry,” filmmaker James Gray spoke of a system that he says is now very much against the writer-director. “Americans were amazing storytellers,” Gray proclaimed, seated alongside Gwyneth Paltrow at a press conference to discuss his Cannes competition entry, “Two Lovers,” earlier this week. Criticizing recent Hollywod trends that he feel undermine the creative success of past studio success, he said of the movies, “I have very little admiriation for what has been going on in my coutnry for the last 30 years.”

“I think the movie business is very similar to where Detroit auto makers were in the early 1970s,” Gray elaborated, “They think they know the perfect product. If you give somebody McDonalds every day and then you give them sushi on a day after 200 days of Big Mac, their reaction is going to be ‘What is that’?”

But continuing the thought he added that sooner or later, the studios may regret their focus on broader and younger audiences. “When i hear the studios say, ‘Thats not twhat the audience wants’, I want to kill them,” he noted, “I think people are much more open to it than the studios think.” 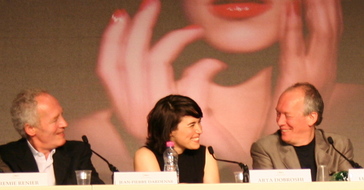 The Dardenne Brothers with actress Arta Dobroshi at the press conference earlier this week for their new film, “The Silence of Lorna.” Photo by Eugene Hernandez/indieWIRE.

Last year in Cannes, a heavy hitter roster of international filmmakers pondered the state of international cinema, a topic that came up this week during a conversation with Jean-Pierre Dardenne and Luc Dardenne, here in competition with their new film, “The Silence of Lorna” (Le Silence de Lorna).

The work of the brothers — hailed in Cannes with two previous Palme d’Or prizes — is part of a broader international cinema that some consider distressed. “We are not pessimistic about what you call the ‘author cinema’,” Jean-Pierre Dardenne told a journalist who questioned them on the matter. “There can be bad ‘author-type cinema that doesn’t have an audience, (but) at the same time we think that this type of cinema does have a future.”

Continuing, Jean-Pierre Dardenne added, “You should not talk about this author type cinema as too difficult or too experiemental…we shouldn’t create a ghetto around it. Perhaps this is rather simplistic, but what I am saying (is that) there are good films and there are bad films, whether they are ‘author-type’ cinema or not.”