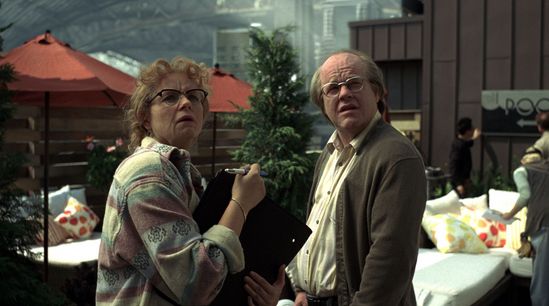 In terms of the political/social engagement of competition films at the 61st Cannes Film Festival, it isn’t too much of a stretch to say that Charlie Kaufman‘s “Synecdoche, New York” makes Arnaud Desplechin‘s dysfunctional family drama “A Christmas Tale” look like “Che,” or even “Waltz With Bashir.” Much-bruited, much-imitated screenwriter Kaufman’s directorial debut features a parade of obsessively self-examining characters that never so much as talk politics, let alone practice any. The depths of the self-obsession of its main character, Schenectady-based theater director Caden (Phillip Seymour Hoffman) are made vivid in one shot in which he’s half-hugging the toilet bowl and poking at his own feces, which he’s convinced have blood in them.

You kind of can’t blame the fellow. In middle age, one does, whether one likes it or not, become intimate with quite a few of the thousand natural shocks that flesh is heir to. After suffering a nasty assault from his bathroom sink, he bounces from physician to physician, each of whom weighs in on his progressive putrefaction. In addition, his artist wife Adele (Catherine Keener, cranky again but not quite the Maxine of the Kaufman-written “Being John Malkovich“) is not making much of an attempt to disguise her growing boredom with him; his four-year-old daughter, while a cute chatterbox, is emotionally distant, and his new mounting of “Death of a Salesman,” while a sellout, isn’t providing him with much in the way of artistic satisfaction.

Both earnest leading lady Claire (Michelle Williams) and frisky box-office attendant Hazel (Samantha Morton) offer potential distractions, which Caden resists. Then Adele buzzes off to a Berlin gallery show with daughter Olive and kinda skeevy best friend Maria (Jennifer Jason Leigh) in tow, buzzes off to Berlin for a gallery show. It’s soon clear that she and they are not coming back. Unexpectedly and miserably free, Caden tries to succumb to the zaftig, frank charms of Hazel — who lives in a house that is literally largely on fire — and, failing that, takes up with Claire. News (gleaned from an art magazine) that his now-ten-year-old daughter’s body is festooned with tattoos sends him, outraged, over to Berlin, where he can’t find anyone to confront. On returning to the States, he learns he’s received a genius grant and sets about mounting the work he thinks will give his life meaning: an ever-evolving simulacrum of his life, staged in a gigantic warehouse where he builds a replica of Manhattan.

A whole other cast of characters comes in to assume the roles of those we’ve already been following. Freakishly tall Tom Noonan’s Sam gives an earnest and spooky pitch as to why he should play Caden height aside. Emily Watson plays the woman who becomes the second Hazel. When not acting as their “characters,” these and other individuals form alliances that are then folded into the theater piece, the creation of which extends for decades, as Caden starts a new family, experiences worse heartbreak with his former one, and can’t seem to let go of anything. As in the warehouse life imitates art, which mutates life in boundless iterations and variations, to an extent that it’s almost impossible to keep up. For Caden all this seeming madness is in the service of one thing. He thinks, as he said, it’s the search for meaning. But it becomes clear that it’s really the denial of death. Death, of course, isn’t having it.

The early festival “buzz” on “Synecdoche” was a little dubious, as potential buyers (the film still hasn’t acquired a U.S. distributor) were reported as being less than lukewarm on the film. Their reaction can’t be blamed on the actual artistic quality of the picture, but rather its defining atmosphere, which is thoroughly bleak even at its most comic. (The film’s opening sequence, one of its funniest, parodies the chicness of related cultural bleakness; Caden awakes to an NPR-ish radio program devoted to the first day of autumn; the guest is an impossibly mannered academic who quotes Rilke, “he who has no home now will never have a home,” and generally brings everybody down.) Those who find the characters here maddeningly solipsistic will possibly be cheered by the intimations of apocalypse late in the film — see what happens when you don’t pay attention to the world we’re living in? — while everyone else engaged by the film gets a particularly (albeit weirdly) probing illustration of the second part of the well-known adage that begins “life stinks.”

The accretion of imaginative detail throughout the film is such that one could hardly be blamed for thinking that everything in it, from Hazel’s burning house to the micro-miniature portraits Alice paints, to Caden’s accidental, covert, extended stint as Adele’s housecleaner to the marriage counselor/self-help guru (Hope Davis) who seems to follow Caden around, and so on, and so on, is a metaphor. (The word “synecdoche” itself describes a relative of metaphor.) But in each case the next question is, a metaphor for what? Equally confounding is the question of just what is the reality inhabited by the film’s characters. In some scenes it very much resembles what most of us consent to term “the real world,” but then we’ll have a scene in one of Hazel’s fiery domiciles, explore the cavernous interior of a warehouse that’s stupendously bigger than any airplane hangar, or see a real petal drop off of a flower tattoo on one dying character’s arm. Certain peculiarities seem to offer correspondences to others; in one shot, two characters sit with a view of the East River as a gigantic, insanely long dirigible passes over the water, and one imagines such a craft would fit perfectly in the warehouse.

The world’s haywireness is in place early on, as Caden sees himself caricatured in a children’s television cartoon about…mad cow disease? Well, yes; much later in the movie, he concocts a new title for his project, which refers directly back to the cartoon. Is this just Kaufman being quirky, or is there a logic to it? Is pretty much the whole film a dream of one of the characters, as another critic was making a (persuasive) case for in the lobby of the Lumiere screening room mere minutes after the picture ended? Shockingly despairing as Synecdoche, New York can be, it offers such an abundance of imaginative material that it could conceivably be telling us that arguing about stuff is its own reward, and possibly the only point of living, as love never solves any of the characters’ quandaries here.