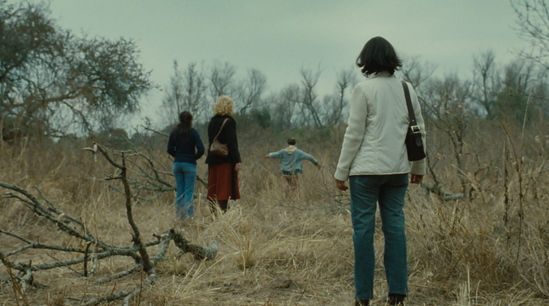 Cannes’ perennial post-screening boos are not to be trusted. Neither, for that matter, are the standing ovations. To each his own cinema, to be sure: one viewer’s masterpiece is another’s misstep, depending upon your taste and even where you sit. It’s been alleged that the Salles Bazin screening room is far less kind to a film than the bigger venues.

Either Steven Soderbergh‘s “Che” epic is an ambitious historical masterpiece or an unfinished mess (judging from the mix of cheers and jeers reported after its premiere); James Gray‘s “Two Lovers” is a moving, delicate study of unrequited love or a clumsy, preposterous portrait whose casting and story doesn’t congeal (I’d opt for the latter). Similarly, Lucrecia Martel‘s “The Headless Woman” also screened to a divided response; although in this writer’s opinion, Martel’s film is one of the competition’s most mesmerizing entries.

If Martel’s follow-up to “La Cienaga” and “The Holy Girl” drew a few boos after its world premiere, perhaps it was because expectations were too high or audiences weren’t patient enough. After all, the Argentine filmmaker’s first two movies were more unanimously appreciated, and by day eight in Cannes, critics were desperate for something easy on the eyes (maybe that explains the fawning over Clint Eastwood‘s “Changeling“). With “The Headless Woman,” Martel narrows her focus, both narratively, in its concise examination of a single woman, and literally, with its frequent, evocative use of long lenses that isolate her protagonist from the blurred-out surroundings. Few filmmakers use focus as effectively and incisively as Martel.

With a curly head of dyed blonde hair, Vero (Maria Onetto) is that typical upper-middle-class Martel protagonist, whose privileged status is put to the test over the course of the story. The plot is set in motion when Vero, driving obliviously in her car, hits an object in the road. In the distance, it appears to be a dog. But Vero’s post-traumatic shock suggests the accident is far more severe. In the days after the accident, Vero seems to barely remember who she is or what she does, smiling vacantly at those around her. Just as disturbing, friends and family don’t really appear to take much note of her newly spaced-out behavior.

Inspired by Martel’s dreams and nightmares, “The Headless Woman” is moody, mysterious and suffused with ominous portents and subtle critiques of the bourgeoisie. When Vero dyes her hair from blonde to a more natural brunette, we might expect this change to signal growing self-awareness or comeuppance. But, in fact, it’s just one more cover-up (she admits her real hair color is gray by now) in a film about multiple cover-ups–and the elite’s singular ability to block out the harshest realities, pretend they don’t exist and live in vacuous ignorance.

Dividing audiences, it seems, is what Cannes does best. Two people talking about a film can often share similar views, but as soon as you get a group of 3-4 critics together, consensus goes out the window. Take Kiyoshi Kurosawa‘s Un Certain Regard entry, “Tokyo Sonata,” a trenchant look at crises of authority in a Japanese family and the culture at large, that engages for the first hour, and then spins out of control. Is the disorienting third act a sign that the film has lost its way or does it point to Kurosawa’s uniqueness of approach? A number of critics have gone to bat for the film (from Variety’s Derek Elley to Cinematical’s James Rocchi), but I’m not entirely convinced. The film’s surprising final narrative turn – with its outbreak of violence (however non-threatening) – vaguely recalls the genre work for which Kurosawa is most known (“Cure,” “Pulse“). What’s more illuminating about the film, however, is the straightforward family dynamics–a downsized salaryman who keeps his unemployment a secret and his young outspoken son, whose creative passions suggest an ultimately hopeful Japanese future, as long as it’s not squashed by the insecurities of the older generation.

At least Kurosawa’s film comes with obvious conflicts and emotional characters. Talk about critical division: there’s nothing like an opaque uber-art film to foment opposing reactions, such as Hungarian director Kornel Mundruczo‘s “Delta” (“almost a parody of an art film,” said one critic, while Screen called it a “poetical portrait of nature in the raw”) or Lisandro Alonso‘s “Liverpool,” another long-take poetic realist vision from the director of “Los Muertos.” This is challenging cinema whose vagaries and ambiguities make “The Headless Woman” look like “My Fair Lady.” Far from accessible, as some Alonso devotees have suggested, “Liverpool” chronicles a cargo ship worker who goes ashore to find his estranged mother, but there’s little for a viewer to latch on to in the barely registered relationships and minimalist interactions. Of course, the film is exactingly photographed, with its cool images of rural southern Argentina, and mystifying in the way it withholds its story, but ultimately, “Liverpool” is a pain to get through and richer in retrospect.

Even a film as minor as “The Pleasure of Being Robbed,” Josh Safdie‘s no-budget American indie, which closes Directors Fortnight on Friday, has drawn sharply differing reactions; one prominent critic walked out exasperated after 30 minutes; another delighted in the film’s unabashed amateurism. Shot in shaky, handheld 16mm, “Pleasure” follows a dim-witted basket-case (Eleonore Hendricks) who steals stuff from strangers on the streets of New York. If some viewers will see her antics as adorably eccentric, others will find an annoying young woman in need of serious medical care. First-time director Safdie loses points with unfunny bits of quirk and forced whimsy (i.e. a guy goes into a bar, proposes to buy everyone drinks, then rescinds his offer when he sees all the people). Most of the film is just too precious in its depiction of this messed-up pixie, particularly an extended scene in which the director appears, himself, as another strange, quirky sort. If it weren’t for an unexpected daydream sequence late in the film, I would have written it off entirely. But this singularly surprising moment finally lets us into the screwy girl’s weird mind, going to a fresh and unexpected place. The headless woman, indeed.

One wouldn’t expect agreement about a James Toback film, but of all the movies in Cannes, the controversial director’s documentary portrait “Tyson,” about the infamous boxer, is one of the few that has received near unanimous praise. Tyson, of course, is an easy subject, fucked-up in the head, a monster of a man and as vulnerable as a little boy–and he talks and talks and talks. At certain points in the film, Toback splits the screen into multiple frames, showing Tyson repeatedly and overlapping his dialogue–a keen device that accurately evokes Tyson’s fragmented self and his “chaos of the brain.” What emerges most prominently, however, is Tyson’s fear–the most repeated word out of his mouth is “afraid.” It’s not an amazing piece of filmmaking or incredibly revealing, but it’s an engaging diversion all the same, like watching something good on HBO. And that may be just what the critics and journalists need after a week of non-stop movies.