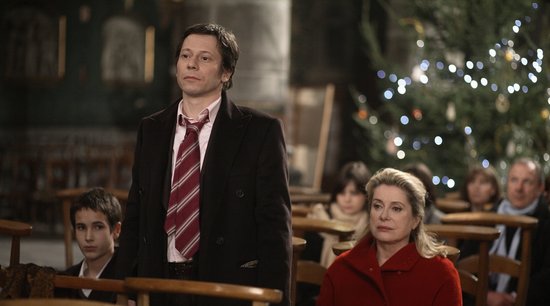 Rainy days here in Cannes may have dampened morale, but the films, and a much-needed burst of sunshine on Sunday morning, have boosted critics’ spirits. Aside from “Blindness,” Fernando Meirelles‘ apocalyptic opener, which received a mixed response, this year’s competition slate has yielded a satisfying crop of art-cinema–though no masterpieces have yet emerged. Critical consensus has Arnaud Desplechin‘s “A Christmas Tale” as the competition’s front-runner so far, though the animated Israeli drama “Waltz with Bashir,” which screened on day two, also played extremely well.

Like “Kings and Queen,” Desplechin’s previous look at family legacy and dysfunction, “A Christmas Tale” is a carousing, innovative glimpse into the fragmented Vuillard family. After six years away from each other, the clan comes together for the sake of their matriarch (Catherine Deneuve), recently diagnosed with leukemia and in need of a bone marrow transplant from one of her brood: the melancholic, controlling eldest Elizabeth (Anne Consigny), the obnoxious, alcoholic middle-child Henry (a scene-stealing Mathieu Amalric) and the vulnerable youngest Ivan (Melvil Poupaud). Predictably, the family’s coming together creates psychological mayhem for all those involved, but Desplechin takes the holiday reunion melodrama and flips its every which way, cutting away from scenes before you expect and utilizing a host of cinematic tricks, from irises to direct-camera monologues to enliven the proceedings. The result is vertiginous and anything but expected. Witty, profound and highly literate–with references from “A Midsummer’s Night Dream” to Friedrich Nietzsche, the film is both a uniquely emotional and intellectual experience, as much about familial relationships as death, despair and madness.

The haunting center of “A Christmas Tale” – the death of a first sibling at the age of six – also lingers over another strong competition entry, Turkish auteur Nuri Bilge Ceylan‘s latest “Three Monkeys.” While not as satisfying as his previous Cannes stunners “Distant” and “Climates,” the film confirms Ceylan’s photographic mastery, of landscape-as-psychological vista, and his incisive excavation of a certain type of male, unwilling to face the consequences of his actions. The story concerns a wealthy businessman who persuades his driver to take the fall for a hit-and-run committed in the dead of night: nine months in jail with a healthy pay-day when he gets out. In the meantime, we meet the other monkeys, presumably a reference to these Ceylan-drawn human species who act on basic instincts rather than reason: the driver’s wife and his mature son. The film’s hi-definition video images are blanched and grainy, lending a vaguely surreal air to the film’s hot summer coastal setting along with the secrets, lies and barely repressed recent tragedies that hover over the characters’ psyches. That phantom past reemerges in two spectacular moments in the film; jarring and disturbing, the scenes create an unnerving effect that lasts longer than just about anything else yet seen on screen here.

If “Three Monkeys” should please Ceylan’s admirers as another evocatively shot meditation of his pet concerns, including human disconnection and gender warfare, Jia Zhang-Ke‘s competition film “24 City” similarly continues the Chinese filmmaker’s interests in a changing China, of old verses new, Communist-era industrialization verses the country’s 21st century hyper-capitalism. Ostensibly a series of monologues with workers, punctuated with powerful human tableaus and trenchant images of the dismantling of Factory 420, a storied industrial site, Jia’s poetic vision of demolition and progress takes on disturbing new resonances after the recent earthquake that killed thousands of people in the same area where the film takes place. One has to wonder whether 24 City, the high-rise luxury apartment complex that has replaced Factory 420, is still standing. Either way, Jia’s masterful aesthetic remains consistent, mixing documentary and fiction with intriguing results. The film takes an ironic turn with the story of “Little Flower,” a middle-aged former factory worker (played by actress Joan Chen) who received her nickname because she looked like Joan Chen in a famous ’70s movie called “Little Flower.” While Chen’s performance is memorable, the film’s most affecting moments belong to the real-life older citizens, men and women who devoted their lives to work, now made unnecessary and obsolete. 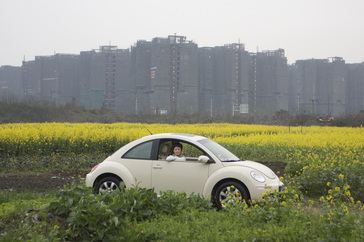 Like his previous films, Jia isn’t subtle about the strange disconnect of modern China with its past. This is made all the more obvious in the film’s concluding chapter: a pretty young woman Su Na (played by Chinese starlet Zhao Tao) has abandoned the factory life of her parents for a job as a “shopper,” traveling to the big city to buy brand name goods for rich people who don’t want to lift a finger. “I want to make lots of money,” she says.

Just as Jia’s characters are trapped in a life-long cycle to make a buck, so, too, are the protagonists of Walter Salles and Daniela Thomas‘ “Linha de Passe,” an accomplished, though unremarkable competition film that never rises above its familiar tale of a poverty-stricken family. Concerning a single mother, raising her four children, from an 18-year-old aspiring soccer player already past his prime to the youngest, a dark-skinned boy in search of his father among Sao Paolo’s bus drivers, the film skillfully interweaves its multiple storylines. Smartly, Salles and Thomas avoid any melodramatic excesses, leaving the drama to play out in more subtle ways.

Outside of competition, a number of films in the festival’s Un Certain Regard section have pleased critics, including British artist Steve McQueen‘s IRA prison strike film “Hunger,” James Toback‘s documentary about the infamous Mike Tyson, and “Tokyo!,” an admittedly uneven, but worthwhile omnibus project, which include Michel Gondry‘s sweet-natured magical-realist look at space constraints and utility in the Japanese capital, Leos Carax’s obnoxious, funny and very strange fuck-you to the Japanese “Merde,” and Bong Joon-Ho‘s beautifully conceived love story “Shaking Tokyo,” a personal highlight. Though coming at the end of the Carax, just about anything might feel refreshing, “Shaking Tokyo” imagines an obsessive agoraphobic man, trapped inside his orderly home for over ten years, who suddenly thrusts himself into the outside world with tremulous, trembling and transcendent effects. It resembles a little bit how one feels, after emerging from days of rain and hours of screenings, into the finally emerging sunlight.