DISPATCH FROM MASSACHUSETTS | Nearly 10 Years and Counting: Creative Capital Convenes the Class of ' 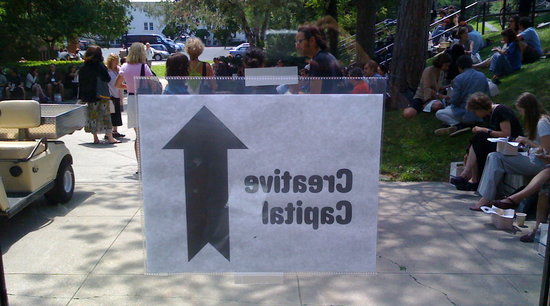 Nearly ten years ago, at a Manhattan cocktail party celebrating the launch of the Creative Capital Foundation, board member Richard Linklater reflected on the significance of receiving a small state arts grant early on in his career, back before making “Slacker.” Despite the limited amount of cash, the funding was just the encouragement he needed to continue his pursuits as a filmmaker. For almost a decade now, Creative Capital has been giving modest-sized grants that not only validate artists, but help them develop skills and sustain a livelihood through their own creativity. The idea of a foundation offering both funding and broader career support is invaluable, but rather unheard of. As one seasoned Creative Capital grantee admitted during a private consultation at the organization’s sixth artist’s retreat this weekend, “After Creative Capital, I never thought of a foundation as simply a place to get money.”

Some 250 artists and consultants gathered in dormitories and auditoriums at Williams College in nortestwern Massachusetts over the weekend to talk about the state of various arts disciplines, while getting a taste of many of the Creative Capital backed films, installations, performances and other projects currently making their way in the world.

At the heart of the weekend were nearly nine hours of presentations showcasing 70 Creative Capital projects, each artist given just five to seven minutes to offer a glimpse at their work and pitch an auditorium full of colleagues on their needs for getting the project to the next level. Of the new film projects presented this weekend, most of which were documentaries, filmmaker Lynn Hershman Leeson‘s “(H)ERrata: Women, Art and Revolution” drew an extended, rapturous response. 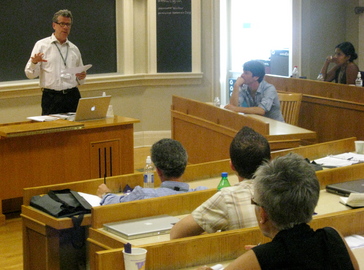 “By the time I got my Creative Capital grant, I had been shooting my film for 40 years,” Leeson quipped during her presentation. For decades she has been documenting female artists, amassing some 250 hours of footage that she is currently editing. “This film is absolutely not objective,” she said, in narration offered during an extended clip from the film, calling the project, “An insistent history that refuses to wait any longer to be told.” Leeson expects to have a 90-minute rough cut ready by October and she is planning to built out a web-based archive, utilizing wiki software, to offers all 250 hours of interviews.

Equally compelling among the 2008 funded projects was the latest from filmmaker Laura Poitras, an in-progress documentary that had retreat attendees buzzing all weekend after witnessing some of the project’s provocative footage. Her latest documentary, “Release,” is the second in a trilogy looking at post 9/11 America. The documentary explores Guantanamo and Al Qaeda but Poitras asked those in attendance to refrain from talking about the striking scenes and the people seen on camera because of the sensivitity of the subject. Admitting that she is currently on the U.S. terror watch list, Poitras explained, “(I am) trying to tell good stories that move people.”

Marshall Curry‘s follow-up to “Street Fight” is “If a Tree Falls.” With co-director Sam Cullman, Curry is exploring the Earth Liberation Front and organization member Daniel McGowan, looking at how the Queens, NY native became involved with the controversial activist group. “Day Dream,” from Rodney Evans (“Brother to Brother,” “Close to Home,” “The Unveiling”), is the story of jazz legends Buddy Bolden and openly gay composer Billy Strayhorn. And, Cauleen Smith (“Drylongso”) is developing re-make of Hitchcock’s “Rebecca” inspired by Nigeria’s Nollywood film industry, while veteran Jay Rosenblatt talked about his latest, “Thoughts of Suicide,” a 30 minute lyrical collage film about suicide. The filmmaker also noted that he is hoping to present a feature length collection of his work in theaters next summer.

Living Color frontman Vernon Reid and filmmaker Brad Lichtenstein, who founded and heads docUWN, the doc center at the University of Wisconsin in Milwaukee, are developing a unique new film. Calling it “a mash-up of a movie,” Reid and Lichtenstein’s “What We Got: DJ Spooky’s Quest for the Commons” is a documentary and interactive website that follows DJ Spooky (Paul Miller) in his search for “The Commons”, desccribed as “a fictious location in which sampling and remixing of history, media and other sources is entirely free.” Presenting the project this weekend, Lichtenstein called it a “transmedia experience,” and noted that he and Reid are working with such notables as Henry Poole, Jonathan Lethem, Sam Pollard and even Norman Lear as an advisor. 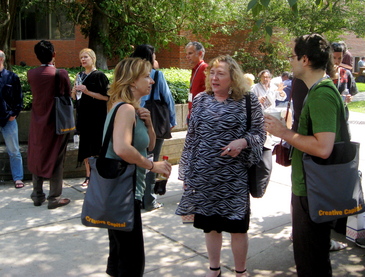 “It’s not just the money,” Lichtenstein reiterated, thanking Creative Capital for their backing, “but for the support…for trying to do something different.”

Weaving documentary, animation and knitting to explore the history of American wartime craft work, Cat Mazza‘s “Knit for Defense,” was well received this weekend as was Tara Mateik‘s “Man Behind the Curtain,” a hilariously subversive re-working of “The Wizard of Oz” incorporating a transgender Diana Ross impersonator. The rousing clips that left retreat attendees cheering on Friday night involved reinterpretions of Ross’ classics “Endless Love” and “I’m Coming Out.” On Saturday night, after an outdoor BBQ, retreat attendees danced on the floor of a Williams College cafeteria, encircling Mateik as he moved to “I’m Coming Out.”

The artist presentations over the weekend retreat were balanced out by seminars, workshops, and one-on-one sessions with consultants from the film and arts communities, conversations often marked by a generally healthy tension between art and industry. While the organization is passionate about showcasing distinctive work, it was formed in a spirit of what executive director Ruby Lerner refers to as “cultural enterpreneurship,” pulling from some of the concepts employed in the venture capital world. Already, four grantees (Barbara Hammer, Sam Green, Sandi Dubowski, and Brent Green) have given back to Creative Capital, sharing profits with the organization to support the funding of other artists.

Closing in on its 10th anniversary, Creative Capital has already funded 283 projects from nearly 350 artists. Speaking to the enthusiastic gathering of retreat attendees over the weekend, Ruby Lerner announced a new $1 million donation from the Doris Duke Charitable Trust, touted support from the estate of the late photographer Theo Westenberger and bubbled with excitement over a planned multidisciplinary MoMA exhibition in honor of Creative Capital on tap for the spring of 2010.

Finally, Lerner also revealed that Creative Capital will be a Harvard Business School case study. “The business venture capitalists could learn a lot by studying the Creative Capital model,” Lerner quoted Harvard’s Dr. Felda Hardymon, this weekend, stirring another hearty round of cheers from the retreat guests.

For more information on Creative Capital, visit the organization’s website.

EDITORS NOTE: A consultant to Creative Capital during its first year of operations, Eugene Hernandez also served as a consultant at this year’s artist’s retreat.