New York saw at least one triumph in an unlikely field this week, as MoMA saluted Zeitgeist Films, still going strong at 20 despite the failure of countless other distribution companies. And those interested in Japanese film were awash in opportunity; besides the continuing Nakadai retrospective at Film Forum, Lincoln Center celebrated animator Satoshi Kon with a mid-career retrospective, and Japan Cuts offered a look at the range of contemporary Japanese cinema.

Everybody was feeling the love at the Museum of Modern Art on Friday night, as the museum officially launched its series “Zeitgeist: The Films of Our Times,” marking just about the only positive news afforded to an independent distribution company these days. Started in 1988 by New Yorkers Nancy Gerstman and Emily Russo, the company carved out a comfortable niche for itself distributing artistic fare from the likes of Derek Jarman, Atom Egoyan and Bruce Weber. Zeitgeist has maintained its position in today’s wintry climate by continuing to be highly selective in the work that it chooses, ***despite any number of successful films, including Oscar-winning “Nowhere in Africa,” “The Corporation” and “Into Great Silence.”

Todd Haynes came to town just for the event, for a screening of his breakthrough film “Poison,” as well as his short film “Dotty Gets Spanked,” both of them distributed by Zeitgeist. “We’ve been in love with Todd since his first film, which we’ve all maybe seen underground, “Superstar: The Karen Carpenter Story” introduced Russo before the screening, referencing Haynes’ biopic of the Carpenters singer using Barbie Dolls. When music rights prevented that film from legally receiving distribution, the women were quick to acquire his next project, the three-part queer opus “Poison,” which was funded — somewhat controversially — through visual arts financiers, including the NEA. “The film won the Grand Jury Prize at Sundance,” recalls Russo, “Nancy and I were not there at the festival- we didn’t have the budget to go out — but it was an incredibly exciting moment for all of us. It’s remained a seminal film, a touchstone film of that time.”

Haynes returned the love. “They are, without a doubt, the best distributors and the best people I’ve ever worked with,” gushed the director. “They wanted to distribute it even before we were done, so we had distribution for this art film at a time where that isn’t something filmmakers in their right mind should ever expect or anticipate… As it turned out, the film became a subject of great discourse and debate, one of the early films branded with the “New Queer Cinema” mantle that fell into a lot of controversy from the right. It definitely catapulted the film to a certain visibility that none of us anticipated.”

After the screening, MoMA held a lovely reception for the company in the garden, filled with Zeitgeist’s colleagues and friends, all of whom seemed to agree that it was hard to salute a more deserving company.

“Zeitgeist: The Films of Our Time” continues at MoMA through July 23, featuring appearances by directors Atom Egoyan, with “Calendar” on the 12th, and Dan Geller and Dayna Goldfine with “Ballet Russes” on the 19th. Also be sure to check out the Zeitgeist’s current theatrical offering, Guido Santi and Tina Mascara‘s beautiful documentary “Chris and Don: A Love Story.”

Also on Friday night, the Film Society of Lincoln Center served as a haven for pasty geeks all over the city as it launched its mid-career retrospective of Japanese animation director Satoshi Kon, whose wild fantasy films, such as “Perfect Blue” and “Tokyo Godfathers” have found eager audiences despite the fact that they do not feature big breasted alien women, melting heads or tentacle rape. 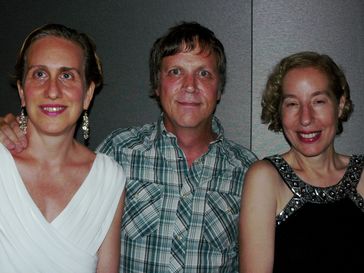 Well, maybe a little tentacle rape in Kon’s most recent film, “Paprika,” which screened as part of Friday night’s “Evening with Satoshi Kon,” but it’s a different context than you might be expecting. The story of a dream-controlling device wielded by a power-hungry madman in order to sap the world’s psychic powers, Kon’s most successful U.S. release to date is essentially one long, hallucinatory chase sequence between several realities.

“It’s a great honor to have a retrospective like this in New York,” said Kon at the Q&A after the film, through a translator. “I haven’t even had one in Japan. I’ve only made 4 feature films and 1 TV series, and I’ve already received a retrospective, which is a great honor. Part of me thinks that I should just retire or die now, because that would be better for my reputation.

Kon discussed his influences with the audience, saying, not surprisingly, “as far as Disney goes I wasn’t familiar with it as a child,” but continuing, “I loved all animation…if it was a moving image, it made me very happy.”

Kon also used to work as a Manga writer, a career he claims he enjoyed, even if was not particularly successful with. “I still love to write Manga, and sometimes I think I would love to go back to it at some point in my career. The big difference is the presence of sound and movement — right now I get a great pleasure from creating moving images.”

Continuing the celebration of all things Japanese, this week marks the beginning of the second annual Japan Cuts series at the Japan Society, a survey of contemporary Japanese films that is running concurrent to the New York Asian Film Festival.

“Last year was the 100th anniversary of the Japan Society,” explains programmer Ryo Nagasawa, “So we wanted to do something bigger usual for the film program. We felt like recent Japanese films don’t have much exposure over here, so we wanted to focus on what’s hot that’s coming out of Japan.”

After last year’s warm response, the society opted to continue the tradition this year, screening 18 U.S. and New York premieres over the course of 11 days, including a broad survey of genres — documentaries, animations, and straight-forward narratives.

“You see a lot of genre films being talked about in the US,” says Nagasawa, “horror and anime, but it’s so hard to see the comedies, dramas, or documentaries make it over here.”

Nagasawa was particularly excited about the screening of Mika Ninagawa‘s “Sakuran,” which premiered at last year’s Berlinale. “This is a film about courtesans that was made by a Japanese woman. We wanted to change the images of geisha from the Hollywood “Memoirs of a Geisha,” which was full of stereotypes.”

The series kicked off last night with Naomi Kawase‘s deliberately paced examination of grief, “Mourning Forest,” preceded by the same director’s brutal 40 minute short “Tarachime,” which opens on the close-up of a human organ (possibly a placenta) and features copious close-ups of Kawase yelling at her extremely naked 90 year-old great aunt.

“We also have more popular films,” concedes Nagasawa, referencing the co-productions with the NYAFF, which include the latest Takashi Miike film, “Sukiyaki Wester Django,” as well as Yusuke Fujita‘s “Fine, Totally Fine,” which boasts the promising premise that a group of slackers facing their 30th birthday plan to create the scariest haunted house ever.

The festival continues through July 13.

This Article is related to: Uncategorized and tagged New York