Alongside “Slacker,” “Roger & Me,” “Poison,” “Sex Lies and Videotape,” and “Paris Is Burning,” nearly twenty years ago Whit Stillman‘s “Metropolitan” marked a distinctive moment in American independent filmmmaking. Yet two decades later, the film is not as widely available as other classic U.S. indies. All that changed when the film debuted last night, for free, on Hulu. Asked how he feels about having the film re-surface online, Stillman deadpanned recently via email, “Great. Not having made a film in so long, I’m keen to have the existent ones available all ways possible.”

Set during the end of Manhattan’s iconic Upper East Side debutante world, “Metropolitan” follows outcast Ivy League student from the wrong side of the park, Tom Townsend (Edward Clements), who gets drawn into the exclusive and upper-crust preppy circle of formal winter balls. The film introduced Chris Eigeman as the outspoken and critical Nick Smith, also featuring Carolyn Farina, Dylan Hundley, Taylor Nichols, and Allison Parisi. Its witty depiction of Manhattan life would certainly seem to have influenced later New York City-based films by Noah Baumbach and Wes Anderson. It was the first film in Stillman’s thematic trilogy that later included “Barcelona” (1994) and “The Last Days of Disco” (1998).

After studying at Harvard and working in publishing, Stillman was in his late 30s when he made his mark on the indie scene, launching the $300,000 film at IFP’s Independent Feature Film Market in 1989 and then narrowly securing a slot at the Sundance Film Festival before screening at New Directors, New Films later that Spring. He went on to earn an Oscar nomination for best screenplay and, as John Pierson notes in his essential Spike, Mike, Slackers, and Dykes, Fine Line Features was formed the follwing year in the wake of the film’s success at New Line Cinema.

“I remember getting turned down by Sundance originally,” Stillman recalled in an interview with indieWIRE 10 years ago, “I remember all the people kind of not liking the film or not thinking it was commercial in the first screenings. People see anything that’s kind of strange in what it’s doing and it’s very natural to kind of doubt its ability to survive in the marketplace.” 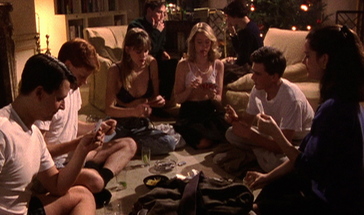 So, apparently not much has changed in twenty years. It took the tirelessness of sales rep and the passion of a few well-placed film critics to get the film noticed. Asked this week what he thinks about the ways that the business of independent film has changed since he made “Metropolitan,” Stillman said, “Well, things were bad then, too.”

“As a completed film, ‘Metropolitan’ was rejected everywhere, even by Sundance,” Stillman recalled this week, “Thanks to [Sundance programmer] Tony Safford, the film finally got into the festival after which, despite a great reception, it still remained bereft of distribution. If it hadn’t been for Ira Deutchman as our producer’s rep, Lindsay Law (who bought the film for American Playhouse, allowing us to pay our lab bill), Sara Risher and Bob Shaye of New Line, and supporters in the press such as Roger Ebert and Vincent Canby — all of them — the film never would have come out.”

While re-licensing the film for television, watch for it on Sundance Channel, Stillman and his reps at Cinetic Rights Management decided to pursue an online release of the film. Readily available on VHS back in the day, “Metropolitan” is more rare on DVD here in the United States, save for a single “Criterion” edition. Despite the lack of distribution, younger folks have been able to catch it on television or via Netflix.

“Thanks to the Criterion edition and some supporters at the cable channels, the film seems to have gotten a new audience,” Still noted, “As it was old-fashioned and passe when made — intentionally — the film doesn’t seem to have lost much with the passage of time.”

Since making his three features, Stillman has lived in Paris and other European cities, but is spending time in New York now. Asked how he reconciles his own inspirations for the film with the way the city is today, he commented — sounding like one of the characters from his films — “I am far more ambivalent about the role of wealth in the city — no longer having any.”

At lunch in Manhattan yesterday, Stillman continued to press the flesh trying to get a few projects off the ground. Among them is “Dancing Mood,” a film he calls “an early ’60s Jamaican story…which has the advantage of characters and themes far more sympathetic sociologically than the poisonous preppies (I write as one) of the earlier triptych. Whoever backs it is going to be very rich!”

“Now independent film is again at the low ebb of a cycle, which is probably a very good time to put new ventures in the works,” Stillman told indieWIRE this week, “It’s painful to hear the formulas enunciated — casting, budget and marketing mantras — by which judgment, intelligent effort and showmanship are to be replaced.”

“Metropolitan” is available for the next few weeks on Hulu.com