The 2008 Toronto International Film Festival is winding down. With just two days left before the Closing Night Gala and the announcement of the awards, many industry folk have begun to head out. But there remains much to discuss, as the last few days was obviously marked with a large amount of worthy events. indieWIRE looks over just a handful of them, including the premieres of Adria Petty‘s “Paris, Not France,” Matt Tyrnauer‘s “Valentino: The Last Emperor,” Matt Aselton‘s “Gigantic,” and Derick Martini ‘s “Lymelife.”

“Doesn’t anyone want a picture of me?” Thom Powers asked a pre-occupied crowd at the Ryerson Theatre in Toronto Tuesday night. As Powers tried to begin his introduction of Adria Petty‘s documentary “Paris, Not France,” dozens of audience members were distracted taking photos of Petty’s subject, Paris Hilton, who was sitting in the crowd. Once they calmed down, Powers brought out Petty. “Up until this moment, I wasn’t sure if I could do this,” said Powers. “But it gives me great pride to bring out Adria Petty.”

“Paris, Not France” has been the subject of some controversy at the Toronto International Film Festival. Just days before the festival began, it came out that the festival had reduced its screenings to just one, allegedly due to pressures from the Hilton camp. William Morris agent Cassian Elwes sent out an e-mail to acquisitions and buyers an hour before its Tuesday screening, noting:

“With less than one hour to go and no restraining order in place, I feel comfortable now letting you all know that this film was the subject of legal threats and was almost not shown at all here at the festival… This version will probably never be seen again. I am hoping that Paris will see, with the audience tonight, that there is nothing to be afraid of here. And will eventually let the film be distributed…”

One can only assume Hilton felt as Elwes had hoped she would. The film – made with Hilton’s cooperation – does not at all portray Hilton in a negative light. On the contrary, it paints a portrait of her as an intelligent, media-savvy woman whose public identity has been a construct of society’s obsession with a certain kind of celebrity. Complete with home videos from her childhood, candid interviews with Paris herself, as well as with her parents and sister Nicky Hilton, Michael Musto, Donald Trump and Camille Paglia, the film gently deconstructs the construction of Paris Hilton.

indieWIRE talked to Adria Petty the afternoon after the film’s seemingly well-received screening. Known best for directing Regina Spektor videos, Petty shot “France” on a tiny HDD camera between 2005 and 2006, and edited the film entirely on Final Cut Pro. She had met Paris through Warner Brothers Records, and the film began as a sort of “Truth of Dare” movie to help promote Hilton’s recent venture into music. “But it evolved into a kind of dialogue about perception and we just started talking more about ‘the real her,'” Petty said. “I have worked with a lot of musicians that want to be portrayed in a way that is legitimate and in a way that is true to themselves. That’s always my approach when I work with an artist or a personality.”

Petty main concern with the film’s content is actually whether she was “too nice.” “I mean it’s tough because people are gonna say that I was too nice to her,” she said. “But at the end of the day I don’t feel any need to cover that territory. Everyone else has already done that. There’s nothing fresh or innovative about hating on Paris Hilton. What new ground am I covering?” She says the film is very much “a real portrait of [her] experience” with Hilton. She speaks very highly of her, despite her supposed involvement in the film’s problematic journey to – so far – one screen.

“It was, frankly, shelved, because at the time I think she was too close to the material,” said Petty. “There were a lot of managers and people involved that just didn’t feel it was good for the brand and that it wasn’t a good fit for her. I felt that was a consideration I was willing to give her.” The turning point was when Petty had the opportunity to show Hilton a finished cut. “I think it’s just a better climate for her to take a stand and say ‘that’s who I am, I’m cool with it,'” Petty said. “It’s cool if I don’t look perfect.” How that approval led to Hilton’s – or perhaps simply her handlers’ – last minute “legal threats” is unclear. [Peter Knegt]

Valentino And His Life

Isaac Mizrahi ventured into the film portrait back in 1995 with “Unzipped” and Chanel’s Karl Lagerfeld was the subject of a documentary in Berlin two years ago with Rodolphe Marconi‘s “Lagerfeld Confidential.” The late Yves Saint Laurent even has a traveling museum show highlighting the fashion king’s work and life. Now couture maverick Valentino takes his bow in Matt Tyrnauer‘s doc “Valentino: The Last Emperor,” screening as a Special Presentation at the Toronto International Film Festival. The film focuses on the period between the Italian designer’s 70th birthday and his final show. “Valentino” also delves into the fifty-year relationship with his lover, business partner and confidante Giancarlo Giammetti.

The couple’s five dogs (all pugs) also provide some entertainment in the film and Tyrnauer said he felt like Valentino and Giancarlo’s sixth pet. “They called me the sixth pug…I ate better than I ever have in my life.” But the focus was the relationship between the two men and their partnership which trailblazed the Valentino name into the stratosphere of haute couture. “The point of the story was their relationship. I met more than a great designer, but this incredible dynamic team.” While Valentino is stepping back from fashion he told the audience that he still plans to make an appearance on the scene from time to time. “You are the first audience to hear this, but I would love to design costumes for the opera or classical ballet.” [Brian Brooks, Cameron Yates] 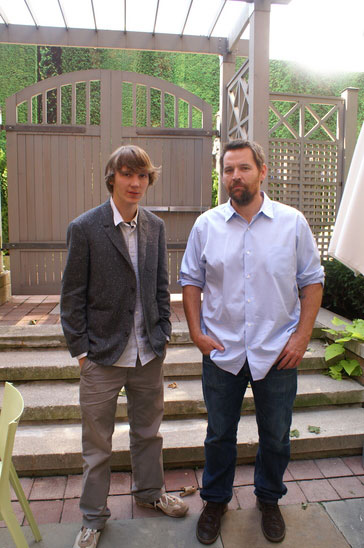 Matt Aselton on his “Gigantic” Tale

“It’s a film about the backstory of relationships,” explains director Matt Aselton of his film ‘Gigantic’ which had its world premiere on Monday night in Toronto. With an all star cast, the film follows the growing romance between mattress salesman Brian (Paul Dano) and quirky, naive rich girl Harriet/Happy (Zooey Deschanel).

Aselton explains that he and his co-writer and college friend Adam Nagata both come from a literary background and wanted to create a film that wasn’t expository, but rather something novelistic and surrealist. “Kirby (Ed Asner) [Brian’s father] is 80 and Brian is 28, how does that affect their relationship? Harriet walks around in her underwear all the time, how does that affect their relationship? Those little things that are often found in literature but rarely in film are the things we wanted to show in ‘Gigantic’.”

The film’s title is a little surrealist, too. While nothing is literally “gigantic” in the film, Aselton contemplates on it, trying to describe that it is a term often used by young children when everything seems fantastic and great. “There’s an innocence about the title…I guess it’s a juxtaposition against Brian’s life changing decision to adopt a baby.”

As a first time feature filmmaker, Aselton views the current financial state of the industry as a great equalizer. “It makes for better and more responsible filmmaking,” he says, citing the Coen Brothers as a great example of successful films made on a modest budget, combined with talent and equality amongst cast and crew. Concerning his own film, Aselton has little to worry about, having had the film picked up for distribution in both France and Italy, and negotiations already under way for North America.

indieWIRE’s Steve Ramos reviewed the film and calls it, “pretty to watch, engaging from start to finish and funny in all the right places.” [Jenny Sung]

“I think everything I have to say about the film is in the thing,” “Lymelife” director Derick Martini told the crowd at the World Premiere of his film at the Toronto International Film Festival. Screening in the Discovery section, “Lymelife” is Martini’s directorial debut, but not his TIFF debut. Director Kevin Jordan‘s “Goat on Fire and Smiling Fish,” which Martini co-wrote with his brother, Steve Martini, actually won the Discovery award back in 1999. Regarding that experience, Martini said how grateful he was for the Toronto audience. “[They] were really astute and sophisticated and I appreciated that.”

It’s likely Martini was once again appreciative when he witnessed the audience’s approval of “Lymelife,” which drew much laughter throughout, and considerable applause afterwards. The film, set in 1970s Long Island, depicts a series of intertwining relationships between the members of two families: The Bartletts (played by Alec Baldwin, Jill Hennessy, Rory and Kieran Culkin) and The Braggs (played by Timothy Hutton, Cynthia Nixon and Emma Roberts). Martini uses lyme disease, both literally and metaphorically, to display the families’ deterioration.

Martini shot the film in just 22 days, a fact that garnered a big round of applause when he announced it in the Q & A after the screening, and remains uncertain as to its future beyond Toronto. One audience member asked blatantly: “Is this film going to be released?” Martini handled the question – probably a nerve-racking one for him given recent economic climates for little films like “Lymelife” – calmly. “You know, we’ll find out pretty soon… If my agent does his job.” [Peter Knegt]

Get the latest from the Toronto International Film Festival in indieWIRE’s special section.