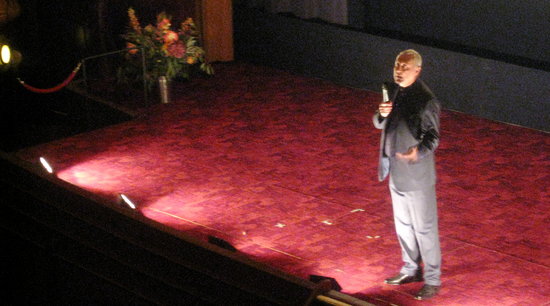 We live in a text-based society, argues director Peter Greenaway, early in his latest film, “Rembrandt’s J’Accuse,” a fascinating new documentary that was showcased this weekend at the International Documentary Film Festival Amsterdam. The fact that we are taught from an early age how to read words, but not images is, “why we have such an impoverished cinema,” Greenaway adds.

An on screen investigator in the new film, Greenaway calls Rembrandt’s “Night Watch” an accusation, building a case with thirty-one arguments detailed in the film, concluding with an interpretation of the world-famous painting from the Dutch Golden Age (on display at the Rijksmuseum here).

Two years ago, Peter Greenaway explored the creation of the painting with narrative feature, “Nightwatching.” While his latest film is a documentary, it’s not hard to imagine it also staged as a play. Thirty-four people, portrayed at times by actors in Greenaway’s film, are depicted in Rembrandt’s “Night Watch” and two are looking directly at the viewer. If, as Greenaway contends, “The only true thing the cinema ever invented was the gaze,” then armed with our filmic training we should be able to interpret the action of this scene. 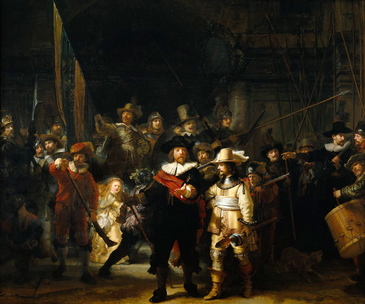 Rembrandt departed from convention in creating this commissioned militia painting, staging a scene of a complex grouping rather than offering a more straight forward line-up of figures, even placing an image of himself deep within the portrait. What was the artists saying with this work and why did his career seem to collapse after he unveiled it? These are just some of the questions probed by Greenaway in the new film.

“It is my sincere opinion that Rembrandt wanted to make a satirical painting about Amsterdam,” Greenway explained this weekend during an IDFA nightly talk show. “There were a lot of fat cats that became rich due to the city’s trade at the time,” the filmmaker explained, expressing his belief that Rembrandt wanted to mock this crowd and their money, despite being of some means himself.

Next up for Greenway will be an examination of Michelangelo’s venerated “The Last Supper.” [Eugene Hernandez, with a contribution by Brian Brooks]

Emotional, complex paternal relationships are explored in a pair of new docs that screened over the weekend here at IDFA, Rick Minnich‘s “Forgetting Dad” and Mira Burt-Wintonick and Peter Wintonick‘s “PilgrIMAGE.” 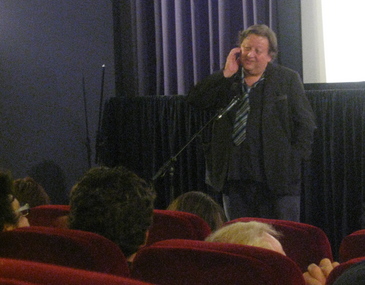 Peter Wintonick, co-director of “Pilgrimage,” at IDFA this weekend. Photo by Eugene Hernandez/indieWIRE

“If your father no longer remembers you, does he stop being your father?,” asks filmmaker Rick Minnich (“Homemade Hillbilly Jam”) in his latest doc, directed with Matt Sweetwood. Minnich’s father experiences total amnesia a week after a car accident, leading him to launch into a new life. But, questions about the accident and the amnesia persist and his son, documentary filmmaker Minnich, assembles a look at his own family.

Exploring a different father – child dynamic is “PilgrIMAGE” from the Wintonicks. A fixture here at IDFA where he produces the many daily talk shows, debates and discussions, Peter Wintonick was watching a fine cut of the film at the IDFA office when good friend (and IDFA chief) Ally Derks asked to take a look. On Saturday night, she and a group of festival staffers and friends assembled before the screening to salute Wintonick and introduce the screening.

Clearly moved by the attention, Canadian Peter Wintonick (“Manufacturing Consent: Noam Chomsky and the Media,” “Cinema Verite: Defining the Moment”) called the film, a tour of his life and travelogue of cinematic sites around the world, a sort of “cine blog.” He and his daughter reveal themselves and their creative passions in segments joined by a hand reaching into the frame to turn the page of a scrapbook.

“Most of my films are about media,” Wintonick said at the Q & A, admitting a passion for the subject. Continuing, he explained that while this would probably be the only time he tackled a personal film, this opportunity to work with his own daughter was impossible to pass up. There is a long tradition of docs about fathers and sons, Wintonick noted, but, “very few films about fathers and daughters.” [Eugene Hernandez]

Frequent festivalgoers probably take for granted the ins-and-outs of “the biz.” But, recently I heard that a filmmaker said she’d been given an inside scoop about film festivals… The big news was that Cannes, Toronto, Sundance and Berlin were the most important festivals to target. What might seem obvious to insiders, was a revelation for the young filmmakers. A reminder that it’s easy to take industry insight for granted.

The workings of festivals and eventually distribution (hopefully) is not instinct nor an exact science, so Women Make Movies head, Debra Zimmerman broke it down to basics in Amsterdam at this weekend’s panel, “The Marketplace: From MG to D.I.Y.”

Zimmerman introduced the two hour discussion with an illustration explaining the mechanics of how to tackle the life of a film once it’s in the can. Using a pyramid, Zimmerman placed the “A-list” festivals at the pinnacle (the Cannes, Toronto, Sundance, Berlin ilk) followed by theatrical distribution, semi-theatrical distribution (museums, cinematheques and B-list festivals and the such) with DVD and other forms of non-theatrical forming the base.

“The pyramid is like having your cake and eating it too,” joked Zimmerman. “It’s easier to slide down the pyramid then go back up.” Zimmerman explained to the audience, mostly made up of doc filmmakers and aspiring filmmakers, stressed that it is really difficult to turn around and get a film into an A-list festival once it has played at a B-list event. Very rare, but not impossible though. Jonathan Caouette‘s “Tarnation” premiered at MIX, an experimental gay and lesbian film festival in New York before receiving an invitation to Sundance, and it even screened again in the Big Apple at the venerable New York Film Festival nine months later.

On the subject of documentaries in particular, Participant Media‘s Diane Weyerman offered both hope and trepidation. While, Weyerman talked about the company’s spectacular success early on in its existence with Davis Guggenheim‘s “An Inconvenient Truth,” but has since seen a shift in the fortunes of non-fiction film, citing the disappointing box office returns for Errol Morris‘ “Standard Operating Procedure” (which is screening at this year’s IDFA) and even Oscar-winning doc, “Taxi to the Darkside.”

“I’m still an optimist, I think these things are cyclical, we just have to find a way for these things to work,” said Weyerman. “If you’re aiming for theatrical,it’s extremely difficult, not just for documentary, but also narratives. It’s hard but it can happen.” [Brian Brooks]

indieWIRE’s coverage of the International Documentary Film Festival Amsterdam continues throughout this week.

This Article is related to: Features and tagged Documentary, Festival Dispatch