DISPATCH FROM LOS ANGELES | Despite a Dropout and an Election, AFI Fest Runs with it

Timing hasn’t exactly been on the 2008 AFI Los Angeles International Film Festival‘s side. Besides its first half coinciding with massive buildup to today’s election, the Hollywood-centered festival also had to contend with the unfortunate last minute news that its opening night film, Joe Wright‘s “The Soloist,” was dropping out of its lineup. But the show had to go on, and AFI Fest has proven as resilient as possible since its opening night switcheroo premiere of John Patrick Shanley‘s “Doubt” last Thursday.

With Shanley and his stars Meryl Streep and Amy Adams in attendance, “Doubt”‘s premiere managed to go off without a hitch, despite its severely last-minute elements. Prints of the film hadn’t been made yet, so the film was projected digitally. Shanley admitted it was the first time seeing the full cut. Distributor Miramax‘s President Daniel Battsek admitted to the audience that “Doubt” was “still wet behind the ears.” Battsek also thanked the film’s producer recent Harvey Weinstein adversary Scott Rudin with an assumed wink-wink: “He gave us two decent pictures last year,” he said. 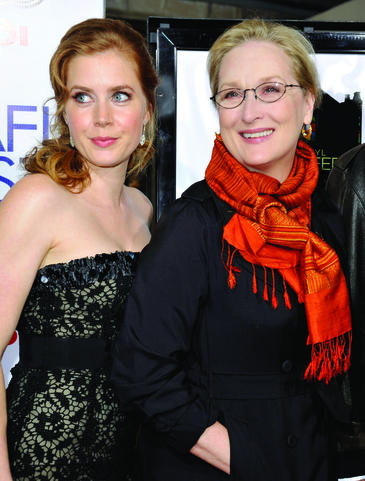 The festival continued over the weekend with warm receptions of LA premieres of both lesser known films like Kimberly Reed‘s unwavering portrait of her own family, “Prodigal Sons,” and F. Javier Gutierrez‘s haunting “Before The Fall,” as well as Cannes alums like Kelly Reichardt‘s Michelle Williams starrer “Wendy and Lucy and Arnaud Desplechin‘s soon-to-be-released “A Christmas Tale.” Meanwhile, Dana Nachman and Don Hardy‘s “Witch Hunt” found distribution just prior to its Sunday night LA premiere.

Steven Soderbergh‘s “Che” saw its West Coast debut in its full 262 minute form Saturday night as a Centerpiece Gala. While post-screening chatter seemed to definitely fall towards the positive, the night’s hottest topic seemed to come from screening attendee Joaquin Phoenix, who walked the red carpet with the words “Bye!” and “Good” written on his knuckles, in that order.

Despite these events, the festival seems to be atypically back-loaded (likely in an attempt to benefit from post-election openings in public interest), with LA premieres of “The Wrestler” and “Slumdog Millionaire,” and the closing night world premiere of Edward Zwick‘s “Defiance.” The fest will also premiere much of its competition slate, including Rafael Monserrate‘s “PoundCake,” and Duane Hopkins‘ “Better Things.” indieWIRE spoke to the filmmakers of both films.

His directorial debut, Rafael Monserrate’s “PoundCake” is the sole U.S. entry in the narrative competition. Set on the night before Thanksgiving in the late 1980s, the film is a comic look at a very dysfunctional Buffalo, New York family. It stars Jay O. Sanders, Kathleen Quinlan and the film’s screenwriters, Troy Hall and Kevin Logie.

“This film celebrates the good, the bad, the outrageousness, and the simplicity, that is family,” said Monserrate. “In the [film’s family, the] Morgans, we see ourselves. And in their story, we recognize our universal need to deeply connect with the ones we love. This is the truth of the film, and why I was inspired to tell this story. What are the ties that bind? Why do we work so hard to stay together? Why do we fight so much with those we love? Yet these are our fondest memories, our funniest stories, and our most cherished moments.”

Monserrate had been friends with Hall since attending The American Academy of Dramatic Arts in New York fourteen years ago. “We shared the same passion for movies and story telling,” he said of their initial friendship. ” We learned that what interested each of us most, was telling stories that were real. Since we shared a belief in the authenticity of story, we vowed to make movies together and ‘PoundCake’ is our first.”

It was first conceived when Hall and Kevin Logie set out to write a series of sketch comedy skits about the characters people recognize in our own families. “As they recalled the humorous and heartwarming stories of their past, they soon realized that they had much more to say about growing up in small town America,” said Monserrate.

Monserrate’s hopes for AFI are “distribution, distribution, and more distribution.” “I am very proud of this this film,” he said. “And I think it should be seen. I really believe this story, given the right opportunity, would reach an audience. Why? Because it is honest. Troy and Kevin really did write a fantastic script, and I think in translating it to the screen, we were able to strike a wonderful balance of gut wrenching hilarity and heart. It is a story we can all relate to. It is a slice of life, absurdly funny at times, politically incorrect at others, and wonderfully moving as a whole, We are grateful to the good folks at AFI for given us our first introduction to the festival circuit with our World Premiere. So far it has been a wonderful experience with the support and the encouragement of the entire AFI staff. We are the only American Film in Narrative competition and our premiere sold out in 4 days. Thanks AFI.”

“PoundCake” premieres Wednesday, November 5th at the Arclight in Hollywood.

Duane Hopkins’ “Better Things” is having its U.S. Premiere in AFI’s Narrative Competition. His first feature, “Things” details the aftermath of a young junkie’s death in rural England, An intervention on addiction and isolation, the film features a mostly unprofessional cast.

“I wanted to make a more challenging and honest interpretation of rural England,” Hopkins said. “To create images that reminded me of the atmosphere of growing up in such an isolated and indifferent place. I also wanted to make a love story that showed love to be an emotion capable of personal cruelty and violence as well as beauty and compassion… I was interested in investigating narrative. I wanted to make a film that concentrated on theme rather than linear plot or even story. A powerful narrative that is constructed from a gradual build up of scenes and sequences that relate to and compliment one another to create an overall impression of an area and its inhabitants.”

Hopkins was introduced to filmmaking “by accident.” “I was studying fine art, mainly through painting & photography and I came across an old film camera,” he said. “I used that to make a short film and fell in love with the whole process. I found that artistically my ideas could find a better realization through the moving image. It spoke to me instantly and felt natural.”

This realization was challenging when Hopkins took on “Better Things.” Hopkins considers the script’s structure as “no plot, just theme” featuring “no conventional film characters.” “They are all people who normally constitute the periphery in films, but here I put them center stage,” he said. “It is rural and yet contains urban themes such as drug use. I also make no moral judgments, my characters mourn a dead heroin addict with the same intensity as in other films would be reserved for ‘good, moral’ characters.”

Hopkins’ challenges went beyond this as well. “Physically and practically there was other things, such as my choice to shoot on 35mm Anamorphic,” he said. “A beautiful but very awkward and large format to shoot on, especially in winter and in cramped real locations. The final thing is probably the length of time the process takes. To remain creatively rigorous at every stage of the process and make sure your critical responses remain clear in the face of budget and time constraints. To stay focused on your original vision and aesthetic goal with the film while also remaining open to new possibilities.”

AFI will witness Hopkins’ vision when the film premieres at the Arclight on Thursday, November 6.