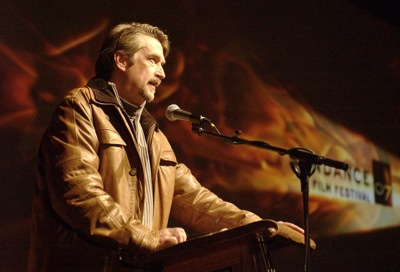 This first person article by Geoff Gilmore was first published in January, ahead of the 2009 Sundance Film Festival.

Everyone speaks today of this being a moment for change. And yet the truth is for independent film, change has been constant. As the Director of the Sundance Film Festival over (nearly) the last two decades, I’ve witnessed an ongoing and constant evolution. Indeed every passing year has seemed to proclaim the end of an era and the beginning of a ‘revolution’! And each year it seems independent filmmakers expand the realm of the possible. As viewed over an extended period of time, there certainly has been remarkable change. The numbers of films produced as compared to the mid-1990’s has quintupled – there has been a complete change in the marketplace in terms of films distributed (doubled), companies competing (tripled), and the standards for success, (A million dollar gross twenty years ago vs. ten million a decade past vs. twenty-five today). Most importantly the overall visibility and significance of independent film and its players, that generation of filmmakers that produced the Coens, and Tarantino, P.T. Anderson and Todd Haynes, Errol Morris and Michael Moore and the rest have had a distinct impact on American film culture and its industry. All of these changes are significant and real.

But after thirty years of independent film, have we reached an end? Is the independent arena creatively moribund and/or has the audience itself changed either because of a generational shift or simply a transformation in public taste? Perhaps more critically, are the changes with financial or structural models that fueled the independent arena’s growth now outdated or passe? For over three decades, video/DVD and cable were the revenue safety net for independent film and equity financing its fuel, and that may simply no longer be the case. So where are we now? I know most media and journalists seek definitive answers. All I know are the questions but I think they are instructive.

Perhaps I’ll start with what I know best, film festivals and the business of film markets. The numbers and range of film festivals globally has grown exponentially, but in terms of the business, there really are still just a handful of festivals that service the various national and international film industries. Essentially those key film festivals e.g. Cannes, Toronto, Sundance, Berlin, (and perhaps for specific arenas, Pusan, San Sebastian and Dubai), have become primarily industry events, existing as platforms for film for various and sundry purposes such as film sales, publicity, critical and jury accolades, filmmaker and talent opportunities and media exploitation etc. But when festivals are evaluated purely as markets we tend to overlook what is most crucial, the quality and inventiveness of the filmmaking and the emergence of new filmmakers, actors, writers and other creative forces.

Two years ago more films sold out of Sundance than any year since we’ve begun and then last year sales were less than half of that previous year. In most people’s mind the films last year were at least as good, interesting and successful as the year before, if not better, yet one festival was regarded by media pundits as a success, the other as a failure. Even the idea that the performance of films in the marketplace should be regarded as part of the festival’s purview suggests that the hype and buzz of festivals is of our own making. Is it? I tend to think that’s not what a festival’s primary mission is. That said, festivals have changed and the industry aspect of their existence is entrenched. If festivals are to remain relevant to what has always been their lifeblood (young people, new talent, and a new generation), their mission must continue to evolve. To this end they need to expand their accessibility and their creative focus and they need to take risks, to create the atmosphere for that aforementioned expansion of the sense of the possible. If festivals don’t continually rethink how and what to showcase for the future, even without abandoning their traditional cultural purpose and aesthetic standards, then the festival world will go the way of the dinosaur.

But what are the possibilities for change? Are festivals healthy? Well yes and no. It’s not at all clear that a new generation will embrace festival attendance and exposure in the same manner of the last generation. And as festivals have evolved, is their cultural mission dissipating in favor of more manipulated industry function? Can festivals keep their integrity and even expand their meaningfulness to a range of constituencies? As they move into the future, will cyberspace and other forms of outreach (broadcast, cable etc.) become more a part of festival events in the same way of most sporting events? Will new forms of media become a part of so-called film festivals? As always the answers will be driven by the artists but festivals have to keep their eyes and ears open to freshness and diversity. Indeed the answers to most these queries are the portrait of our future.

But what about the present state of independent film? Is the independent film arena truly struggling or are the production and distribution of independent films as difficult as they always have been and always will be? Maybe we can address this by asking several questions. First of all, there is the question of audiences – their tastes and motivations. A close second is the range the difficulties (both familiar and new) inherent in distribution. Many people say there are too many independent films produced given that the pipeline for distribution is so narrow. Even though more films are reaching the theatrical marketplace, the subsequent competition for audience and the perceived failure of many works in that theatrical arena creates an outlook that independent film is in crisis. Is it true? Again the answer is complicated.

Audiences are changing. The over thirty-audience is the target for much of the independent arena – whereas the new generation represents an interesting contradiction. There is no question that the current college audience is much more sophisticated about cinema- about art film or international and independent work- than was my generation 30 years ago. But frankly they seem to have less interest in it. Or at least they have a greater range of activities to engage in and thus are more selective and demanding about how they are going to spend their hard-earned dollars. It’s difficult to say whether the new generation will continue to harbor the passion for film that we had. Independent film has broken a lot of ground and had a lot of success in the last two decades. But what was innovative then is now familiar. Whether new audiences can be intrigued by innovative independent work, coaxed by critics, and motivated by marketing, whether they will be interested by new subjects and artistic invention, remains to be seen.

Structurally the biggest issue facing independent film is the theatrical distribution bottleneck. As long as theatrical exposure is the driving force to a film’s revenue streams in the so called ancillary markets, video/DVD, pay cable etc. then the expense of that theatrical release, the crowded marketplace and the competition with studio and specialized divisions of studios for that same filmgoer, creates a unique challenge. And if specialized distribution and the potential of new technologies, i.e. the Internet, are the answer, the question still remains how to reach filmgoers – how does marketing on the Internet succeed whether it’s viral, social community or niche, and when will revenue streams from new distribution mechanisms actually be significant?

Theatrical admissions have trended downwards for a number of years and the importance of consumer preference and choice, of filmgoers seeing films when and how they want, is essential to success for the film industry in the future. The “long tail” of availability, the keeping of films in the market for longer periods of time is especially important for independent film. And that a film’s release is ordered by an antiquated theatrical universe is one of the fundamental obstacles facing the independent arena. Indeed why are films “seasonal” instead of “evergreen?” The practice of dating films, i.e. assigning a year of release, strikes me as a holdover from the marketing past. How and where films will be made available depends on the establishment of new outlets and new strategies. It simply makes no sense that most of the year’s quality films are all released against each other in a cutthroat fall campaign. In the future perhaps festival platforms could further serve to give films long-term visibility. At the very least new web venues, transformed marketing strategies and dynamic new concepts for consumption are at the core of making films available.

Finally, the question as to independent film’s health rests with the real driver of success – the films themselves. Each year, the Sundance Film Festival presents a spectrum of new independent film, features and documentaries, mainstream and edgy, international and domestic. I can’t emphasize enough how sure I am that the overall aesthetic value of independent film has over the years continued to evolve, develop and mature. Some of the best filmmakers in the world got their start at Sundance, and many of the world’s new filmmakers have been affected and influenced by a generation of work that is ambitious, innovative and embodies the personal qualities of storytelling that is independent film. Each year independent filmmaking is rich with the promise of discovery – a new festival’s program, new filmmakers and stories. And that itself is a real cause for optimism and hope.

Geoff Gilmore is the Director of the Sundance Film Festival.