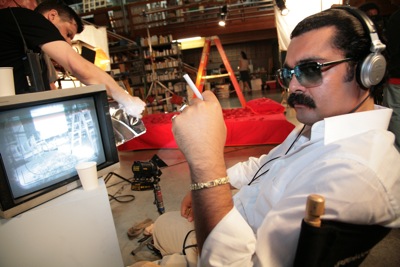 “The Auteur” is the story of renowned porn director Arturo Domingo (Melik Malkasian), the creative genius behind classics like “Five Easy Nieces” and “Requiem for a Wet Dream,” who has arrived in Portland, Oregon to receive a Lifetime Achievement award at a film festival. Arturo is delighted at the prospect of reviving his sagging career, yet troubled that fate would lead him to the hometown of his only true love, Fiona (Katherine Flynn). Encountering crazed fans, former collaborators, bitter enemies, and free-loving hippies, we follow Arturo as he frantically attempts to raise money for the film that could put him back on top: “Gang Bangs of New York.”

Westby’s last film was “Film Geek.” “The Auteur” premiered at the 2008 Tribeca Film Festival and went on to screen at Raindance and Outfest.

iW: What initially attracted you to filmmaking, and how has that interest evolved during your career?

James Westby: My interest in filmmaking was piqued by watching The Making of Michael Jackson’s Thriller, over and over on VHS when I was a boy. It was the first thing that demystified the process. Also I wanted to be Nicolas Cage in “Valley Girl,” which probably led to seeing “Raising Arizona” and learning about the Coens. That eventually paved the way to Kubrick, Scorsese, Billy Wilder, and Woody Allen, who opened the floodgates to the great European directors. Now I love the French New Wave more than anything. And I still want to be Nicolas Cage in “Valley Girl.”

iW: Are there other aspects of filmmaking (either on the creative side or industry side etc.) that you would still like to explore?

James Westby: Not really. My intention is to remain a screenwriter, director, and editor. I have been making feature films for over 16 years and I will be quite content doing those three things for the rest of my life. I am, though, starting to write more songs for the movies and that is sure a lot of fun.

iW: Please discuss how the idea for “The Auteur” came about.

James Westby: This movie, like all my other features, started with the actor Melik Malkasian, who is a chameleon on the level of Peter Sellers. He’s also my best friend, and I wrote a 5-minute film for him which we made in 2002 also called “The Auteur.” It consisted simply of a Mediterranean porn director (Arturo Domingo) recording a commentary track for his latest DVD release, “Requiem for a Wet Dream.” Those kinds of stupid puns, plus a full-bodied performance with a perfect Italian accent, seemed good enough for a feature-length film featuring the same character. From there it was a matter of coming up with even more stupid puns, as well as romanticizing my adopted hometown of Portland, Oregon to the hilt.

iW: Please elaborate a bit on your approach to making the film, including your influences (if any), as well as your overall goals for the project?

James Westby: The most important thing was to make a comedy that would actually be funny. The Auteur was crafted in such a way that it looks and feels like an elegant Hollywood romantic comedy– until someone pulls their pants down, or exposes their breasts, or gets a shot of semen in their face. The production was complicated for such a small film, as Melik had to put on 40 pounds to play the part; we then shut down for four months while he took the weight off, then filmed flashback scenes of his character on his ill-fated Vietnam film set as well as his days at USC film school.

iW: What were some of the biggest challenges you faced in either developing the project or making and securing distribution?

James Westby: The movie was made independently in Portland, and as it was being edited, it became apparent to us that this was clearly not multiplex material. Way too much T ‘n’ A and naked penises. And the movie ends with a huge circle jerk. Getting into Tribeca certainly raised the profile for the movie, and the most-asked question at our Q&As was “how are you going to distribute this film?” based on its content. But we honestly had the attitude that this was a movie that just was what it was. My producers and I are most excited about the on-demand possibilities for it, having had a very successful run theatrically here in Portland (which still continues). It’s very nice to be able to send a link to iTunes or Amazon to anyone who wants to see it. There is an IFC TV featurette on the movie that for some reason has almost 10 million views, which has helped a lot. I think people love their fake porn.

iW: How did the financing and/or casting for the film come together?

James Westby: “The Auteur” was financed by the film’s producer, Byrd McDonald, who also edited it with me, and by Amber Geiger, who is the other producer. The leading parts were written for Melik and John Breen (as porn star Frank E. Normo) and Katherine Flynn. Casting for the naked people was mostly strippers here in Portland, including the inimitable Viva Las Vegas. Amber brought Ron Jeremy to the set on the first day of shooting, having found out that he was in town signing autographs at a local swinger’s club. I wrote a part for him, and he gave us the recipe for fake semen.

iW: What other genres or stories would like to explore as a filmmaker?

James Westby: I want to make a Western for sure and also one of those cute coming-of-age movies set in the 1980s.

iW: What is your next project?

James Westby: I am making an ultra low-budget black comedy called Rid of Me about a very sad woman who really hates her husband’s friends. Also an all-lesbian comedy entitled “Dykes: The Complete Second Season,” and an adaptation of the Charles Willeford novel “The Burnt Orange Heresy.”

iW: What is your definition of “independent film,” and has that changed at all since you first started working?

James Westby: I started making films when “Slacker” and “The Living End” played in theaters, which is pretty unheard of now. Those were definitely independent. Anymore, though, I kind of get bored with the definition of that word; it’s more implicit in the movies themselves. “Stranger than Paradise,” “Chuck and Buck,” “Buffalo 66,” “Gummo,” “Swingers.” Those are really good American independent films.

iW: What general advice would you impart to emerging filmmakers?

James Westby: Do it yourself. Don’t wait around. Learn how to edit. Have a good script and get good actors and pick a start date. Watch Godard’s movies. Read everything, including Ted Hope’s blog, and Lance Weiler’s workbookproject.org. Especially go to Ray Carney’s site, cassavetes.com. His “mailbag” section is the single best thing on the Internet.

iW: Please share an achievement from your career so far that you are most proud of.

James Westby: The aforementioned “Full Metal Jackoff” sequence in The Auteur is my proudest moment. It’s six guys in North Vietnam, looking for women. They don’t find any… so they find each other. The scene has made people worldwide laugh and squirm and gag. Semen is very funny, as it turns out. I really like that I’ve been able to say “semen” so much in this interview. Thank you, indieWIRE.