Relating quote from a recent New York Times article in which a filmmaker quipped that a “dirty little secret” was that documentaries are “boring,” International Documentary Association president Eddie Schmidt launched a broadside counter-attack Wednesday night at an event hosted at the Association of Motion Pictures Arts and Sciences building in Beverly Hills.

“Documentaries, boring? I think not. Underfunded? Sure!” Schmidt proclaimed to a collective cheer from the crowd. The annual event at the AMPAS theater in Beverly Hills honored this year’s crop of feature length doc Oscar nominees including “The Betrayal (Nerakhoon)” by Ellen Kuras and Thavisouk Phrasavath, “Encounters at the End of the World” by Werner Herzog, “The Garden” by Scott Hamilton Kennedy, “Man on Wire” by James Marsh and “Trouble the Water” by Tia Lessin and Carl Deal. The celebration also saluted the four best short doc nominees: “The Conscious of Nhem En by Steven Okazaki, “The Final Inch” by Irene Taylor Brodsky, “Smile Pinki” by Megan Mylan and “The Witness – From the Balcony of Room 306” by Adam Pertofsky.

“The IDA is proud to honor such great ‘not boring films’ – and the thing is… the dirty little secret about documentaries is that, they’re ‘not boring’ [compared] to 90% of the narratives out there,” continued Schmidt to laughter.

“When [IDA executive director] Michael Lumpkin asked if I’d like to host tonight, my first reaction was, ‘how much…?’ How much do I love documentaries,” the night’s host Lily Tomlin said to howls of laughter. “I think of documentary filmmakers as evolutions of the truth [and] there is beauty in the truth,” she continued.

During the program, short clips from each nominated film screened, followed by an introduction and comments from directors and producers. Noticeably absent was “Encounters” director Werner Herzog, who was apparently casting and location scouting, according to a rep. He’ll be on hand for Oscar night.

While the other feature nominees had reps shepherding them to meet the media last night, “Garden” director Scott Hamilton Kennedy wandered into a press area solo, before posing for pictures and glad-handing. On stage later, he praised his fellow nominees and vowed to support them and their work in the future. 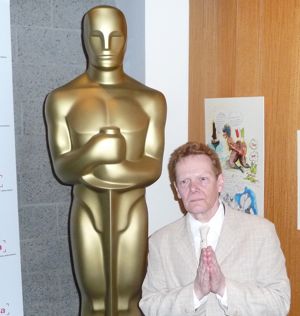 Tia Lessin and Carl Deal from “Trouble the Water,” sorry that subject Kim Rivers couldn’t be in town for the event, noted that she is in New Orleans to serve as a muse of tragedy in a Mardi Gras parade this week. She’ll be here for Oscar night. They praised their subject for embodying the “hope” of this moment in time, and reiterated their gratitude to the many non-traditional institutions and outlets that have embraced helping them get their film into the world outside of the traditional art house.

“Thanks to the Academy and the IDA. Some of the best parts [of this experience] is meeting other nominees – it’s a real community of filmmakers,” said “Man on Wire” director James Marsh on stage Wednesday. “Watching that [“Man on Wire”] clip again – I can’t watch it. I’m afraid of heights,” he continued to more laughs. The film’s subject, Philippe Petit continued the collective chuckles, commenting, “All I had to say, I said on the wire,” the daredevil/artist commented about his feat walking across a cable suspened from the top of the Twin Towers at New York’s World Trade Center back in the early ’70s.

“Little did I know when I started working on this subject 23 years ago, it would take 23 years,” noted “The Betrayal” director Ellen Kuras at AMPAS about her film which captures the story of a family forced to leave their native Laos following the chaos of the secret air war waged by the U.S. during the Vietnam War.

“You know, when you see work like [these films], it’s amazing when you then see the media reduce human existence down to soundbites,” said Tomlin.

This Article is related to: News and tagged Documentary