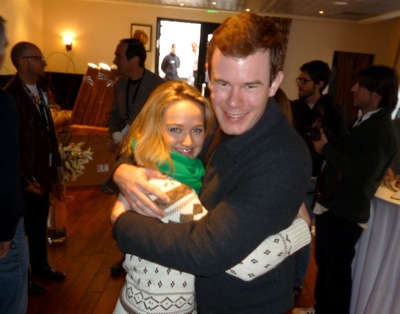 “How does a marriage function along with other creative art, like filmmaking?” director Joe Swanberg pondered, during a telephone conversation with indieWIRE yesterday. In discussing his new film, “Alexander The Last,” Swanberg wondered about navigating potentially treacherous waters. “When you are put yourself in very intimate situations with other people, that [in itself] becomes the work,” he said.

If you know Joe Swanberg’s previous work, his new film begs you to question him about his marriage, or at least challenges you to consider its impact on his movies. And vice versa.

In “Alexander the Last,” which screened for press yesterday morning in New York City, Swanberg explores, in the words of a description, a young marriage between two creative people and “the challenges of monogamy amidst a myriad sexual and creative temptations.”

The story of two sisters, with a cast that includes Jess Weixler, Barlow Jacobs, Justin Rice, Amy Seimetz, Josh Hamilton and Jane Adams, “Alexander” looks at the complicated relationships that emerge during the production of a sexy new play. “Alexander The Last” will debut next month at the SXSW Film Festival and simultaneously via IFC’s on demand cable TV platform.

The trailer for Joe Swanberg’s “Alexander The Last” is available below. The film’s one sheet and a photo gallery is at Cinematical.

“I worked more collaboratively this time than I have in the past,” Swanberg noted. The film was produced by Anish Savhani and filmmaker Noah Baumbach, who served as a key off-set creative consultant to Swanberg. Baumbach had seen “Hannah Takes the Stairs” and got involved with trying to help Swanberg get another project off the ground when “Alexander” emerged.

Working with Baumbach made him more confident as a director, Swanberg explained, especially in working with a professional group of actors. “[He was] encouraging me to get things out of them that wouldn’t necessarily occur to me… Shooting multiple takes [and] being more decisive about the things that I wanted, and more confident, Swanberg explained. “Going in, I wasn’t as forceful and brave a director as I am now.”

In “Alexander The Last,” Swanberg is exploring the complications of emotional intimacy with creative collaborators. The sexually driven play being created at the heart of his new movie would seem to parallel some of the similarly explicit films he’s made in the past. But, the new film is not just about him, he maintained, it also reflects the experiences of his collaborators.

In a society that finds itself grappling with issues of personal privacy and intimacy reflected probably most clearly with the emergence of popular social websites like Facebook and MySpace, Swanberg said he felt the need to tackle such topics. “People’s everyday stories and status updates have become drama…” he explained. After the conversation, I went back to him and asked him to elaborate a bit on this point. He responded by email:

“Our lives are becoming more public, and we are turning ourselves into ‘characters’ in an interesting way. Status updates have become sentences in a book we are all publishing about ourselves. The more intimate and personal we all get on a mass level, the more intimate and personal I feel my work should get if I want it to be an accurate depiction of the times we live in. I think my films are competing more directly with Facebook than with Hollywood.”

“When I made my first few films, YouTube and Facebook didn’t exist, or at least were not the cultural forces that that they are now. Those early films attempted to provide an intimate look at young people that I wasn’t seeing in the media. Because of YouTube and Facebook, we now have an overabundance of intimate representation of young people. It’s fantastic, but it means my work needs to change if I want to provide something that doesn’t exist.”

Looking at his own life and relationships, Swanberg revealed that ultimately, his new film is, as he describes it, is “about something that I had to resolve for myself and wanted to discuss.”

“Nights and Weekends’ is what it looks like when I am resolving something while making it,” Swanberg added, “‘Alexander The Last’ is when I’ve reached my conclusions about certain things.”