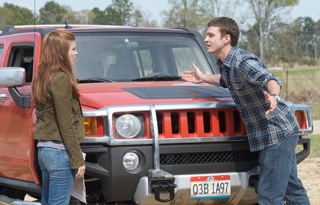 In the February edition of indieWIRE’s production column, Jason Guerrasio profiles five new films in various stages of production. This month’s group includes Agustín “Oso” Tapia’s “The Birthday,” Michael Meredith’s “The Open Road,” Anthony Burns’ “Skateland,” Matt Dallmann’s “The Third Testament” and Mahmoud al Massad’s “This is my Picture when I was Dead.”

Mexican writer-director Agustín “Oso” Tapia is currently in preproduction on a thriller that follows a 7-year-old girl who while spending a birthday weekend with her parents at their house in the country begins to witness supernatural occurrences. Shooting will take place in Northern Mexico and Mexico City this fall.

A fan of classic thriller TV series’ like “Alfred Hitchcock Presents” and “The Twilight Zone,” Tapia wrote the script three years ago in homage to that style. “I love these kinds of stories because they unveil the subconscious and irrational behavior of human beings,” he writes via e-mail from Mexico City.

No stranger to the thriller/sci-fi genre, as he was a writer on the popular late ’80s sci-fi Mexican series, “La Hora Marcada” (which had Mexican talents like Alfonso Cuarón and Guillermo del Toro direct episodes), Tapia says the characters in this film have traits that have fascinated him since he was a teen when he would go to the movies four times a week and be hypnotized by the colorful characters on the screen. “I want to prove myself in this genre,” he says. “I want to create something that communicates tenderness, sympathy and confidence to the audience.”

Outside of looking for financing through co-productions in North America, the film is also getting help from Mexican tax deductions, soft money provided by the government and the film scene in Mexico, which continues to grow stronger according to “The Brithday” producer Pedro Araneda. “The tax exemption law and the ease for producers to get money from the government is strengthening an industry that in the 1950s was one of the most important in the world,” he says.

Set for a six-week shoot, the film will be shot on 35mm by D.P. Javier Morón (he shot Tapia’s previous film “Club eutanasia”) and produced by Araneda’s Araneda Films.

Writer-director Michael Meredith (“Three Days of Rain”) highlights his love for the road in his upcoming film starring Jeff Bridges as a retired baseball player who is tracked down by his son, played by Justin Timberlake, to return home with him after a family illness.

Meredith’s first draft of the script was an ambitious one – an attempt to make a contemporary version of “Don Quixote.” But he says when his inner circle gave him negative feedback he decided to rewrite it, turning to what he knew best: his native Texas, the state’s addiction with baseball and his fixation with traveling on the road. “I moved around a lot as a kid and my dad said that was my version of a Rhode Scholarship,” Meredith says. “I think it’s in the blood.”

He says his affection with the road is a big reason why he and director Win Wenders get along so well (Meredith wrote Wenders’s “Land of Plenty” and Wenders executive produced “Three Days of Rain” and this film), and along with being a mentor to Meredith, Wenders helped to get Bridges to come onboard. “I really wanted him but it was difficult,” Meredith says. “I tried to go the proper route and it really didn’t work so Win wrote Jeff a letter and I managed to get hold of an e-mail of an assistant who had worked with Jeff and forwarded the letter with the script to the assistant, she passed it on to Jeff and he got back to me and said he wanted to do it.” The rest of the cast came together through Bridges (Mary Steenburgen and Timberlake – who shares representation with Bridges) or Meredith (Lyle Lovett and Harry Dean Stanton).

Shot in Louisiana, Texas, Tennessee, Kentucky and Ohio in 27 days, Meredith says the challenge of shooting scenes in moving cars was somewhat averted as he had learned from the experience of doing it on “Three Days of Rain.” “It’s difficult to shoot in moving cars, and that’s why you often see them done in convertibles, but when I was writing this I consciously set some of the big scenes while they were parked. I learned by lesson.”

The film is finishing post and being sold domestically by ICM. D.P. Yaron Orbach (“The Ten”) shot on 35mm and the editors are Jacob Craycroft (”A Prairie Home Companion”) and Suzy Elmiger (“House of D”). Film is produced by Meredith and Jordan Foley’s Maximon Pictures, Perfect Weekend’s Charlie Mason and Justin Moore-Lewy, as well as Laurie Foxx and David Schiff. Executive producers are Wenders and Odd Lot Entertainment’s Gigi Pritzker and Deborah Del Prete.

In his debut film, Anthony Burns co-writes a coming-of-age story with star Heath Freeman and executive producer Brandon Freeman about life in East Texas during the turbulent early ’80s.

A native of Texas, Burns was trying to make it in Hollywood when he and Heath, who’ve known each other since high school, came up with an idea to write a comedy about a “Napoleon Dynamite”-type character who tries to make it into the Olympics. Heath’s brother, Brandon, was looking to get into producing when they approached him to come on. He liked it, but when Burns and Heath began researching they found a more realistic story to tell. “We went to East Texas and everything changed,” Burns recalls. “Talking to our friends and hearing these amazing stories about going to skating rinks and listening to early ’80s music we decided we wanted to tell something more dramatic and real. It became a piece that everything in it we went through or someone we care about went through.”

In the film, 19-year-old Ritchie (Shiloh Fernandez, “Red”) is on the verge of having his life change when the skate park he works at closes down and with it his carefree life of hanging with his friends. With responsibilities suddenly thrust upon him, he spends the rest of the summer transitioning into an adult. “Where he worked at represents a dying age,” Burns explains. “Skateboarding is becoming popular, East Texas is big in exporting energy and industrial chemicals, so there’s a sense of self realization and upward mobility and Ritchie has to grow up.”

With Shreveport, Louisiana doubling for East Texas, Burns says he was blessed with the lack of productions going on around Hollywood during the holidays to get top level crew signed onto the film. “Our D.P. was the second unit d.p. on Terrence Malick’s ‘The Tree of Life,’ we also had crew members who were on ‘There Will Be Blood,’ and ‘Master and Commander’ so we got so lucky,” he says.

The 31 day shoot wrapped in December. Shot on Super 35mm by D.P. Peter Simonite, they are currently looking to hire an editor. Producers are Heath Freeman, Justin Gilley, Nicholas Jayanty and Victor Moyers.

In Matt Dallmann’s debut film, he uses a faux-doc style to look at Catholicism and the myth of a third testament.

After years of trying to get his scripts made, Dallmann and his wife Amy Weins decided to make their own film and having researched different religions for a previous script that never got off the ground, he was fascinated to explore the influence religion has on the world, specifically the bible. “I read lots of books in researching for the script,” Dallmann says, “and there’s a quote that really jumped out for me, and I use it in the beginning of the film. Abraham Lincoln was at a rally in an African-American neighborhood and some people handed him a bible and his response was, ‘This is a great book, how would we know how to live if it wasn’t for this book?’ I take this idea and run with it.” 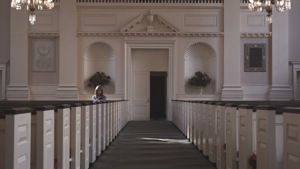 A scene from Matt Dallmann’s “The Third Testament.” Photo courtesy of Puffin Films.

In the film, we follow the wife of a missing archeologist who’s filming a documentary that picks up the trail of her husband’s findings about the true meaning behind the third testament – that a secret society of people in top positions in the government and the Vatican created it for the purpose of using it to better their own means. She soon realizes that her film has put her in great danger.

Currently shooting around New York City and parts of New Jersey for 12 days, Dallmann says the documentary style lends a freedom and ease for a first time filmmaker. “There’s no huge action shots to worry about,” he says, “but you can still make it interesting with fast cut away shots, and we’re doing stuff with the lighting to make it look more suspenseful.”

Dallmann, who will also be the editor, hopes to have a cut of the film ready for festivals by the end of May. Shooting on the Red One by D.P. Aram (Spike) Bauman, the film is produced by Weins, who is also the star of the film.

“This is my Picture when I was Dead”

When Bashir Meraish was four-years-old two men in motorcycles rode next to the car he and his father, a top PLO lieutenant, were in and shot into it 13 times presumably killing them both. 25 years later director Mahmoud al Massad (“Recycle”) examines Meraish’s miraculous life that was thought to have ended on the night of the assassination and the dream that did die.

al Massad met Meraish six months ago in Amman, Jordan where he’s a prominent political cartoonist, and though this wasn’t a story that initially interested him, over a week’s time al Massad realized how fascinating Meraish’s story could be told through the medium of film. “I realized this could be told in a very creative way,” al Massad writes via e-mail from Holland, where he’s currently in production of the doc. “To examine the perspective of Meraish as if he really had been dead all this time. His story had elements that were truly stranger than fiction.”

There was also an interesting sub plot. “Over the last couple of years the dream his father died for – an independent and strong Palestinian nation – is turning to dust,” al Massad continues. “Bashir is a political cartoonist, ten of his friends from one childhood picture have died, his father was assassinated, his story in every sense is entangled with destruction of this dream.”

For the film, al Massad says he’s creating an unconventional style of storytelling. “I was encouraged by Errol Morris’s ‘Standard Operating Procedure’ in the sense that I felt I shouldn’t limit myself in creating something just because it’s a documentary,” he says. “We are developing a unique style with a team of visual artists that’s a mixture of animation, composition, photography and 3D graphics to visualize the essential scenes from Bashir’s past.”

Shooting in Jordan, Greece and France, al Massad hopes to be finished with the film by the fall. Having already received a grant from the Sundance Institute, a work-in-process prize at December’s Dubai Film Festival and support from the Jordan Royal Film Commission, al Massad says he couldn’t ask for any greater worldwide audience builder for the project.

Produced by al Massad and Sabine Groenewegen, the film is being shot on the Red One. D.P. and editor have not been confirmed yet.

This Article is related to: Features and tagged In The Works