At SXSW, Considering Word of Mouth in an Emerging On Demand World

The strained film distribution system is often a topic of discussion at film festivals. New and established filmmakers gather to hear the latest from industry insiders who’ve said it all before. But this year at SXSW, a few things feel a bit different. For one, as has been well documented, a handful of films are bypassing theatrical distribution in favor of simultaneous festival and digital premieres (via VOD or online). And amidst all the layoffs and company closures, optimistic eyes remain on Bob Berney who seems closer to launching a new film distribution company.

Now more than ever there is a unique tension between two distinct approaches to film distribution. Most distributors, from Sony Pictures Classics and Fox Searchlight to Zeitgeist, Miramax and many others, remain committed to the traditional roll-out of a movie with word of mouth that builds over time. Yet, others — namely IFC Films and Magnolia Pictures — have embraced more immediate releases that hope to generate instant blog buzz and national attention driven in large part by the Internet.

Saturday’s distribution discussion at the bustling SXSW Film Conference that runs alongside the SXSW Film Festival featured Barker, Magnolia’s Eamonn Bowles, IFC’s Ryan Werner, Oscilloscope’s David Fenkel, Blockbuster’s Keith Leopard, and was moderated by film rep David Garber. Filmmakers were offered a lot of facts and figures and encouraged to do their homework to find the approach that could work best for them.

Sony’s Barker bristles when his company’s approach is called “traditional” because SPC is also pursuing multiple platforms for their films, but not with the collapsed window approach of competitors IFC and Magnolia. “We use traditional windows because that is the way that we get the most revenue possible,” Barker noted on Saturday. The slow build approach, he emphasized was the only way to maximize attention, acclaim and audiences — and ultimately revenue — for recent Sony Classics films like “Frozen River” and “The Lives of Others.” Oscar winner and box office success “Slumdog Millionaire” was also hit by following that more conventional model. Without such a traditional approach, panelists agreed, it’s quite unlikely the film could have earned its $132 million, so far.

That said, Eamonn Bowles from Magnolia and Ryan Werner from IFC Films, who both come from a more traditional theatrical film distribution background, touted the way that each of their companies is tweaking release patterns to generate revenue. Magnolia put James Gray’s “Two Lovers” on VOD ahead of its theatrical debut and the film has already earned nearly $1.2 million in a month, while IFC has collapsed windows for all of its releases, earning more than $600,000 in theaters for Cannes winner, “Gomorrah” and making $1.1 million theatrically for “Che.” And Blockbuster’s Leopard confirmed that VOD is not hurting DVD revenues at all. 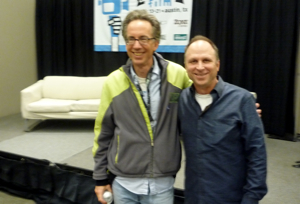 The new distribution models require distributors to stoke more immediate word of mouth for increasingly higher profile films, many from the festival circuit. Traditional media and film critics are following the lead of companies like Magnolia and IFC, joining bloggers in buzzing about unconventional release strategies. Notably yesterday, The New York Times published a full-length Manohla Dargis film review pegged to yesterday’s festival and on demand premiere of Joe Swanberg’s “Alexander The Last.”

Later in the day, former Picturehouse president Bob Berney also touted the slow-and-go approach, citing Fox Searchlight’s success with “Slumdog” and “The Wrestler.” “I think word of mouth is the key to profitability,” Berney said, advocating the approach upon which he’s built his career with the success of films such as “My Big Fat Greek Wedding,” “Whale Rider,” and “Monster.”

“It’s harder to create word of mouth in a VOD world,” Berney told moderator John Pierson during a one-on-one Q & A. That said, Berney doesn’t seem to be ruling out anything for an anticipated new company he is building that has yet to be announced.

Details of Berney’s funding and business plan have been a constant source of speculation among competitors, filmmakers and observers. Every few weeks he’s rumored to be working on any number of new films with an unconfirmed roster of backers. Some said he’d use the SXSW platform to detail his plans, but he again kept details relatively vague.

“I definitely feel like my heart is in independent distribution,” Berney said, when asked to talk a bit about his intentions. In other conversations he’s said his new company would distribute on multiple platforms and on Saturday he only added that the company will be “very different than Picturehouse.” And concluding the thought, Berney said, “Hopefully in a few months we will be back.”

Saturday night inside a crowded Paramount Theater, it was hard to overlook the significance of the moment as Joe Swanberg walked on stage to present the premiere of “Alexander The Last.”

“Thanks everyone for coming to see a movie in a real movie theater on a movie screen,” Swanberg told the enthusiastic crowd, quipping, “Maybe if this plan works, in a few years you’ll just stay home and watch it on your TV.”

“But, at the very least,” Swanberg continued, “As of tonight you have that option.”