The United States’ oldest running film fest, the San Francisco International Film Festival unveiled 13 titles participating in its Documentary Competition during its 52nd edition. The event will award over $100,000 in total prizes this year. $60,000 will be awarded to winners in three categories: investigative documentary feature ($25,000), documentary feature ($20,000) and Bay Area documentary feature ($15,000). The jury’s selection of winners will be announced at the Golden Gate Awards on Wednesday, May 6. Among the film’s taking part in the doc competition are N.C. Heikin’s “Kimjongilia,” Joe Berlinger’s “Crude” and Franny Armstrong’s “The Age of Stupid.”

In addition to doc prizes, $15,000 will be awarded to SFIFF’s New Directors Competition winner, with 11 features from around the world screening in the section, including Bosnia and Herzegovina best foreign-language Oscar entry, “Snow” by Aida Begic, the North American debuts of “Can Go Through Skin” by Esther Rots and “Claustrophobia” by Ivy Ho. The annual SFIFF is produced by the San Francisco Film Society.

The 52nd San Francisco International Film Festival doc and new director competition line up desciptions are provided by the festival.

“The Age of Stupid,” directed by Franny Armstrong, England 2008
An archivist (Pete Postlethwaite) on the dying planet Earth circa 2055 looks back at our species’ current reluctance to address climate change in this cautionary, apocalyptic tale that blends verite storytelling, cutting-edge graphics and gallows humor.

“Crude,” directed by Joe Berlinger, USA/Ecuador 2008
This lively and gripping documentary directed by Joe Berlinger follows the shifting course of a lawsuit that pits 30,000 Ecuadoreans against Chevron over the contamination of a large region in the Amazon jungle of Ecuador.
D tour directed by Jim Granato, USA 2009
Pat Spurgeon, charismatic drummer for local indie rockers Rogue Wave, needs to keep playing music–and a new kidney. This remarkable travelogue follows his double quest during an eventful US tour, mixing interviews with performances by Rogue Wave and Ben Gibbard, among others.

“Kimjongilia,” directed by N.C. Heikin, USA/South Korea 2009
Through a series of extraordinary interviews with North Korean refugees, N.C. Heikin’s stylistically inventive documentary presents a devastating indictment of Kim Jong Il, one of the world’s most controversial and elusive dictators.

“My Neighbor, My Killer,” directed by Anne Aghion, USA 2009
A documentary about the justice process currently taking place in Rwanda where those who committed genocide have been returned to their community but are asked to confess to their crimes.

“Nomad’s Land,” directed by Gael Metroz, Switzerland 2008
Gael Metroz, inspired by the writings of the famous Swiss adventurer/philosopher Nicolas Bouvier, discovers a deep connection to nomadic peoples and the physical and spiritual beauty of their worlds. A travel film unlike any you’ve seen.

“The Reckoning,” directed by Pamela Yates, USA 2009
The International Criminal Court’s attempts to prosecute instigators of mass genocide who acted with impunity is examined through accounts of victims, prosecutors and human rights activists in this fascinating, often encouraging, account of the pursuit of justice.

“Z32,” directed by Avi Mograbi, Israel 2008, North American Premiere
Israeli “docu-essayist” Avi Mograbi reveals the deepest longings of a nation in conflict in this genre-breaking and original work in which a young Israeli soldier examines his participation in a revenge operation and anonymously speaks of his experiences to his girlfriend. 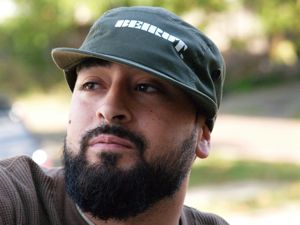 “Autumn,” directed by Oezcan Alper, Turkey 2008
In this first full-length feature in the Hemsin language of northeast Turkey, Yusuf struggles to find purpose after serving ten years as a political prisoner.

“Can Go Through Skin,” directed by Esther Rots, Netherlands 2008, North American Premiere
A woman reeling from an act of violence hopes to shake it off by buying and moving into a remote cottage. Embarking on a new relationship, she finds that the past has its way of informing the present.

“Don’t Let Me Drown,” directed by Cruz Angeles, USA 2008
New York’s vibrant Mexican and Dominican communities take center stage in this lyrical look at the love between a young Mexican boy and a Dominican girl, set in the immediate aftermath of 9/11.

“French Girl,” directed by Souad El-Bouhati, France/Morocco 2008
Exploring issues of identity, origin and family with a deft touch, French Girl details the life of Sofia, who spends a happy childhood in France, is relocated to Morocco by her family and longs to return to the country where she grew up.

“Gasoline,” directed by Julio Hernandez Cordon, Guatemala 2008
Three middle-class teenage boys, stealing gasoline to go on an all-night joyride, are headed on the highway to hell in this provocative, nuanced story of adolescent angst.

“Home,” directed by Ursula Meier, Switzerland 2008
Intriguingly stylized, Home explores the gradual deterioration of a family’s peaceful existence when the long-unused stretch of highway that borders their house suddenly opens for public use.

“Kabuli Kid,” directed by Barmak Akram, France/Afghanistan 2008
In Kabul, a young mother leaves her infant child in the back seat of a taxicab and it is up to the driver to try and track her down in this lovingly observed neorealist-style film.

“Mid-August Lunch,” directed by Gianni di Gregorio, Italy 2008, U.S. Premiere
On the Pranzo di Ferragosto (Feast of the Assumption), money troubles compel Gianni, a middle-aged Roman living with his elegant, elderly mother, to take in three other nonnas (grandmothers). Their wiliness and lively warmth keep Gianni on his toes and friendship unexpectedly blossoms.

“The Paranoids,” directed by Gabriel Medina, Argentina 2008, U.S. Premiere
In this hilarious comedy of errors from Argentina, an unaccomplished screenwriter who works children’s birthday parties for a living tries not to sleep with his best friend’s girlfriend, but fails at that too.

“Snow,” directed by Aida Begic, Bosnia and Herzegovina 2008
A remote mountain top village of strong-willed widows and orphans provides the atmospheric setting of this Bosnian magical film, which investigates the memories of war and the everyday pleasures of life.