In Romance languages, the word for “foreign” is a relative of the English term for “strange”: extranjero, etranger, straniero.

Foreign-language features, with looser scripts, less conventional form, and more penetrating character development, are more often than not “strange” by the standards of both Hollywood and American indie films. And the strongest documentaries, be they from here or abroad, offer the viewer effective critical distance from the subject matter–what academics call etrangement.

Here are Tribeca’s 10 best from these two categories, arranged alphabetically. One Tribeca topper told the Times last week that this year’s selection is “deliberately light” on account of the economic crisis. Now that IS “strange”–and inaccurate. The directors of the films below refuse to whitewash. Their work is, like much of life itself, dark, refreshingly dark.

About Elly A group of relatives and pals rents a seaside villa in this beautifully choreographed Iranian film by Asghar Farhadi. At first the camera trails the excited characters as they move around the house and one another. Suddenly, it is thought that a child and a guest may have drowned. The search, both above and below the water, is filmmaking at its most glorious and suspenseful. The accidents are a catalyst for suppressed tensions to surface, and the film’s tone becomes abruptly somber.

Fear Me Not Among Danish director Kristian Levring’s considerable assets in this rich psychological thriller is the great actor Ulrich Thomsen. Ingenuously withholding energy, he portrays Mikael, a bourgeois whose psyche begins to unravel, possibly from new antidepressants, and who lives, ironically, in an open glass house. He is a descendant of James Mason’s character in Nicolas Ray’s mid-’50s Bigger Than Life, who OD’ed on cortisone and nearly sacrificed his son. Mikael’s unpredictable actions, especially against his wife and daughter, defy codes of civilized behavior. This is classic return of the repressed, the product of some childhood trauma.

Here and There An excellent tale of two cities, New York and Belgrade. The American protagonist, a quiet, debt-ridden downtown musician named Robert, flies to Belgrade in exchange for cash from the Serb, Branko, a high-energy survivor who lives in New York. Working illegally, Branko is unable to return home to retrieve his fiancee; the plan is for Robert to marry her, then bring her over. Serbian filmmaker Darko Lungulov has lived in both urban locales and, without romanticizing, beautifully captures their textures, intercutting the footage so gracefully that the cities almost meld into one. He’s also right on with the oddballs he films in both places. The more affecting love affair turns out to be Robert’s, a slowly simmering one with Branko’s lonely middle-aged mother.

My Dear Enemy South Korean director Lee Yoon-ki’s fine film is combo chamber play and road movie. A resentful young woman drives her ex-boyfriend all over Seoul to collect from his pals, relatives, and assorted girlfriends money he never paid back. She is serious, uptight, a little plain; he is a handsome, playful manipulator. The Seoul of the movie is one of overpasses, tall buildings, fast-food chains, all nicely rendered– OKAY, architectonic!–which often register for just as long as it takes to whiz past. During the brief encounters we meet some unforgettable residents, ranging from a needy older female executive to a biker cousin to a wealthy prostitute.

Pandora’s Box Arguably the best of all. Turkish director Yesim Ustaoglu’s splendid, vivid movie focuses on three generations of one family. Grandma is a mountain villager with Alzheimer’s who tends to get lost. Her two self-absorbed middle-aged daughters and unreformed hippie son are urbanites who squabble while driving from Istanbul to “rescue” her, and battle even more once they take her to the city and cage her in. Only the old woman’s unmotivated, pot-smoking teen grandson shows the old woman unconditional love. Ustaoglu has gifts for shooting magnificent natural and city landscapes and unflinchingly tackling interpersonal tensions. 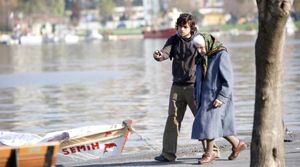 Still Walking Japanese filmmaker Kore-eda Horokazu’s movie is revisionist Ozu, a reference to that late director’s quiet, deceptively simple family studies. Kore-eda observes one extended family for 24 hours on a hot summer day while they are gathered at the oceanside home of the oldest generation for the annual commemoration of the drowning death 15 years earlier of a son, their favorite child. Not a lot happens: Grandma cooks, Grandpa complains, their adult children try to please, the grandkids play, but fissures among them become exposed, with a subtlety rare in the West.

Defamation Israeli filmmaker Yoav Shamir adopts an intentionally glib approach in Defamation, a well-researched, unapologetically subjective doc on contemporary anti-Semitism. Of the proponents of what he maintains is a phobia about anti-Jewish sentiment worldwide, Abe Foxman occupies center stage. A concentration-camp survivor and the head of the Anti-Defamation League (ADL), whose purpose is to fight and prevent anti-Semitism, he functions as comic relief. Shamir visits several countries and talks to rabbis, community leaders, his own grandmother, and men and women on the street. The shadow of the Holocaust still hovers. Shamir makes a case for that explaining Jews’ fear of the Other as well as Israel’s behavior toward Palestinians.

Rachel Buzz has it that American distributors are balking at acquiring this masterpiece of a documentary because it DARES to find fault with Israeli government policy–even though its Moroccan-born director, Simone Bitton (Wall), is an Israeli citizen. The point of departure is the 2003 death of 22-year-old Rachel Corrie, an American activist who was run over by an Israeli army bulldozer while participating in a nonviolent protest against the destruction of Palestinian homes in Gaza–material mined differently in the one-woman play, My Name Is Rachel Corrie. Bitton interviews Corrie’s fellow International Solidarity Movement members as well as official spokespeople in order to present varying accounts of the incident, but she makes her own position against the government’s account apparent from the get-go. Bitton is a rarity, a documentarian of strong conviction with a moving, lyrical style.

Soul Power American director Jeffrey Levy-Hinte edits the unused footage from the music concert that preceded “Rumble in the Jungle,” the 1974 fight between Muhammed Ali and George Foreman in Kinshasa, Zaire. The purpose of the event, held at the tail end of the Black Power era, was to bring African-American and African musicians together. Levy-Hinte inserts the musings of its participants and the sometimes dubious backstage arrangements. The doc opens and closes with the phenomenal James Brown performing. Other musicians include the Spinners, Celia Cruz, BB King, Bill Withers, and the late, great South African singer, Miriam Makeba.

Which Way Home One of the most powerful American docs in quite a while. Tenacious, New York-based Rebecca Cammisa (Sister Helen) spent several years in Mexico riding a freight train, called “The Beast,” interviewing and photographing teens and pre-teens from Central American and Mexico who were travelling for free to the U.S. to earn dollars to send home. Amazingly, she gained their confidence: They speak openly about such horrors of the journey as robbery, rape, bribery, and lost limbs. Like trains themselves, her style is poetic and kinetic. Some organizations and detention centers tend to the children’s needs, offering them, and us, a flicker of hope.

This Article is related to: Festivals and tagged Features, Festival Dispatch, New York