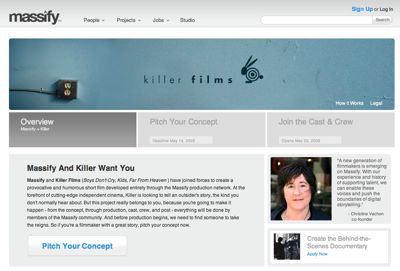 “”When I saw Massify’s website for the first time, I was really amazed at how energtic it was,” Vachon told indieWIRE over the phone today. “It’s so infused with this sense of possibility that a lot of things in movies don’t have these days… We started to come up with ideas, and it just seemed like a tremendous opportunity to access a whole new level of burgeoning talent that we haven’t been able to access.”

Vachon noted that Killer gets calls “a zillion times a week” from people anxious to show their work, and with the partnership with Massify, they have created a forum to accommodate those people. Directors can pitch their ideas for an original short film by submitting free-form pitch videos and screenplays. Once the Killer production team has selected the project concept, they will work closely with the selected filmmaker to attach cast and crew members from the community using Massify’s project platform. The final film will be fully funded through the partnership and produced by Killer Films, with principal talent receiving backend participation.

In addition, Killer is bringing in a docmentary filmmaker to produce a film about getting films made, interviewing Vachon and the many people she works closely with, potentially directors like Todd Haynes and Tom Kalin. Killer also expects the company’s circle of creative men and women to provide themselves as resource to the filmmakers chosen through Massify. “It really wont take much at all for me to get a Tom or a Todd to look at a project,” said Killer’s James Sehring – who is working extensively with Vachon on the partnership, which he said will last “at least” two years.

“It’s not like its gonna take the place but of the things we are doing already,” Vachon said. “But the business is changing from under our feet… I’ve always looked at change as an incredibly positive thing, and the fact is that now – as opposed to 15 years ago when I started – people do have the means to make movies with, say, their cell phones. And this an exciting way to tap into that. It’s easy for people my age – and I’m not making excuses – to sit around and talk about everything’s gone wrong. [In this business], it’s so hard to change direction. We’ve all been taught to do things in a certain way, so we need to ‘unlearn’ a lot. That’s part of moving forward.”

The site went live Saturday, and Vachon and her Killer team will start look at the first round of pitches April 14th. They expect production of the first short feature to begin toward the end of May.