Does It Take This Village? "White Ribbon" Ascends Art 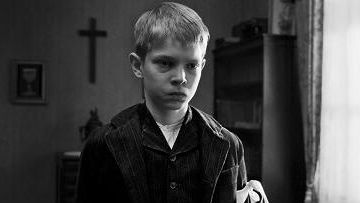 Despair haunts every moment of Michael Haneke’s “The White Ribbon.” The director’s dour, Bergmanesque black-and-white portrait of enigmas and familial discord in a Protestant German village at the beginning of the twentieth century peddles in the art of downbeat expressionism. Pairing visual mastery with a quietly immersive story, “The White Ribbon” plays like a morbid version of “Our Town,” patiently revealing the inward discord beneath the surface of a settled community. It’s a frightening depiction of mortality.

The story relies on the narration of a school teacher (Ulrich Tukur), who sets the stage for a year marked by unexplained circumstances: A farmer falls off his horse when it trips on a cautiously placed wire; several children go missing; one of them gets tortured; dead animals wind up in unlikely places. These instances punctuate the ubiquitous drama of the village residents’ lives.: A sexually dissatisfied man abuses his teenage daughter and insults his wife. The pastor rules over misbehavior with an iron fist. Rarely does anyone smile.

Haneke’s prosaic movement through the plot mirrors his despondent characters’ lives. He relies on narration instead of action to explain much of the exposition and tie up loose ends, leaving us to dwell in the mundane reality that’s left over. It’s an interesting way of exposing ideologically restrictive lifestyles, since the supposed perpetrators of the mysterious antics suggest a latent desire rushing to the surface. The white ribbon, a mandatory garb forced on young girls to remind them of “innocence and purity,” actually causes them to act out.

With this detailed exploration of anonymous retribution, Haneke returns to the haunting terrain he last explored in “Cache,” although in this case, the retribution expands from a personal level to a larger critque of religious zealoutry. As the violent acts cumulate, they expand to the larger world surrounding the village – especially with the political assasination and the eruption of World War I closing the movie. However, these events remain notably off-screen. Absence in “The White Ribbon” is the quality that makes it a harrowing work of art, rather than a historical soap opera.

This Article is related to: Festivals and tagged Reviews, The White Ribbon (Das weisse Band)