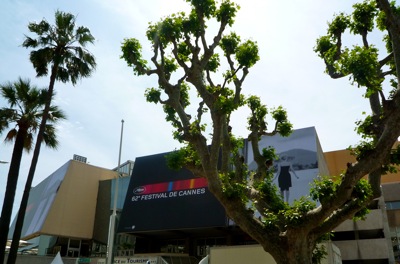 For two weeks, Cannes is the frontlines of international cinema. From here, many new films by established and emerging auteurs will make their way to festivals and movie theaters all around the world, via pacts and partnerships announced or forged here in France.

What I’ve always loved about this fest is that people take cinema so seriously here. Movies ignite debates and stir arguements. Where else but in Cannes would moviegoers booing a film by a Danish art film director stir international media attention. Granted, “Antichrist” stars Willem Dafoe and Charlotte Gainsbourg, but the immediate attention drawn by the contentious debut over the new Lars Von Trier film reiterated to me why Cannes matters. It matters because cinema still matters.

Industry insiders, film critics and festival programmers are constantly pondering the merits of both the art and industry, but from my vantage point, in a year where there is an apparent decline in attendance, the festival and market here in Cannes are still delivering on both fronts.

In the case of the Von Trier film, it seems more marketable 24 hours after its first screening than many would have assumed in wake of the first screening on Sunday night. The catcalls from critics last night, followed by a spectacular press conference performance this afternoon, has generated an unquantifiable amount of attention for the movie. Moments after last night’s screening I began getting text messages asking me about the movie, friends saying they couldn’t wait to see it, given the stir it caused in Cannes. An indieWIRE Poll today agreed with that assessment.

Throughout the day, Von Trier and “Antichrist” were the hot topic. And observers told me they couldn’t imagine the movie making it to the U.S. in the same version that screened here in Cannes. Sure it will. It can now ride into limited release with a base of awarenees. One buyer today emailed to say that he loved the movie.

“I thought it was amazing,” the anonymous insider said, “Masterpiece. Hope it wins the Palme.”

After its darkest moment, this year’s Cannes Festival took a turn. Like Hirokazu Kore-Eda “Air Doll,” Ang Lee’s “Taking Woodstock, and Hong Sang Soo’s “”Like You Know It All” here in Cannes, Ken Loach took a turn for the lighter side, following Von Trier in the Cannes competition with his crowd-pleasing “Looking for Eric.” This year’s fest seems to contain a number of filmmakers defying expectations by stepping out of their comfort zones.

With the screenings of “Looking for Eric” and “Antichrist” under its belt, the ’09 Cannes competition hits it’s midpoint tonight here in France. Ten down, ten to go. It’s been an engaging festival, with a compelling mix of excitement and disappointment.

Twelve days of moviegoing and movie business in the South of France is a particularly priviledged assignment, particularly in a period when so many people have lost jobs, seen companies downsize or disappear altogether. Those of us who are lucky enough to be here for Cannes #62 are getting a preview of what’s to come in cinema for the next year or more. And, this weekend Martin Scorsese took the stage to salute Roger Ebert at one event and then to announce a major new initiative to support and preserve international cinema.

However, the fest began on a sad note, with a memorial for the late Wouter Barendrecht, who died last month. The service on the first day of the fest drew a whos-who of the international film community.

If there is an obvious front-runner for the Palme d’Or from the first half of the fest, it’s clearly French filmmaker Jacques Audiard’s “A Prophet” (Un Prophete), a powerful look at the underworld of a Gallic prison starring breakthrough newcomer Tahar Rahim. It’s my favorite of the festival, so far, ahead of Andrea Arnold’s “Fish Tank,” which features a discovery performance. First-timer Katie Jarvis is a stand out, cast by Arnold while arguing with her boyfriend on a train platform.

Other personal favorites from the first half include “Bright Star,” the romantic return of Jane Campion, that will be released by Bob Berney’s new unnamed company, and indie entry “Get Me Some Rosemary,” by the Safdie Brothers who are in Cannes for the second year in a row.

Still to come, though, are anticipated Cannes entries from filmmaking heavyweights who’ve had success at Cannes in the past, namely Pedro Almodovar, Michael Haneke, and Quentin Tarantino. Not to mention anticipated new films from Gaspar Noe and Tsai Ming-liang, among others.

Coming up. Second half:

THURSDAY:
“In The Beginning” (A L’Origine), directed by Xavier Giannoli
“The White Ribbon” (Das Weisse Band), directed by Michael Haneke

Looking back. First half: