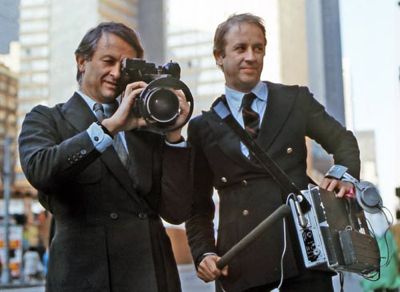 In the past month, I finally joined Twitter (as 1basil1). One thing I began to do, as I screened documentary submissions, was write Tweets headed “Dear Documentary Filmmakers:” – a way to both gripe about (and occasionally even celebrate) things doc makers do in their films and how film programmers react to them. I meant these notes to be funny, in a curmudgeonly way, but also instructive, born out of 13 years of watching thousands of film festival submissions of all types and of all lengths. I purposely omitted any information that could be used to identify either the films or filmmakers, or even for what entity I was screening these docs for.

Editor’s Note: Basil Tsiokos is Programming Associate, Documentary Features for the Sundance Film Festival. He also screens for POV, has been a guest curator for the Jacob Burns Film Center, and regularly watches hundreds a film a year through programming or at film festivals. He was previously the Artistic Director for NewFest for 12 years.

Most people (often fellow programmers, but also many filmmakers and non-film people) responded to the notes favorably, more often on Facebook than on Twitter, but I also received some feedback indicating that I was coming off as obnoxious or uncaring about the time, money, and efforts filmmakers put into their work. This was the furthest thing from my intent. Recognizing that people were connecting in some way with these notes, and that other readers might find it illuminating to learn what film programmers are looking for when considering submissions, indieWIRE asked me to contribute this article.

So, just to be clear, the following notes (each 140 characters or less, per Twitter) are not presented with malice, and are, of course, entirely subjective. There will be exceptions to virtually everything I say. Some things will seem incredibly obvious or basic, but if I’ve included them below, it’s because a lot of filmmakers (often new filmmakers, but it’s not exclusive to them) continue to fall into these traps year after year, film after film.

This is pretty self-explanatory – generally, programmers (and audiences) are looking for films with both visual and auditory interest. Your subjects may have interesting things to say, but never lose sight of the fact that film is also a visual medium. You could make a documentary by sitting someone down and turning a camera on, but it’s not typically going to be a completely engaging one.

To echo the previous note – a good general rule is to show it rather than say it. Yes, narration can be and has been used effectively in many documentaries, and sometimes it’s necessary to convey some information that otherwise would be difficult to impart to the audience – but it’s best used sparingly. I’ve seen far too many films that are drowning in voiceover narration, often spelling out what is already being shown on the screen, or otherwise covering over huge holes in the filmmaking. I prefer judicious use of titles instead – they are less obtrusive. If you do use narration, though, make sure that it’s a voice that your audience will want to listen to – clear and engaging vs inarticulate and sleep-inducing.

I know some audiences don’t like to read subtitles, but don’t let them be your target demographic. I also recognize that different cultures have different preferences for titles vs dubbing, but, in documentaries especially, dubbing is just simply distracting. Let your interview subjects tell their own stories in their own language and translate it with subtitles – this also of course allows audience members who know the original language the opportunity to hear what the subjects are saying, and it eliminates the problem of voice dubbers “performing” the dialogue. Also, you should consider subtitling inarticulate subjects for the sake of clarity even if they are speaking the same language as your subtitles.

– Technical Considerations:
Dear Documentary Filmmakers: Next time, hire a good sound person so that I won’t have to hear background noise or dead air in every scene.

As I just said, we want to hear what your subjects are saying – so please, do yourself a favor, and, within your budget constraints, find someone who understands how to work with sound. Obviously, this goes beyond sound to other technical considerations like lighting and cinematography. Really interesting subjects can be completely undercut if the way you’re filming and recording them ruins the film.

– Subject Selection:
Dear Documentary Filmmakers: Picking the right subjects to follow is so important. The ones in the film I’m watching are the right ones.

Documentarians find their interview subjects, and their topics, in many ways, but one stumbling block that often comes up is filmmakers spreading their topic too thin by featuring too many subjects all speaking about the same issue, leading to repetition and a lack of focus. Sometimes less is more, and one or two strong subjects will be much more effective than ten or twelve weaker voices. You need to ask yourself, “Does this subject offer something different or new that hasn’t already been discussed or hasn’t been said better by someone else?”

Before you ask yourself about what subjects to feature, you need to start by asking yourself, “Has anyone made a film about the same (or a similar) topic already?” If so, you need to bring something different to the topic. Each year, programmers at various festivals notice odd trends emerge – multiple films about the same topics, even incredibly esoteric ones. Sometimes they even feature the same interview subjects! Do your homework – find out if the film you’re going to spend months, if not years, making isn’t already being made by someone else. And if it is, and you still want to go forward, make sure yours will stand out. And yes, someone else has already made a documentary about the process of making a documentary or finding its topic. Meta-films like these are tough to pull off and make interesting – best to avoid the temptation altogether.

Finally, because the last Tweet above led to charges that I was being mean-spirited, I want to reiterate that I want these notes to help filmmakers. I love documentaries. I love that documentaries can offer new perspectives on the world. I love that, usually, even a “bad” doc can still teach me something. But wouldn’t it be preferable to make a more engaging, more watchable doc instead – and one that documentary film programmers feel that their audiences should see?

This Article is related to: Features and tagged Documentary