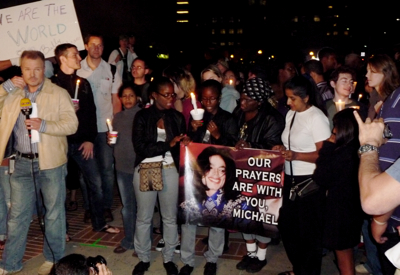 The day after the death of pop music icon Michael Jackson, media coverage alternated between reports and speculation about how he died so suddenly yesterday, to footage of his fans gathering at spots all around the world to pay tribute.

While not a fixture on the big screen, Jackson pioneered the small, bringing music videos to wide promience and pushing the form to cinematic levels, even though he was initially shunned by MTV.

Big budget music video productions for such songs as “Thriller” and “Bad” featured him collaborating with top name filmmakers of his time, from John Landis to Martin Scorsese. The short films were an event in their day, during a pre-YouTube era in which catching a rare television airing of the full length 13-minute “Thriller” mini-movie, for example, was an exciting moment for kids. The Zombie film was meant as a slightly frightening thrill for young teenagers and the dance moves have become such classics that flash mobs are mimicking the video this weekend in Jackson’s honor. Later he made an event out of his sixteen minute mini-musical short film for “Bad”, written by Richard Price and directed by Martin Scorsese and starring Wesley Snipes.

“Michael Jackson was extraordinary. When we worked together on ‘Bad’, I was in awe of his absolute mastery of movement on the one hand, and of the music on the other. Every step he took was absolutely precise and fluid at the same time. It was like watching quicksilver in motion,” Scorsese told MTV, “He was wonderful to work with, an absolute professional at all times, and — it really goes without saying — a true artist. It will be a while before I can get used to the idea that he’s no longer with us.”

Jackson’s screen career was ignited with his role in Sidney Lumet’s “The Wiz,” a filmed musical rendition of “The Wizard of Oz” featuring an all black cast. He played The Scarecrow. The film is screening this weekend as part of a previously scheduled all night event. MTV looked at his on screen legacy and his work with notable filmmakers, including Scorsese, Landis, Lumet and Francis Ford Coppola, while MTV.com includes high quality links to many of his music videos.

And now featured with indieWIRE’s partners at SnagFilms is a doc featuring a closer look at Michael Jackson’s diehard fans. The program features those fans during his trial four years ago. In the words of a Snag description, the film “dives deep inside the world of a group of Michael Jackson fans during the 2004-05 trial. The story delves beyond the tabloidesque media coverage of the crazy fan to uncover the human faces of the dedicated supporter.” Check the film out for free below…