It's About Consciousness: Louie Psihoyos's "The Cove" 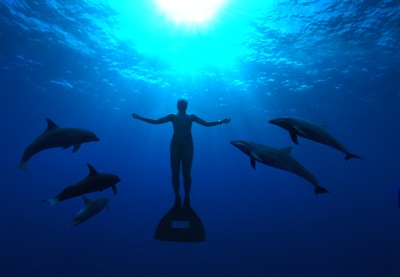 EDITOR’S NOTE: This review was originally published as part of indieWIRE’s coverage of the 2009 Sundance Film Festival.

Environmental documentaries suffer from the paradigm set forth by the success of “An Inconvenient Truth.” That means the genre is typically perceived as a haven for long-winded soapbox stands and dry moralizing under the guise of big screen entertainment. Louie Psihoyos’s riveting dolphin documentary “The Cove” offers the ideal alternative: It’s both an educational work of art and a classic espionage tale . Smoothly edited to the beat of an engrossing cinematic score, the movie focuses on the struggle of a few passionate activists attempting to save dolphins from capture under clandestine circumstances in a tiny cove in Taiji, Japan. Psihoyos uses this setting as a jumping-point for exploring the general problems plaguing Japan’s fishing industry, both for animals and humans alike.

When not touching on the broader issues — such as mercury poisoning that results from exported dolphin meat — Psihoyos lets his fascinating subjects tell the story, with particular emphasis on the expanding worldview of Richard O’Barry, the marine mammal specialist whose desire to ensure dolphin safety emerged when none other than Flipper died in his arms.O’Barry and his colleagues make daring rescue missions to the cove when faced by Japanese authorities that continually try to block their efforts. Psihoyos captures many of these sequences on camera, including the movie’s horrific climax, when a bloody dolphin massacre unfolds on several hidden cameras. The director manages to create an emotionally potent narrative without simplifying the altruism of his subjects. They certainly aren’t blind tree huggers. “It’s not about intelligence,” says one, rejecting the possibility of anthropromorphizing the creatures. “It’s about consciousness.”

This Article is related to: Reviews and tagged In Theaters