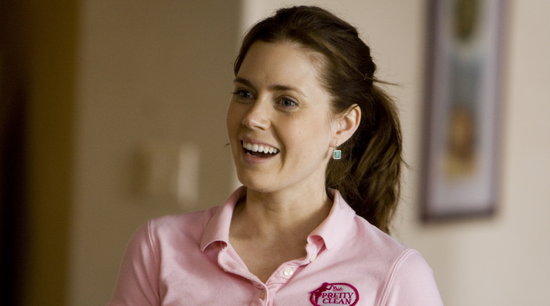 Independence Day has come and gone, and as specialty distributors rev up their late summer sleepers and award-seeking fall slates, it’s time to take a glance back at the last six months. While we all know Hollywood seems to doing fine – with help from “Transformers” and “Up” overall 2009 box office is tracking 10% above last year – the news in Indiewood isn’t as hopeful. Only two films – Christine Jeffs’ “Sunshine Cleaning” and Sam Mendes’ “Away We Go” have grossed over $5 million. At this point last year, the top five specialty releases – “Under The Same Moon,” “Miss Pettigrew Lives For a Day,” “The Visitor,” “In Bruges” and “Bella” – had grossed roughly $50.5 million (which was in itself a disappointment over the year prior). This year, that number stands at only $26.5 million.

But it’s not all bad news: Despite (or because of), Joaquin Phoenix’s infamously bizarre way of promoting it, Magnolia’s “Two Lovers” grossed $3.2 million (it also didn’t seem hurt by its day-and-date release on VOD); Recent openers “The Hurt Locker” and “Moon” appear en route to healthy final tallies; “Every Little Step,” “Valentino: The Last Emperor” and “Food, Inc.” have become sizable documentary hits; And “Summer Hours” and “Sin Nombre” and joined 2008 holdovers “The Class” and “Gomorrah” as rare foreign language films able to find larger audiences.

Here’s a more detailed break down of some notable winners, and unfortunate losers:

Focus has seen $101.6 million in grosses in 2009, roughly 2% of the overall marketplace. The only specialty division to do better is Fox Searchlight, though that is almost entirely due to “Slumdog Millionaire”‘s carry-over grosses. Though Focus’s success in this regard is also almost entirely due to one film – wide release “Coraline,” its smaller releases are notable as well: Sam Mendes’ “Away We Go” has grossed $6.1 million in its five weeks of release, and is tracking close to “Sunshine Cleaning”‘s 2009 high of $12.1 million; Cary Joji Fukunaga’s U.S. production “Sin Nombre” is one of the few foreign language bright spots, grossing $2.6 million – topped only by 2008 holdover “The Class” (and an honorable mention to “Class” distributor Sony Pictures Classics for consistency: All but two of their ten 2009 releases crossed the $1 million mark)

Amid reports of serious debt and internal restructuring, The Weinstein Company hasn’t really enjoyed a post-“Reader” afterglow. While that film’s surprise Oscar success and eventual $34 million gross defied numerous naysayers, their three 2009 titles have barely found a combined total gross of $1 million. “Killshot,” starring Mickey Rourke, Diane Lane and Johnny Knoxville, was in and out of theaters in 14 days – making just $18,643; Wayne Kramer’s “Crossing Over” found the distinction of becoming the Harrison Ford’s lowest grossing starring role ever, taking in only $455,654 (or roughly 1/60th of “Hollywood Homicide”); While “Fanboys,” which the company surely had high hopes for at one point, grossed only $688,529. 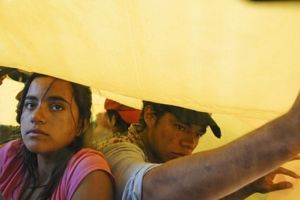 A scene from “Sin Nombre.” Image courtesy of Focus Features.

Though not a limited release (and thus not part of iW’s box office tracking), Focus Features’ 3-D animation hit – which grossed a stellar $75.3 million, just $8 million shy of the distributor’s record – deserves a special mention of its own, partially just to work as a counterpart to…

Roadside Attractions proved that 3-D doesn’t automatically mean big grosses. Their “Battle For Terra” – an eco-friendly animated story featuring the voices of Evan Rachel Wood, Brian Cox and David Cross, found the year’s worst wide release opening with just $1,064,000 from 1,162 screens. The film ended up with just $1,620,802 – making the third lowest grossing 3-D movie of all time – behind 2006’s “Night of the Living Dead 3-D” and recent release “Call of the Wild 3-D”

Alright, so this is perhaps just a coincidence, but superstitious industry folk take note: “Sunshine Cleaning,” “Away We Go,” “The Brothers Bloom” and “The Hurt Locker” all started in four theaters. And while this may not be of much consideration, the paths they took afterwards certainly are. “Sunshine” and “Away” in particular have had nearly identical expansion patterns, slowly heading toward 500 or so screens by week four, and as noted previously, its been working out for them.

What hasn’t been working – with the lone exception of “Coraline” – is immediately going wide. From bigger movies from studio’s specialty arms (“Adventureland,” “My Life In Ruins”), to aforementioned disasters like “Battle For Terra” and “The Informers,” opening in over 100 screens hasn’t worked out for anybody. Even “Rudo y Cursi” and “Cheri” – which debuted in 70 and 76 screens, respectively – have been relative disappointments. Gael Garcia Bernal-Diego Luna reunion “Rudo”‘s $1.8 million gross is a far cry from “Y Tu Mama Tambien,” while Michelle Pfieffer’s comeback attempt “Cheri” is struggling in expansion.

— this article continues on page two —

Winner: Documentaries That Came Out Of Toronto

It seems like TIFF has turned into a box office lucky charm for documentaries. All three specialty docs that crossed the $1 million mark in 2009 – Truly Indie’s $1.5 million grossing “Valentino: The Last Emperor,” Sony Classics’ $1.4 million grossing “Every Little Step,” and Magnolia’s $1.3 million-and-counting “Food, Inc.” – came out of the festival. And “Food, Inc.” is only its fourth weekend of release. This past weekend the food industry expose grossed a fantastic $251,684 on 83 screens, suggesting it could easily cross another million dollar mark or two.

Loser: Pretty Much All Other Documentaries

Outside of that triad of food, fashion and “A Chorus Line,” doc hits were few and far between. Abramorama found a $623,642 grossing sleeper in “Anvil! The Story of Anvil!” (which, oddly enough, is about a band from Toronto), while Sony Classics’ managed a somewhat disappointing $857,488 from high-profile “Tyson,” but otherwise, no doc was able to even cross the $500,000 mark. Notable examples include Magnolia’s “Outrage,” with its headline-making exposure of closeted Republican politicians, only grossed $263,762. 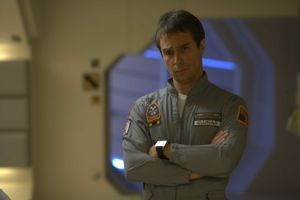 Sony Classics went into essentially unchartered waters with Duncan Jones’ “Moon.” The terms “sci-fi” and “indie” haven’t often been joined together, with a rare (and arguable) example in Danny Boyle’s 2007 “Sunshine,” which cost $50 million and grossed less than $4 million. But “Moon” – starring Sam Rockwell in dual roles – is an indie in a truer sense. A Sundance pickup, it cost only $5 million to make, and with its expansion going quite smoothly, its possible the film could approach its budget, out-grossing “Sunshine” en route.

Indie darlings they might be, but Zooey Deschanel and Paul Dano had a rough go at it with “Gigantic,” First Independent Pictures’ Toronto pickup. After a somewhat decent debut ($10,294 on one screen), the film crashed and burned in expansion, ending up with a final tally of just $102,704. Hopefully Deschanel and Dano will fair better later this summer with Fox Searchlight’s “(500) Days of Summer” and Focus Features’ “Taking Woodstock.”

Well, Iraq War movie. After years and years of films focusing on the Iraq War – from “In The Valley of Elah” to “Stop-Loss” to “Redacted” – failing to find an audience, most had given up on the idea of a financially successful film set in Iraq. And while it might be a bit too early to officially announce this very event, it seems fantastic reviews and a plot that focuses less directly on the political or social themes of the war and more on a deadly game of urban combat, has helped Kathryn Bigelow’s “The Hurt Locker” kick the losing streak. The film opened to a stellar $36,338 average – the year’s second best behind “Sunshine Cleaning,” and has grossed $370,123 in its first two weeks of very limited release.

Seven years after “My Big Fat Greek Wedding” became what will likely be considered the indie hit of the decade, Nia Vardalos is having a rough go at it. In June, Fox Searchlight’s “My Life In Ruins” tried to go wide against some big summer guns and failed, grossing only $8.3 million (which, at least, is $200,000 more than 2004’s “Connie and Carla”). Then last weekend, IFC Films released Vardalos’ reunion with “Big Fat” co-star John Corbett, “I Hate Valentine’s Day,” which grossed just $5,009 from 3 screens (though the film is said to be doing great business on VOD). 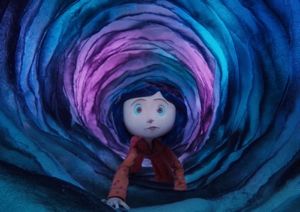 A scene from “Coraline.” image courtesy of Focus Features.

Endgame Entertainment head James D. Stern, who last month delivered an inspiring speech at LAFF that called for “smarter movies”, has certainly shown he can make profitable movies in Endgame’s three ’09 releases: “Every Little Step,” which Stern also co-directed, is one of the year’s highest grossing docs at $1.4 million, while “Easy Virtue” and “The Brothers Bloom” are among the few releases to gross more than $2 million dollars – with totals standing at $2.3 million and $3.3 million, respectively.

Big Beach Films pulled off an even more impressive hat trick in its 2009 slate. The company produced both “Sunshine Cleaning” and “Away We Go” – the year’s two biggest specialty hits, and found a sleeper in “Is Anybody There?,” which has totaled over $2 million.

Not to kick someone when they’re already down, but Senator Entertainment, which recently closed its distribution arm, is not having a good 2009. Its sole release, washed-up-star-studded “The Informers,” tanked, averaging only $622 from its 482 theater-wide opening. The film only lasted one week in theaters, grossing roughly $300,000. Since its unclear how the rest of the company’s slate – which includes Sundance pickup “Brooklyn’s Finest” – will be released, its likely “The Informers” will stand as the distribution arm’s lone release.

— this article continues on page there–

Since it’s hard to give a run down of everything good and bad in six months worth of box office, here’s a chart of 2009’s twenty highest grossing films tracked by the iW BOT (including films that screened only as an Academy-qualifier in 2008), as of July 5. Hopefully it will help fill in any blanks this article might have missed, and to make more clear just how scarce the “winners” really are: