Eugene Hernandez: It Came from the '80s 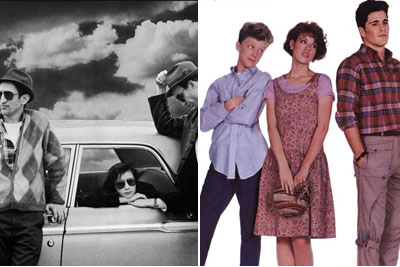 East Hampton, NY, August 9, 2009 — As crazy as it sounds, we’re closing in on the end of another decade. But, before focusing on the the best movies of the past ten years, I’m drawn to dwell on a different decade altogether. The 1980s.

I was chatting with my new colleague Anne Thompson the other day and she implored me to start writing a weekly column for indieWIRE. “Spend a few hours on a Sunday, writing,” she advised me. Frankly, the task is a bit daunting, but by Friday morning I realized that if I spent some time at my laptop today I’d have a topic worth exploring (at least this week).

The deaths of Michael Jackson and Farrah Fawcett on the same day earlier this summer inspired a deeper look at the music & TV of the ’80s. And then, Thursday’s sudden passing of writer/director John Hughes cast a spotlight on the mainstream movies of that much maligned decade, an era that was actually even more interesting because of what was happening on the margins of moviemaking.

“I don’t think I’m alone among my cohorts in the belief that John Hughes was our Godard, the filmmaker who crystallized our attitudes and anxieties with just the right blend of teasing and sympathy,” wrote New York Times critic A.O. Scott in a tribute to Hughes on Friday. “Mr. Godard described ‘Masculin Féminin’, his 1966 vehicle for Jean-Pierre Leaud and Ms. Karina, as a portrait of ‘the children of Marx and Coca-Cola’. Mr. McCarthy and Ms. Ringwald, in ‘Pretty in Pink’, were corresponding icons for the children of Ronald Reagan and New Coke.”

“In Godard, there is ‘God’,” I heard a film critic say — in front of Godard — at the Cannes Film Festival nearly ten years ago. To compare Hughes to that deified French auteur is quite bold, but I see what Scott is getting at. As a guy who was in high school in the ’80s (“Don’t You Forget About Me” was a song at my graduation), I appreciated Hughes’ sincere cinematic attempts to look at my generation. I like his movies, yet his smart talking Midwestern characters couldn’t have felt more foreign to a Latino kid at a Catholic school in Southern California.

Even so, Hughes’s movies captured that decade (and its conservatism) better than any others of the era. As A.O. Scott wisely noted, “The haircuts, the music, the clothes — it’s all there, and also something of the buoyancy and confusion of being young in those days when VCRs were still a novelty, and vinyl records were not yet obsolete, when text was not a verb, and the potential of the Internet was something not even the nerds of ‘Weird Science’ could intuit.”

What makes the ’80s so interesting, to me, is that while Hughes was exploring teen lives from Hollywood, in other parts of the country, a whole different set of artists were sowing the seeds of an American film movement brimming with promise. (One that would deliver both great thrills and some tremendous disappointments along the way).

Back on January 20th of this year, Inauguration Day, I moderated a panel at the Sundance Film Festival aimed at exploring the 25 year history of the festival. Steven Soderbergh, Barbara Kopple, Gregg Araki and Tom DiCillo were tapped to help discuss where independent film had been and where it was going. 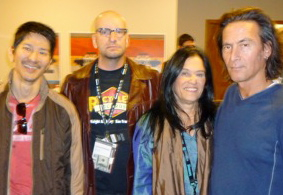 John Hughes’ directorial debut was “Sixteen Candles” in 1984, but since that panel seven months ago, I’ve spent a lot of time mulling the specific impact of another film from the same year. Namely, Jim Jarmusch’s “Stranger Than Paradise,” the film that changed everything for American independent cinema (as is chronicled in John Pierson’s essential, “Spike Mike Slackers and Dykes”). Jarmusch’s second feature debuted at the Cannes Film Festival just days after Hughes’ “Sixteen Candles” opened in U.S. theaters. And, as the panelists told me at the beginning of our Sundance discussion, Jarmusch’s film inspired a rush of creativity among indie-minded filmmakers.

Just ask Gregg Araki, who said that “Stranger Than Paradise” influenced him, Alison Anders, Richard Linklater, and many others. “We all were… young, and idealistic, like a lot of people,” he said at the panel, “When that film came out it was a huge inspiration for people like me.”

In addition to French New Wave influences, Jarmusch and cinematographer Tom DiCillo were also taking their cues from the work of filmmakers making movies in New York’s East Village: Amos Poe, Beth B, among others. “We were looking at these movies,” DiCillo recalled thinking, “My god, this is incredible. You could make a personal movie that somehow reaches people. The sense of freedom was unbelievable.” At the very least, it might be seen by other New York City filmmakers.

Frustration and isolation matched with freedom were common themes explored during that Sundance panel back in January. Creative sacrifices made for funding and then the challenges of distributing indie-minded movies via the Hollywood studios would become the hallmark of the ’90s American independent films, the panelists noted. Filmmakers fought to maintain their independence, despite their need for more money to tell their stories. Sometimes successfully and other times at odds with their backers.

His “Sex Lies and Videotape” formally ushered in a new era in 1989, the same year that Spike Lee carved out an indie niche with his studio movie, “Do The Right Thing.” In the twenty years since then, changes and challenges have fueled some films and filmmakers and hampered others.

“I just want to see something that was made by an individual,” Soderbergh said back at Sundance in January. “That’s what I want to see and I really don’t care who wrote the check. [Hollywood] is not a system devoid of filmmakers with creative control.”

Now, with the developments in technology making it that much easier to create and distribute movies, these filmakers who got their start in the ’80s are hoping to pass the torch to those who were born in the same decade.

“I am really looking forward to this next wave that are inspired by the old geezers like us and take the reins and make really interesting and innovative and challenging work and not just try to replicate the success of Tarantino or Steven [Soderbergh],” Gregg Araki said at the Sundance discussion. “I think that its really about those new voices and taking advantage of the technology.”

Wrapping up his recent appreciation of John Hughes, A.O. Scott mentioned the recent passing of Michael Jackson. “Their deaths make me feel old,” he wrote, “But more than that, they make me aware of belonging to a generation that has yet to figure out adulthood, for whom life can feel like a long John Hughes movie.”

Struggling with adulthood, for sure. I get that. But, here’s where I’ll respectfully disagree with Scott the most. Talking with Steven Soderbergh, Barbara Kopple, Tom DiCillo and Gregg Araki a few months ago, I felt quite the opposite. Experiencing their restless energy at a time when a bygone era seems to be slipping away is actually rather exciting. I’m thinking of that spirit of independence and freedom that fueled their early work and continues to drive their movies and those of many others. Better to err on the side of youthful creativity and experimentation, right now, I say.