EDITORS NOTE: This interview was originally published as part of indieWIRE’s coverage of the 2009 Sundance Film Festival. The film opens in theaters this Friday, September 4th.

Cherien Dabis’s “Amreeka” follows Muna Farah, a Palestinian single mom who struggles to maintain her spirit in the midst of the daily grind of West Bank checkpoints, a controlling mother, and a failed marriage. Everything changes one day when she receives a letter informing her that her family has been granted a U.S. green card She cautiously decides to quit her job at the bank and visit relatives in Illinois to see about a new life. The film premiered earlier this year at the Sundance Film Festival – since screening at New Directors/New Films and Cannes – and opens this Friday in theaters. indieWIRE spoke to Dabis about the film upon its Sundance premiere.

My Palestinian/Jordanian parents immigrated to Omaha, Nebraska – of all places – right before I was born. I grew up in rural Ohio, going back and forth to Jordan every summer. As a kid, I always felt that I never quite fit in anywhere. I wasn’t American enough for the Americans. And I wasn’t Arab enough for the Arabs. Of course it didn’t help that I inherited my father’s Palestinian national identity crisis, which only exacerbated my need for a place where I felt I belonged. What I eventually realized and learned to appreciate was that I’m neither Arab nor American, I’m somewhere in-between. And from this position, I have a unique window into two distinctly different worlds. The only way my life would make any sense was if I was able to bridge the gap between them. That’s how my need for artistic expression was born.

What prompted the idea for “Amreeka” and how did it evolve?

I became specifically interested in the media during the first Gulf War, when my experience as an Arab American in a small Ohio town changed drastically. We became the enemy virtually overnight. My father lost many of his patients because people suddenly decided that they didn’t want to support an Arab doctor. We got death threats on a daily basis for a time. And this is how bad it got: the secret service came to my high school to investigate a rumor that my older sister threatened to kill the president. As a 14 year-old, my eyes were opened to what can result from the stereotypes that the media propagates. I realized that I wanted to have a hand in changing the images that were (and still are) associated with being Arab. I spent the next decade exploring various forms of artistic expression from poetry to fiction writing to dance. But I gravitated toward film because it has the power to give people new eyes and ears from which to see the world. It speaks the universal language of emotion and has the potential to bridge cultures and reach the masses.

Coincidentally, I moved to New York City to start the graduate film program at Columbia University in September of 2001. So the events of that month very much set the tone for my film school experience. In the spring of 2003, Bush invaded Iraq, and history was repeating itself. Hearing stories of how Middle Easterners were once again being scapegoated was all I needed to realize that it was time to sit down and script my story. Rather than spin it into a heavy drama, I wanted to highlight the humor and absurdity of it all in a light-hearted drama that was universal and relatable. Five years, countless drafts and more than half a dozen development labs (from the Film Independent Director’s Lab to the Sundance Middle East Screenwriter’s Lab to Tribeca All Access) later, I was in production. 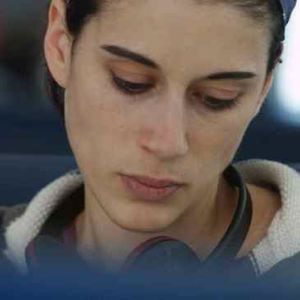 Please elaborate a bit on your approach to making the film…

My main concerns in making “Amreeka” were creating a sense of authenticity, intimacy and realism. I wanted to craft a genuine portrait of a Palestinian American family and imbue it with heart and humor. It was very important to me to shoot in the West Bank in order to capture the reality of life there and contrast the crowed, urban, sun-drenched Palestinian city with the vast, sparse and cold rural landscape of the American Midwest. It was also imperative to cast Arabs and Arab Americans in the lead roles. To me, this was the only way to achieve the authenticity that I was going for, the authenticity necessary for this film to stand out.

We shot in a loose, semi-documentary style with the Arri-416, which allowed us freedom of movement because it’s so lightweight and portable. And we planned long takes and fluid camera movements choreographed in congruence with the blocking of the actors to lend an organic, true-to-life feel. I used improvisational techniques in working with the actors to achieve natural performances and capture the honesty of human emotion. Throughout the process, I was influenced by the work of such directors as Mike Leigh, John Cassavetes and Robert Altman for their amazing ability to re-create the truth of everyday life. I also referenced photographers like Robert Frank, Gary Winogrand, Philip-Lorca diCorcia, Dorthea Lange and Lee Friedlander for their visual style, ironic wit and depiction of social issues.

What were your biggest challenges in developing the project?

One of the biggest challenges that I faced in developing the project was in finding a producer and securing the financing. I went out with the script in 2004, and at that time, everyone was interested in films about the Iraq war. Amreeka was “too light” and “too culturally specific.” And much like me, the film didn’t fit into any one category. It wasn’t American enough for the Americans and wasn’t Arab enough for the Europeans. After dozens of very nice rejections, I realized that I needed to look to my own community and partner with producers who shared my passion for telling this specific story. In late 2005, I met my producer Christina Piovesan whose mother was born in Haifa but grew up in Beirut. Christina was looking for Middle Eastern stories and loved the humor in the script so it was a good fit. Even still, we were both first timers so the challenge was great. But we were tremendously determined and resourceful. And eventually, the fact that I applied to every development program under the sun paid off in a huge way. We met our Arab American Executive Producer Alicia Sams through Beth Janson at Tribeca All Access, and that was it. That was the turning point that propelled us toward production.

Another big challenge was casting the film. For about six months, I traveled far and wide in search of the actors. Maria Nelson and Ellyn Long Marshal at Orpheus Casting put out several international casting calls and eventually helped me set up casting sessions in New York, Dearborn, Michigan (where there’s the largest concentration of Arabs outside the Middle East), Chicago, Los Angeles and Paris. When these cities didn’t pan out, I realized what I had suspected all along – I needed to go to the Middle East in order to find the most authentic actors possible, especially for the two lead roles – “Muna,” a 40-ish Palestinian single mom and her 16 year-old son, “Fadi.”

I traveled to Amman, Jerusalem, Bethlehem (where I practically dodged bullets trying to cast in a refugee camp), Ramallah, Haifa and Beirut to conduct casting sessions and met with hundreds of actors. I was starting to feel like I’d never find my “Muna.” Then it happened. In Haifa, I found theater actress Nisreen Faour who embodied so many of the characteristics I sought for “Muna.” I was beyond thrilled. But casting the role of “Fadi” proved to be even tougher. I saw dozens of teenagers, mostly non-actors and no one was quite right. Finally, I begged my Ramallah-based casting director’s son to audition. And when he did, he left quite an impression. A few callbacks later, he had the part.

What are some of your favorite films, and what are your other creative influences?

Some of my favorite films are “The 400 Blows,” “The Bicycle Thief,” “Ali: Fear Eats the Soul,” “A Woman Under the Influence,” “Working Girl,” “Midnight Cowboy,” “In the Mood for Love,” “Hannah & Her Sisters,” “City of God” and “Women on the Verge of A Nervous Breakdown.” As far as my creative influences are concerned, I really admire Jim Sheridan and Ang Lee for their humanistic approaches to political subject matter. I admire Wong Kar-Wai and Fernando Meirelles for their remarkable visual styles. And I’m a big fan of Hanif Kureishi and Guillermo Arriaga for their complex and deeply vulnerable characters.

That’s a tough question. There are a lot of practical measures for defining success: finishing a film, getting into a major festival, getting paid enough to support oneself. Those are certainly important milestones. But for me, success is a state of mind. It’s possessing the sheer will to keep going in the face of rejection. It’s getting the most you can out of the process of making the film. It’s persevering and moving on to the next one no matter how the current on is being perceived, knowing that each step of the way, you’ll learn and grow not only as a filmmaker but also as a person.

My personal goal as a filmmaker is to continue making socially responsible films that are accessible to mainstream audiences. Of course my passion is in specifically telling Middle Eastern stories because I see that as my specific contribution. Not to mention, we have so many stories to tell, and we could use some more of them right about now!

What are your future projects?

I’m currently working on my next screenplay, another light-hearted drama called “May in the Summer.” It’s about a thirty-something Palestinian American named May who escapes to Jordan for the summer to mend her broken heart after a bad break up. I’m also researching another film project – a historic biopic about a famous Arab singer.