Chris Rock: "Whatever they had in their hair, that's what I had in my hair" 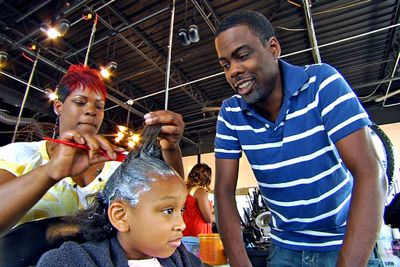 “I’m not saying anything about that – I’m not saying anything about Kanye [West] and end up on some rap album somewhere,” said Chris Rock laughing during an on stage interview at the Toronto International Film Festival yesterday afternoon. And with that, he launched into a mini-rap, “‘I got money, Chris Rock aint funny…’ There are just too many things that rhyme with ‘Rock,'” he snapped. The Kanye topic came up at a packed auditorium in Toronto which turned out to see the comedian who is here supporting his doc, “Good Hair” and an audience member asked him what he thought about rapper Kanye West’s behavior at the MTV Video Music Awards over the weekend.

But Rock didn’t demure over a range of topics spanning politics, Michael Moore, the Obamas and even the Jacksons (who get a bit of a verbal beating) during the hour-long conversation hosted by TIFF documentary programmer Thom Powers as part of the festival’s Maverick series. But it was hair, or specifically, the culture and economics behind black women’s hair, that took center stage. The genesis of his doc, which is screening as a Special Presentation at the festival, began when Rock’s young daughter asked, “Daddy, how come I don’t have good hair?” And in a style reminiscent of a Michael Moore film, Rock mixes humor and investigative journalism to explore the topic, from hair salons to laboratories and even the international trade in Indian and Korean hair, which form a cornerstone of a vast industry in which individuals pay thousands of dollars to maintain a perfect coiffe.

“Before the Obamas, the Jacksons were the first black family in America,” said Rock. “Whatever they had in their hair, that’s what I had in my hair growing up.” Chris Rock said he believed it was in the ’70s when blacks in America were “finally free,” and it was reflected in their hair. Afros bounced proudly as African Americans turned away from the heavy product and relaxers embodied by Nat King Cole and Sammy Davis Junior. Rock laughed, recalling how he was the first black kid in his school growing up. “It was, you know – shitty,” he said of his days at school.

But, turning back to the Jacksons, Chris Rock had no problem tearing in on late pop star Michael Jackson.

“Poor Michael – I wonder if they have hair care products in Heaven, er – or in Hell, or whatever…,” he said, then turning to Powers seated with him on stage, “You know, I think they make him do shows in Heaven, and then they send him back to Hell.”

Though he was a fan of the Jacksons growing up, he clearly has gained their ire now that he’s famous, and with lines like that, it’s probably not surprising. “I met Michael once. He just glared at me… And I’ve met Janet, and she just glared at me… Back when I was a kid, if anyone had told me that one day the Jacksons will want to kick my ass, I would’ve said, ‘You’re crazy!'”

Rock reserved compliments, however, for filmmaker Michael Moore who also was in Toronto promoting his new film “Capitalism: A Love Story.”

“I’ve always been a big fan of Michael Moore ever since I saw ‘Roger & Me’ 20 years ago,” said Rock. “I thought, this is funny and smart.” He said the style of filmmaking prompted him back then to consider “Good Hair,” but docs had not hit their stride yet, so he shelved the idea until his daughter brought up the topic years later and Moore and others’ success in documentary prompted him to reconsider.

“At the time [of the idea] Michael Moore was new, there was no ‘Borat’ and I was barely known, but now I have two daughters and I see their hair issues, so the idea came back. It’s a funny thing about hair. Li’l Kim and Michell Obama have nothing in common, but if you just say ‘hair,’ they’ll talk for two hours.” The comedian, who hosted the 77th Academy Awards in 2005, went on to say that he thinks this is his funniest movie to date even though it’s only PG-13 and mostly void of his typically sexually charged and expletive-laced stand up.

“This isn’t a topic about anything controversial – it’s hair!”