Harmony Korine: "I'm not going to lie and say that I don't like provoking an audience" 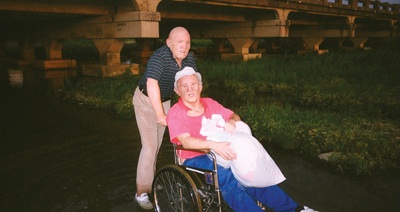 “I was inspired by the idea of finding an artifact found in an attic or a videotape buried in a ditch,” “Trash Humpers” director Harmony Korine said in Toronto, about his latest film. “I wanted to create something that was more like a feeling. I had to close my eyes and allow myself to get to a place where I could tap into ideas and images.”

Despite the hilarity or disgust factor in watching deformed old peeping Toms literally getting it on with trashcans, it’s nevertheless intoxicating and difficult to turn away, something akin to being mesmerized by a car wreck on the side of the road or even a flasher. You just can’t look away.

“Trash Humpers,” is somewhere between a snuff film and the home footage from the mutants in “The Hills Have Eyes.” The film, however, truly depicts the beauty in utter grotesqueries turned into an art form.

Korine, in an interview earlier this week in Canada, explained that he wanted to portray characters who had such abandonment and detachment from societal norms. He even wondered aloud whether this might make mainstream society envious of their social freedom. The story itself developed out of his daily routine as a child. While growing up in Tennessee, he used to walk his dogs through alleyways that were lighted by lamp posts that he describes as “beautiful and…theatrical.” The humpers in the film, who quite literally drop their pants and get frisky with trash bins, were inspired by peeping Toms in his neighborhood.

He refers to them as, “the neighborhood boogeymen who worked at Krispy Kreme and would wrap themselves in shrubbery, cover themselves with dirt, and peep through the windows of other neighbors.”

The director is, of course, famous for indulging his audience with imagery that is a challenge for the squeamish. When asked about provocation, Korine commented directly, “I’m not going to lie and say that I don’t like provoking an audience. What I want to provoke is a real reaction. I can’t imagine making something and not wanting people to feel it even if a large portion of the audience doesn’t want to have anything to do with the feeling. With this film I was really interested in making something real with a tangible message.”

In “Trash Humpers,” Korine’s character, who is mostly behind the camera, has this wailing banshee laugh that is quite haunting. Scenes that tease the senses are recurrent in his work, such as the bathtub scene in “Gummo” for instance. Korine said that he doesn’t think about these scenes or sounds when he is making the film. “If it feels right to me. If there is some strong, palpable, raw quality in the moment then I won’t question it.”

With “Gummo” and “Julien Donkey-Boy” each occupying a cult status, it only seems right for Korine to return to his previous form with morbid settings and disturbing characters. The aesthetic may be similar, but the idea behind “Trash Humpers” is a totally new concept. Although the film has some resemblance to a Dogme 95 film, like his previous “Donkey-Boy,” Korine said, “Technically, I wasn’t consciously referencing anything from my past movies with ‘Trash Humpers.’ I wanted to create something honest and true about the feeling of what it would be like to find something. Thematically, the characters and scenes are similar to my older films.”

In this film, Korine says he’s trying to portray what he sees as the “American Landscape.”

“[The film contains] an elaborate series of park garages and back alleyways, and beautiful lamp posts that light up the gutter,” he said. The film also captures the underbelly of the American Dream, according to Korine, complete with the broken jagged white picket fences and smashed television sets. The characters in the film are “the people lurking in the shadows, the shape shifters that sleep under bridges,” which Korine calls the “artists of mayhem.”

“The poets of murder – somehow I managed to make that artful and joyous even though these are truly the most demented characters I’ve ever filmed.”

What ever happened to “Fight Harm?”

Turning away from “Humpers” for a moment, Korine reflected on his pre-“Gummo” project, “Fight Harm,” which he described as a film about confronting people on the street and soliciting a fight. Korine allegedly could not throw the first punch, and the crew could not stop any fight that occurred, unless he was going to die, he once said in an interview.

Korine says that he goes back and fourth on whether he will release any of the footage, which is locked away in a safe and unseen in a “very long time.” The director says that he’s worried that if the footage is released, the concept of the film will be virtually lost.

Going forward, Korine said that he recently finished a new screenplay that will be “slightly more conventional” – a comedy. Subscribing a genre to “Trash Humpers” is difficult, but the roars of laughter from the crowds during the TIFF screening would suggest a comedy. Korine says that he didn’t deliberately mean for it to be funny, though. “It’s more like a true horror that captures an ambiance in a small town.”

Check out an exclusive scene from the film here at indieWIRE.