REVIEW | For the Love of Trash, Korine's "Humpers" Fetes the Freak 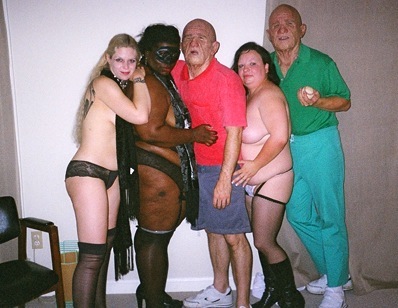 If “Mister Lonely” suggested that Harmony Korine had developed a sentimental streak, “Trash Humpers” proves that his original subversiveness was merely in hibernation. The movie, a succession of incomplete scenes shot on lo-fi video, plays like a first person version of “The Devil’s Rejects.” A psychotic family with shriveled mugs resembling Freddy Kruger live together in an undisclosed suburban setting, mulling about their deranged existence while engaging in eerie behaviors and the occasional murder. Unquestionably Korine’s most experimental production, it cycles through scenes as if assembled from found footage. But there’s an engaging connectivity to this vision of savage outsiders, both within the context of its fleeting 78 minutes and when considered in relation to the larger framework of the director’s consistently provocative career.

You can see why Werner Herzog loves this guy: Like the German auteur’s best narratives, “Trash Humpers” not only sympathizes with socially ostracized misanthropes — it adopts their perspective. The camera observes their lifestyle and the cameraman (generally one of the wrinkled characters) frequently engages in it. Constantly heard chanting “Make it, make it, don’t take it” and an eerie tune about “three little devils,” he provides the lunacy with a makeshift avant garde soundtrack. These beastly creations certainly march to the beat of their own drum. Korine brings us into a hermetic world not unlike Todd Browning’s “Freaks,” where things that initially seem dark and unsettling become normalized.

Of course, the premise of “Trash Humpers” contains purely absurd connotations. The title is a literal description of the maniacal protagonists’ unlikely sexual proclivities. Only those compelled by the allure of attempting to comprehend its vulgar tongue-in-cheek appeal will access the fascinating madness beneath its juvenile surface. Recalling the profane performance art of Brock Enright, the humpers’ insane behaviors imply a universal tendency toward self-destruction. Garbage sex is just one aspect of their collective perversions. One of them casually fellates a tree in their backyard, another reams a doll, and the whole lot gets a kick out of smashing television sets. These oddly emblematic behaviors, coupled with scenes of the humpers listening to friends recite poetry in shadowy backdrops, turn the movie into a deeply encoded social critique. When a cross-dressed hermit laments “the grizzly facts of what civilization has done to us,” his resentment hangs in the air. It’s a collage of Americana gone mental.

Since “Gummo,” Korine has made it his prerogative to make poetry out of nightmarish imagery. Digital video suited his gritty style in the Dogme feature “Julien Donkey-Boy,” and the old-school VHS look pushes it even further. The degraded colors and intentional tracking problems create a filter of decay that defines each scene. Korine challenges viewers (those willing to sit through the whole thing, anyway) to deny the movie’s mesmerizing appeal. Amidst the chaos, he mines for unsuspecting beauty: An overweight prostitute in tight lingerie sings “Silent Night” to a captivated audience. One of the demented friends of the humpers holds court with a nearly moving soliloquy on why the world would improve if people were headless (“Everyone could eat off the table”). In these compelling moments, Korine shows that his creativity comes from fierce convictions about the wisdom of outcasts. The stars of “Trash Humpers” celebrate their naughtiness because nobody bothers to stop them. The same observation could easily apply to Korine himself.