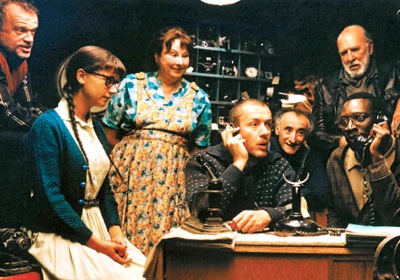 Jean-Pierre Jeunet’s signature films, including “Amelie” and “City of Lost Children,” have functioned as gateway drugs, getting the previously uninitiated hooked on the habit of foreign film. Romantic enough to please what we now think of as the “Twilight” set, and so highly visual that little is lost in translation, they’ve infiltrated hard-to-reach demographics and awakened appetites for adventurous cinema in viewers who didn’t know they had them. Whether you love Jeunet’s films for their technical virtuosity and pervasive sense of wonder, or hate them for their unrelenting whimsy and fetishization of fate, these seamlessly rendered, mostly live-action fairy tales have probably turned thousands of art-damaged American adolescents on to their logical precursors: Tati, Bunuel, maybe Russian animation or French silents. Anyone who has been so touched by a Jeunet film in the past will probably find it impossible to resist “Micmacs,” in which Jeunet applies his patented magical realism to a soft satire on weapons proliferation and contemporary cultural warfare. For Jeunet’s haters, this film will be torture.

French comic Dany Boon stars as Bazil who, we learn in a breakneck prologue, lost his soldier father to a landmine when he was a little boy. Decades later, Bazil is working at a video store when a bullet from a street shooting comes flying through a window and gets lodged in his skull. Bazil survives, a bit twitchy but not terribly worse for wear, but when he emerges from the hospital he finds that his apartment and job have both been given away in his absence. Bazil bums around for a while and soon falls in with an ad-hoc family of misfits living underneath a salvage yard. A kind of rag-tag band of minor superheroes with individual talents — one’s a contortionist with a built-up resistance to cold; another can measure anything with her eyes –– the crew have a built a live-work laboratory where they invent toys and gadgets out of the refuse. When Bazil decides to enact revenge on the dueling arms manufacturers responsible for the bullet in his head and for his father’s death, his new friends supply the hacked-together hardware.

In “Micmacs,” chaos theory rules, but Jeunet mostly throws out the scary implications and keeps the cute stuff about strange attractors and interconnection. He’s so invested in the law of happy accidents as a worldview that his worlds, though incredibly dense with psychic irregularities and sheer accumulations of stuff, inevitably feel suffocatingly small. Given the rules of Jeunet’s game, Bazil could probably easily track down the man who shot him or the one who planted the bomb who killed his dad –– it would probably take nothing more than a butterfly flapping its wings to put Bazil in the same room with both of them –– but he thinks bigger. As Bazil sets up a series of escalating pranks that’ll inevitably lead to much grander implications for the whole of the arms industry, the film’s narrative chips fall in line like dominoes.

In addition to Jeunet’s usual visual signatures and the touch of silent comedy lent by Boon, “Micmacs” most calls to mind the work of Swiss artists Fischli/Weiss, particularly their famous film “The Way Things Go,” a thirty minute document of a massive Rube Goldberg machine built from recycled household items. “The Way Things Go” is about a chain reaction of little things leading to total destruction, and so is “Micmacs” in its way, but Jeunet is careful to keep his destruction mired in the aesthetics and politics of storybook fantasy. And yet, in an oddly modern twist, “Micmacs” acknowledges that the most powerful weapon morally just little people have in their fight against corrupt big bad guys is the internet. Welcome to the first fairy tale to build its happy ending around YouTube.

This Article is related to: Festivals and tagged In Theaters, Reviews