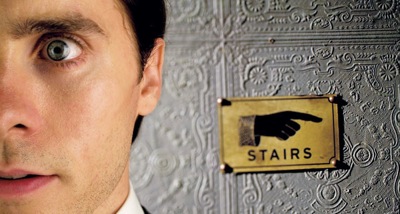 Quick, what do string theory, the butterfly effect, 21st-century dystopia, the possibility of quasi-immortality, the unquantifiablity of time, the impermanence of memory, death, love, second sight, the heartache of divorce, missions to Mars, and Jared Leto’s baby blues have in common? After seeing “Mr. Nobody” I’m still not sure, though I am confident that writer-director Jaco van Dormael seems to think they’re all part of the same thematic continuum. Almost moving in its gonzo self-assuredness and take-no-prisoners narrative scope — although with the nearly 140-minute running time, that could just be my exhaustion talking — “Mr. Nobody” is as ambitious as it is incoherent, an obvious labor of love that’s equal parts science-fiction, romance, and Lynchian mind game. Yet with the film’s maddening circular structure and often thudding visual expositions, the experience of watching it isn’t quite as enjoyable as a description might augur. The central problem of “Mr. Nobody” isn’t really that in the end it doesn’t seem to make much sense (literal, metaphorical, or otherwise), but that, unlike in the similarly intentionally befuddling “Donnie Darko,” the getting there isn’t all that fun.

When not hidden behind old-man latex in the film’s ostensible wraparound story, Leto seems cast first and foremost for his beauty, considering that he often has little more to do than look soulfully awestruck into a camera often pressed so close to his face that you can count the individual hairs of stubble on his chin. In fact, this reliance on extreme close-up seems to be the main aesthetic decision of van Dormael and his cinematographer Christophe Beaucarne; the result is an incredibly claustrophobic, spatially disorienting visual experience that makes the already damn near impenetrable narrative doubly disconcerting.

“Mr. Nobody” opens, appropriately, in a morgue, before going on to show us, in quick succession, all sorts of bizarre end-of-life scenarios that befall our protagonist, Nemo, from a terrifying drowning to a shocking bathtub shooting, to a 112-year-old version of hinself at death’s door, insistently rasping that he’s actually 34 years old. In this section, the film offers all sorts of satiric images of future shock, including a Perez Hilton–type gossip show host, with his microphone surgically implanted in his cheek, cattily discussing the human race’s necessity for stem-cell compatible pigs and promoting the TV broadcast of this “last mortal”‘s final days on Earth. This broad, comedic approach, however, is summarily dropped, and, after a bizarre tangent featuring (wait for it) unicorns and “angels of oblivion,” the film settles somewhat into a dramatic coming-of-age narrative, showing Nemo’s upbringing, from the wrenching divorce of his parents, who made the horrific decision to force little Nemo to choose between them, to his various romances and heartbreaks as a gorgeously troubled, and unexpectedly British, teen (Tony Regbo).

The problem is that van Dormael’s take on these moments is so dramatically forced, overlaid with so much melodramatic posing and mystical non sequiturs, that it never gives us the human and emotional grounding we need for the rest of the film’s fanciful, dreamlike roller coaster narrative to function in any meaningful way. Constantly looping back on itself, showing without warning various scenarios that could have been in Nemo’s life, including his domestic existence with three different wives (Sarah Polley, Diane Kruger, and Linh Dan Pham) in disparate dimensions, while also finding time to fold in an entirely separate outer-space thread based on a short story written by teenage Nemo, “Mr. Nobody” seems more interested in impressing and confounding its audience than in making a rich, rationally existential statement (like, say, the similarly mammoth, difficult, but infinitely more rewarding “Synecdoche, New York”). Van Dormael’s need to show off is evident in his every shock cut, in his choice to film a terrible car accident in elegant slow motion, in his expertly timed musical cues, which use everything from Erik Satie to Buddy Holly, employing them for either earnest or ironic effect.

Surely “Mr. Nobody” must cohere in its maker’s mind, but he’s unable, perhaps willfully so, to translate that vision to the screen for the viewer. Naturally for a film this steeped in its own construction, there are oodles of film references, from Lars von Trier’s “Europa” to “Harold and Maude” to, most bizarrely, “A Woman Under the Influence,” in a squirm-inducing scene in which Polley’s depressed housewife joins their daughter’s birthday party and proceeds to make herself into an embarrassing dancing child. Polley, ever the game actress on the lookout for idiosyncratic films, performs the scene well, but the odd, Cassavetes-cribbed naturalism of the scene speaks to “Mr. Nobody”‘s anything-goes hamfistedness. Perhaps it’s appropriate for a film that seems to proscribe so heavily to chaos theory: with no unifying deterministic vision, from scene to scene van Dormael just goes whatever way the wind blows.