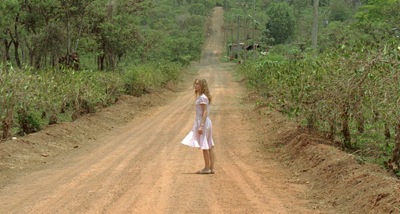 At one point in Claire Denis’s ravaging new film, “White Material,” Isabelle Huppert’s Maria, a coffee plantation owner in an African country increasingly torn apart by escalating civil war violence, is driving her grown son, Manuel, on a tractor to bring him medical attention for a minor injury to his foot. Since she has been warned time and again to evacuate for her and her family’s safety, along with the few other French nationals who remain there, she must constantly defend her decision to stay, yet now as she drives on, the rickety machine’s motor drowns out her words. She tells Manuel that there is nothing to worry about, that reports of strife have been exaggerated, and that they cannot give in, yet soon we cannot hear her at all. It’s not just her white pride of ownership that causes such surety, but also her increasingly deranged hubris, one cultivated over years of embodying superiority in a place she has wrongly deemed her own.

Of course, postcolonial critiques are not wholly unexpected in French art filmmaking, and neither are dramatizations of war-torn Africa from white perspectives uncommon. Yet with Claire Denis at the helm, this is hardly the same old story. While less abstract than many of her other works, “White Material” is similarly open-ended and purely experiential, and its way of playing with viewer identification with its protagonist is reminiscent of such works as “L’Intrus” and “I Can’t Sleep.” In this case, one might assume initially that the film’s strong Caucasian female lead is in some ways a surrogate both for its implicitly white audience and its, well, strong Caucasian female filmmaker. The growing disconnect we feel to the irrational, stubborn Maria, however, makes “White Material” a frustrating and illuminating experience.

Yet Maria is no white devil, and the Africans surrounding her are neither savages nor victims. She evidently views herself both as a special case and just one of the common folk, and her double self-identification as insider and outsider is her downfall. Her refusal to leave, and to keep her coffee plantation in operation (the coffee’s value will increase, she frantically insists) naturally requires assistance, and she summons remaining villagers to work for her, none of whose fears she seems willing or equipped to assuage.

If this description makes the film seem like a character study, of course Denis approaches it in her usually unconventional way. The narrative is told prismatically, so that we’re constantly shifting in time, watching small events unfold both before and after the town explodes into chaos, and all we have to chart our course are her changes of clothes from gingham to linen. At the start of the film, we are thrust into a motion that will never let up (this is probably the closest Denis has ever come to an action film), with Huppert desperate to hail a ride from a dusty street in the middle of nowhere; whether she’s trying hysterically to get out or to get back home is initially unclear and remains one of the film’s lingering queries.

What right does she have to be there? This might be the essential question of “White Material,” yet Maria is hardly the film’s only character. Christophe Lambert gives a surprisingly fragile performance as her ex-husband, while Nicolas Duvauchelle is downright frightening as the beautiful, blond, lazy Manuel, who descends to peculiar pathological depths and thrusts himself into unexpected action. Meanwhile Isaach de Bankole’s elusive rebel fighter the Boxer’s sudden presence in Maria’s shed, injured, contributes to a blindsiding climactic bit of reckoning. “White Material” has a hectic power, fueled by constant unease, captured by Yves Cape’s intense roving camerawork, culminating in a provocative ending that turns the entire film’s portrait of racial and familial dynamics on its ear.