REVIEW | The Coens Get Personal With Oddly Compelling "Serious Man" 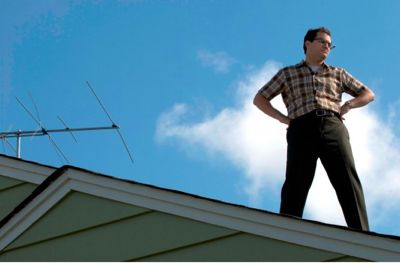 If Joel and Ethan Coen’s “A Serious Man” were classifiable in familiar movie terms, one might consider this oddly compelling period piece as “The Chosen” meets “American Beauty.” But, as usual, there’s nothing familiar about the Coen brothers except their own quixotic ways. While their latest black comedy suggests a greater element of autobiography, it’s loaded with contorted stylistic flourishes and hilarious moments of baffling existential ruminations. Chronicling the relentlessly ill-fated exploits of neurotic Jewish math teacher Larry (Michael Stuhlbarg) in the late 1960s, it feels like a throwback to the “Barton Fink” days of spectacularly meaningless symbolism, loads of gallows humor and genuine directorial finesse. Coen fans should rejoice: For these guys, more of the same basically means a return to form.

Even with its recognizable tropes, there’s an element of ingenuity to “A Serious Man” when situated in the Coen canon. The movie synthesizes their past and present achievements. Recalling the situational comedy of “Burn After Reading” (which itself recalled the situational comedy of “Fargo”), Larry’s problems form a laundry list of insurmountable woes: He grapples with his nagging wife Judith (Sari Lennick) and her patronizing lover Sy (Fred Melamed), desperately tries to communicate with his aimless son (Aaron Wolff) on the brink of his bar mitzvah, dodges threats from a disgruntled student and feebly attempts to help his deadbeat brother (Richard Kind) solve a gambling problem. Though Larry’s troubles are exploited for the sake of the Coens’ prankish tendencies, he perseveres by way of spiritual convictions that play out with unexpected sincerity. Adopting a desperate stare and constant naivete, Larry oozes pathos. As an archaic symbol of the post-World War II nuclear family, he represents a dying breed, recalling Tommy Lee Jones’s resigned stance in “No Country for Old Men.” Thus, “A Serious Man” draws liberally from the Coens’ own work. At once devilishly confounding and mature, it’s unquestionably their most personal movie yet.

The facts speak for themselves: Born in the late 1950s, the Coens grew up in a Jewish suburb of Minneapolis most likely akin to the white picket fence world where Larry’s story takes place. As a gateway to the filmmakers’ nostalgia trip, the movie suggests an emotional honesty unseen in their previous films. If Larry’s community bears a resemblance to the one of the Coens’ youth, then we should be able to read it as a guide to the seeds of their inspiration. Larry’s son embodies adolescent confusion, but he’s also an essential witness (as the Coens may have been) to the religious community’s tired rituals and incessant vanity. Coen characters who want to control their fates generally suffer as a result, and Larry makes no exception. The odds are always against him. Despite his good nature, he’s punished for sincerity, a factor that injects the movie with secular convictions.

Nearly everyone in “A Serious Man” — including, it seems, the handful of rabbis that Larry visits at the brink of his frustration — constantly chase their beliefs in desperate attempts to maintain faith in some grand scheme, and yet a final cohesive vision never comes together. A lengthy anecdote about teeth with godly engravings goes nowhere. Various other narrative tangents, such as Larry’s attraction to a seductive neighbor seemingly lifted from “The Graduate,” merely pile onto the story’s existing density and occasional detract from its underlying substance. However, the Coens sustain the movie through its arbitrary moments thanks to their handy playbook of bizarre cinematic techniques, including offbeat musical montages, dream sequences and an array of compelling performances. It’s disorientation as entertainment. On paper, Larry’s plight almost makes sense, but the big picture remains unfocused.

Instead, we get fragments of ideas that implicitly criticize the restricted nature of Larry’s Jewish community. The Coens perfected the art of the strange a long time ago, but I’m not sure if they’ve ever been quite so esoteric: “A Serious Man” opens with a quote from the Talmudic scholar Rashi, drifts into a late-1800s prologue spoken entirely in Yiddish, and contains unsubtitled Hebrew school jargon. Larry’s wife tells him she needs a “get” — a Jewish certificate of divorce — so that she doesn’t become an “agunah,” a woman chained to her marriage. Since the Coens explain so little, many viewers will identify with Larry’s ongoing confusion. There’s an undeniable Biblical quality to his Job-like suffering as he desperately tries to justify his misfortunes. “Is Hashem trying to say we are all one?” he wonders aloud after a plot twist that would suggest as much. He gets no clear answer, and neither do we.

Still, the Coens actually manage to deliver a vaguely heartwarming fable about family bonds and coming-of-age experiences (the stoned bar mitzvah climax qualifies as one of their great set pieces). But just when the sentimentalism settles in, the brothers retreat from a neat finale, allowing Larry’s world to simply devolve into an endless tsunami of tsuris.

This Article is related to: Festivals and tagged A Serious Man, Reviews