Werner Explains It All: 10 Herzogian Insights 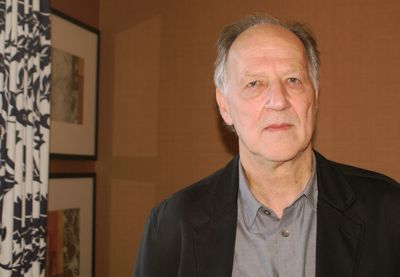 Werner Herzog has been the subject of much curiosity at the Toronto Film Festival. He has two films – both centered around policeman – screening at the festival in “The Bad Lieutenant: Port of Call New Orleans” and “My Son, My Son What Have Ye Done.” The former received considerable media attention when it was suspected that Herzog and the film’s star Nicolas Cage were remaking or creating a sequel to Abel Ferrara’s 1992 film (they weren’t), while the ultra low budgeted latter – starring Michael Shannon, Chloe Sevigny and Willem Dafoe – seemingly came out of nowhere to screen in Venice, Telluride and now Toronto.

indieWIRE got a chance to sit down with the director, and he gave expectedly glorious and Herzogian explanations of both the films and a wide-range of other topics from how he chooses projects to living in the United States to his plans to open a mobile film school. Instead of us neatly breaking up his insights into a conventional profile, it seemed appropriate to let them stand alone:

On people suggesting his “Bad Lieutenant” had anything to do with Abel Ferrera’s:

“The rights to the title were owned by one of the producers, who somehow speculated about starting a franchise. I immediately knew it was going to be wrong because my film had nothing to do with that other film with a similar title. But I can live with it. It’s very easy now that you have seen the film. You know, of course, that there is nothing to it… But that’s what movie making is also about: Wild figments of fantasy that disappear. I always knew it would disappear the moment it was shown to audiences.”

On always wanting to work with Nicolas Cage:

“For a long, long time – even decades – I somehow had an eye on the work of Nicolas Cage, and he on my work. But it never occured to either one of us to work together. And all of a sudden, almost at the same time, we had the feeling of ‘what an outrage that we have never collaborated.’ So there was this project and almost at the same moment we knew we would work together. It look less than sixty seconds on the phone and we knew we were in business.”

On the meaning of “The Bad Lieutenant: Port of Call New Orleans”:

“It’s fine to keep that open because each audience has the privilege to see it in his or her way. But I think it’s basically a new form of film noir… The climate of time is favorable for film noir. When there is insecurity in things like the financial system collapsing. It’s always in these moments, as an echo, that you see film noir coming up.”

On people’s reaction to the film:

On my suggestion he was a “founding father” of German New Wave Cinema in the 1960s:

“I’ve never been a founding father. I’ve never ever been a member of anything with the German Wave. I’ve always been on my own. As if I had even invented cinema myself. And in a way, I had to, because as a child – until I was even eleven years – I hadn’t seen any films. I didn’t even know cinema existed. And I didn’t have any telephones or anything. I made my first phone call when I was seventeen! Can you imagine that? So, in other words, cinema was something that in a way, I had to invent myself.”

On the evolution of his career:

“I’ve always moved onwards. I was always out for new horizons. But it has become more high-profile and visible since I live in the United States. Because some of the films have been much more high-profile like ‘Grizzly Man’ and ‘Rescue Dawn’ and now ‘Bad Lieutenant: Port of Call New Orleans.’ But I never really trot the same spot over and over. Since I live in America, it has become more visible that I have always been out for new horizons… And it has done me very good that I have not been repetitive over and over. And yet you instantly recognize ‘The Bad Lieutenant’ is my film and that ‘My Son, My Son, What Have Ye Done’… Even if I were not in the credits you would recognize it as my film.

“I have to caution you. You call it documentaries. I would only put it in quotations. Many of my documentaries are feature films in disguise [laughs]… I don’t take on projects. They find me. They haunt me. They come like burglars in the night. Like home invasion. I think there’s nothing wrong with a writer to write poetry and to write dramas. Or write a novel and then write a stage play. Everybody seems to be puzzled that I also make documentaries once in a while. I seem to be the only one. Feature filmmakers do not make documentaries. At least.. not all the time. I think that man, what’s his name, who made ‘Titanic.’ James whatever. I think he also is doing underwater documentaries. So there’s another one. But he’s more into what you understand as documentaries. Where I am disguising a feature film as documentary.”

On starting his own film school:

“I’ve also – oh yeah – started my own film school. “Rogue Film School”… It’s so beautiful this name, that I am seeking trademark protection. It will be like a traveling circus. Weekend seminars at varying locations. The first I will hold in Los Angeles in a rented conference center in a hotel. I could do it here in a few weeks in Toronto. I could do it in Africa. I could do it in Rome. It’s just wherever I am. I can open my doors and accept a very select group of eager young filmmakers.”

On the future of film festivals:

“You have to be cautious about film festivals. The time of film festivals is kind of declining and coming to an end like at the end of the 19th century when the big time of the world exhibitions slowly came to an end. Festivals will come to an end. And they will come to an end because many of them have become self-serving entities. And the real problem is that you have over 3,000 festivals in the world per year, but you do not have more than three or four good films per year. There’s a very, very dramatic disbalance between the amount of festivals and the amount of good films.”

On the Toronto Film Festival specifically:

Check out audio from the interview here.