Willem Dafoe: "I'm a happy guy, but I also think about death all the time" 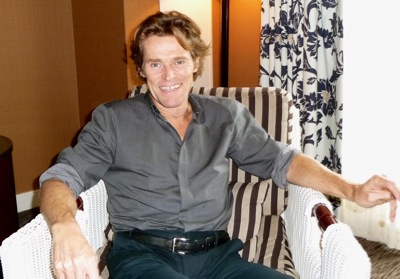 “The hardest thing in the world is feeling engaged with something you don’t find interesting. And so, the actual intensity of [this project] is something that I love,” actor Willem Dafoe told indieWIRE Friday afternoon in Toronto. And whether its a hypnotic jubilation of sorts or a tremendous sense of disgust, it’s hard not to be engaged by Lars von Trier’s latest, “Antichrist.” The film played to both praises and horror where it debuted in May at the Cannes Film Festival, causing quite a raucous at the press conference there.

Set amidst beautiful imagery and a tranquil bucolic landscape, “Antichrist” teams Dafoe and Charlotte Gainsbourg as a couple grieving over the sudden death of their young son. The two travel to the woods to get away, but while there they go to extremes that include graphic portrayals of torture and genital mutilation as they confront their loss and growing anger.

“It’s clearly not a movie that’s not for a mass audience,” Dafoe said in Toronto where the film had its North American premiere Thursday night. Though the veteran actor has played a wide range of roles in both mainstream Hollywood films such as “Spider-Man,” “Born on the Fourth of July,” “Platoon” or “Adam Resurrected,” he’s also taken on roles in more niche films such as “Paris, je t’aime” and “Ripley Under Ground,” which never made it out of the festival circuit in the U.S. Fans will also recall his portrayal of Jesus in “The Last Temptation of Christ.”

“I see darkness in a lot of my roles,” Dafoe explained, “I think a lot of the interesting stories come from outside the mainstream. Things are built to keep us in lockstep. I’m not a paranoid person, but darkness gets you in touch with [life] overall.” Continuing with the thought Dafoe added, “It’s good for me to get in tune with the beauty and mytery of life. I think if you’re in denial of that, then you just get in this game of striving to be ‘happy, happy, happy, happy.” Dafoe elaborated further saying that he feels “awakened” and “reinvigorated” by life’s underbelly, even if it’s not always pleasant.

When asked if he balances his roles between lighter v. darker or mainstream v. more specialty work, Dafoe pondered the question and then said he’s found a balance, but it’s not necessarily a conscious decision.

“It sort of happens naturally in picking my roles. It’s not so much thinking of how it’s playing or who it’s going to play to. I’ve had interesting independent roles that don’t get support and are bad releases, and in those moments, I’d like to be in a movie that is supported and of course, those tend to be more commercial.”

And, as with most actors, the temptation of a big production is alluring for Dafoe. “I’ve had the chance to do great stuff in the independent film world, but it is usually a certain type of filmmaking. When I do it, I can sometimes get jealous when I see great lighting and editing, which of course enhances the performance of the actor. I laugh sometimes when someone says to me, ‘Wow, you look so much better in person…,’ and then I say, ‘It’s because I was running around so damn ragged on set.'”

Dafoe, who last worked with von Trier on “Manderlay,” casually checked in on the Danish director, which lead to the role in his new film. The actor explained that von Trier was going through one of his depressions that left him barely able to leave bed, but at the time had been working on a script filled with his personal nightmares and fears. “I asked him to send it to me and I liked it, so he said, ‘do you want to do it…?'”

“There were no rehearsals, but we did some talking ahead of time,” Von Trier explained earlier in the day Friday, via satellite from his native Denmark, adding coyly, “I remember everything being happy and not too many arguments, but then I guess I tricked Willem and Charlotte into thinking I was depressed so they would do what I said…”

Though audiences here reacted mostly well to its North American debut screening, it remains to be seen how it will do in release once word spreads further of its graphic details – and surely IFC Films, which bought the film in Cannes, will open it without a rating (and uncut).

“I was [concerned] that it would never be released in the United States,” said Dafoe. “But when I heard IFC would take it, then I had a feeling it would be screened uncut. And honestly, if you’re going to release a film like this, then why would you want to have it cut?” Audiences in America will have a chance to take their first look next month at the New York Film Festival, and it will show up in limited release on screens and via on demand beginning in late October.

“The film wasn’t always the easiest thing to do,” sadi Dafoe. “But ‘hard’ is when you’re working like a dog and it’s not worth it.”

This Article is related to: Festivals and tagged Antichrist, Features, Interviews