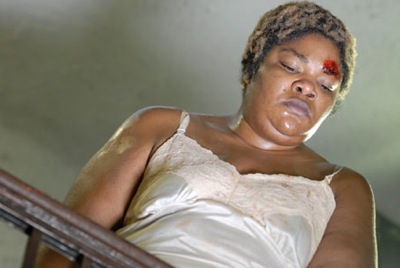 Lee Daniels’ “Precious: Based on the novel ‘Push’ by Sapphire” has exceeded even the highest of expectations in its opening weekend, according to estimates provided by Rentrak earlier today. The film – which has been the source of much anticipation and buzz since its Sundance debut in January – grossed a stunning $1,800,000 from just 18 theaters over the weekend, averaging an essentially unheard of $100,000. That gives it the third best live action per-theater-average of all time, surpassed only by 2006’s “Dreamgirls” and 2005’s “Brokeback Mountain.” However, those two films had opened on 3 and 5 theaters respectively. “Precious”‘s wide-by-comparison 18 theaters make it all the more impressive.

“Precious” was distributed by Lionsgate, who had acquired the film shortly after Sundance in a heated bidding war. The deal, brokered by Cinetic, was said to be worth $5.5 million, and weaved in the support of both Oprah Winfrey and Tyler Perry, who came on board as executive producers. The plan obviously seems to have worked so far, with theaters in New York, Los Angeles, Chicago and Atlanta reporting large crowds and sell out shows for “Precious.” The film grossed $587,859 on Friday, and then rose to $699,514 on Saturday (averaging $38,800 per theater on that day alone), and was estimated to take in an additional $512,627 today. That already makes it the fourth highest grossing Sundance Narrative Grand Jury Prize winner this decade.

The numbers countered the early expectations that director Lee Daniels says he had for the movie. “It’s still a bit premature as all the weekend numbers aren’t in yet,” Daniels told indieWIRE on Saturday, just as the film passed the $1 million mark. “Remember, I thought ‘Push/Precious’ was going straight to DVD and I was cool with that. So, when I got this info I was slayed.”

“Precious” will expand considerably this Friday, November 13th, both within the markets it debuted in and in the Philadelphia, Dallas, Washington, San Francisco, and Houston areas.

Debuting in “Precious”‘s shadow this weekend were three films that found nice numbers on sole New York screen debuts. Frederick Wiseman’s doc “La Danse,” which explores the Paris Opera Ballet, sold out all of its shows at New York’s Film Forum over the weekend, grossing $14,000. That took its total to $21,220 since opening Wednesday. Due to the heavy demand, a second screen will be added at the Film Forum next Friday – a very rare occurrence at a theater with little flexibility due to their calendar programming. Since the grosses were only limited by the number of screenings and seats. The nearly three hour running time limited it to three screenings per day in a 150 seat theater. But, the theater reported that the Friday shows sold out hours in advance, and the first two shows on Saturday sold out before the first show even began. Perhaps not “Precious” impressive, but certainly a feat in its own right.

Brant Sersen’s “Splinterheads” – a love story about a twentysomething slacker and a carnie that debuted at SXSW – grossed $12,000 at its lone engagement at New York’s Regal Union Square. The film – released by Paladin – will expand to Austin and Portland this weekend.

Another SXSW debut, Scott Teems’ “That Evening Sun,” grossed $8,912 from its one screen. The Freestyle Releasing film – featuring Hal Holbrook in an acclaimed performance – will expand in coming weeks as well.

In wide release, Overture Films found reasonable results from their debut of Grant Heslov’s $25 million budgeted “The Men Who Stare at Goats.” The film – starring Ewan McGregor, George Clooney, Jeff Bridges and Kevin Spacey – grossed $13,309,000 from 2,443 screens, averaging $5,448. It’s a comparable debut to Steven Soderbergh’s “The Informant!” – another Toronto Film Festival title with similar audience appeal – back in September. That film debut to $10,464,000, and has a total that currently stands at $32,818,796. Though notable is that Overture had two films in the overall top 10 (with “Goats” joined by “Law Abiding Citizen”), which is quite impressive for a company of its size.

Among holdovers, Troy Duffy’s “The Boondock Saints II: All Saints Day,” the third release from Apparition (Apparition is releasing the film for a fee on behalf of its rights holder Sony Pictures Worldwide Acquisitions Group), expanded from 68 to 105 screens and grossed $430,821. That gave “Saints,” the sequel to the massive 1999 cult favorite (which exploded on DVD after a nearly non-existent theatrical release), a decent $4,103 average and $1,247,352 total as it continues an aggressive expansion (125 more screens next Friday).

Continuing its slow-and-steady expansion was Lone Scherfig’s “An Education,” which went from 48 to 83 screens in its fifth weekend. The Sony Pictures Classics release – sure to be joining “Precious” in this year’s awards race – held on very nicely, grossing another $665,697. That made for a $8,020 average – just a slight drop from last weekend despite nearly doubling the screen count – and a new total of $2,381,127. The film will continue to expand through November.

Finally, another Sony Classics release – Anne Fontaine’s “Coco Before Chanel” became the top grossing foreign language film of the year by adding another $604,906 to its cume in its 7th weekend. On 301 screens, the Audrey Tatou as Coco Chanel French import averaged $2,010 and took its total to $4,166,809.