EDITOR’S NOTE: Every day for the next month, indieWIRE will be republishing profiles and interviews from the past ten years (in their original, retro format) with some of the people that have defined independent cinema in the first decade of this century. Today, we’ll step back to 2008 with an interview indieWIRE’s Erica Abeel had with Charlie Kaufman upon the release of his directorial debut “Synecdoche, New York.”

In the opening scene of “Being John Malkovich,” John Cusack is a street puppeteer controlling the interaction of his creations. Spike Jonze may have directed, but the film’s screenwriter, Charlie Kaufman, makes clear from the get-go that he is the master of the enterprise. The screenwriter as auteur. We see that again in “Adaptation,” also directed by Jonze, but the complex doubling of character is pure Kaufman. The non-linear narrative of “Eternal Sunshine of the Spotless Mind,” in which people can have memories erased from their minds, is Kaufman, not Michel Gondry.

With “Synecdoche, New York,” Kaufman’s directing debut, he gets away from his usual humor and becomes more serious. It’s not quite Woody Allen doing Ingmar Bergman, but it has the feel of a very old person philosophizing about life and death. Kaufman does it with a Russian-doll-like quality, layers upon layers of actors playing real persons playing actors. It is the story of playwrite Caden Cotard (Philip Seymour Hoffman), who suffers from several diseases, and it follows him from middle age to death. After moving from Schenectady to Manhattan, Caden attempts to organize his life issues as one huge theater piece, with New York City itself as a massive stage. An exceptionally difficult film to deconstruct, “Synecdoche, New York” is dense and powerful, a profound meditation on existence, and the art of existence.

indieWIRE: You say that you are moving in a more personal direction with “Synecdoche, New York.” I think of “Synecdoche” as a film by someone not so young. It’s mature in that sense, moving toward death.

iW: “Synecdoche, New York” deals with the synthesis of theater and film. “Adaptation” is a film about a novelist and screenwriter. “Being John Malkovich” begins with a marionette performance. There appears to be a mixture of all the arts.in your films. Are yuou interested in a lot of arts, or does it just come out that way?

CK: Both. I’m interested in art, and I think about the process of making art. It’s part of my personality, my experience of the world, so it ends up in the movies. It’s where my head is.

iW: The characters age several decades. I get the impression the shoot was rather intense.

CK: It was very hard. It was very hot. We shot in the summer in New York in an armory, in Bedford-Stuyvesant during a heat wave. There were times when the prosthetics guy had to come in and poke pin holes in Phil’s costume cause it was bubbling, because the sweat had nowhere to go. It was awful. Samantha [Morton] also had to contend with it.

iW: You have used Catherine Keener more than any other actor.

CK: She’s in three movies, one just a cameo, in “Adaptation.” I myself didn’t cast her in “Being John Malkovich.” I told her during “Synecdoche” (in which she plays Haden’s wife, Adele,who abandons him) that I want to put her in every movie. She’s real, she’s very truthful, she’s very present when she’s performing. It feeds the actors that she’s working with. If you’re really in a scene, you are by definition generous. Phil loves her, he loves working with her. It was really helpful to him to work with her. She’s fun and lovely.

iW: What is it that distinguishes Hoffman?

CK: He can’t do anything that isn’t truthful. He won’t allow himself. He works really hard. His commitment is complete. If he doesn’t understand something, he won’t do it. When he’s crying in a scene, which he does a lot in this movie, it’s like he’s going through it, and of course the camera records that. It hurts. And that’s what I needed for this character, and I got it.

CK: Spike was making another movie, and we could not wait for him. Moving from screenwriting to directing was stressful, but I enjoyed it. We shot most of it in 45 days. 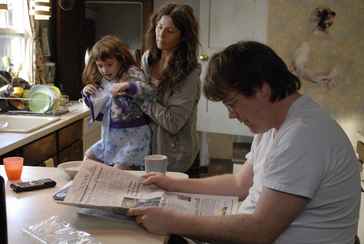 iW: What is your background, at least in the arts?

CK: I started out when I was a little kid thinking I wanted to be an actor. I read a lot of plays, did community theater and summer stock. I also had a Super-8 movie camera as a kid and made a lot of super-8 movies. I originally went to college to study acting, but I couldn’t do it. After my first year I transferred to film school and studied film production. I did a horror movie, I did a stop-motion animation of Boots Walking. But I was really interested in comedy.

I started writing and performing sketch comedy in high school. I think I was heavily influenced by Monty Python, and other stuff that I thought was self-referential.

iW: Would you refer to your humor as Jewish?

CK: I’m Jewish, and my family is Jewish. I was very interested in Woody Allen when I was growing up, but I don’t think of myself as a Jewish writer. I’m more from suburbia, American suburbia. I’m more from the ’70s than I am from Judaism

iW: Can you say something about your mental process when you are writing?

CK: I often have a theme in mind when I’m starting. I know that I want everytihing to be in a world of, say, evolution, or guilt. But also I do a lot of things intuitively. I’m not often consciously aware of what I’m doing. It’s like in a dream: There’s something going on that’s powerful but you don’t know exactly why. As I’m writing, though, I start to see connections, and themes I didn’t see, and that sparks other things. So then I go back and rewrite things or alter them. It’s a combination of intuition and a lot of finessing. It becomes a combination of the rational and the irrational. I always go in circles. I have OCD to a certain extent, so I tend to do a lot of circular thinking. I think I do have OCD a bit.

iW: What about the dreamlike quality, especially in “Synecdoche, New York?”

CK: I think dreams are metaphors. Everything you do in writing is metaphorical. So it seems like the same arena to me.

iW: In Cannes journalists were asking about Hazel’s (Morton’s) house being on fire, which wasn’t “explained.” Tthey wanted a concrete answer.

CK: I like for people to figure things out for themselves. It’s not like I have the right answer, but if I have a visceral reaction to something, I’m sure that other people will, too. And there are a lot of different things you can react to. It’s like a Rohrschach kind of thing. I try when I’m writing to leave enough “space” for people to have their own interpretation, and not to direct it toward one conclusion. Then the audience would not be reacting, because they are being preached to or lectured at. I don’t have that much to say that I think people should listen to me.

iW: Do you go frequently on sets, for films in which you are the screenwriter, to uphold an author’s rights?

CK: It’s not really combative. They won’t change anything in the script without asking me, and then I’ll make the changes if I agree to them. I spend a lot of time in preproduction working with them, and a lot of time in postproduction.: editing, music, all that sort of stuff. Casting. On the set there’s not a lot for me to do.

iW: “Synecdoche, New York” is marked by a high degree of scatological references.

You’re dealing with the body, and you’re dealing with bodily functions. We romanticize everything about people in movies, and I decided that one of the things I don’t like in movies is that people feel alone with their bodily functions in the real world, as if people in the movies don’t do these things. We had a lot of fun making the different artificial feces in the prop department.

Decade: Darren Aronofsky on “Requiem For a Dream”

Decade: Kenneth Lonergan on “You Can Count On Me”

Decade: Agnes Varda on “The Gleaners and I”

Decade: Wong Kar-wai on “In The Mood For Love”

Decade: John Cameron Mitchell on “Hedwig and the Angry Inch”

Decade: Miranda July on “Me and You and Everyone We Know”

Decade: Noah Baumbach on “The Squid and the Whale”

Decade: Ryan Fleck on “Half Nelson”

Decade: Sarah Polley on “Away From Her”

Decade: Paul Thomas Anderson on “There Will Be Blood”