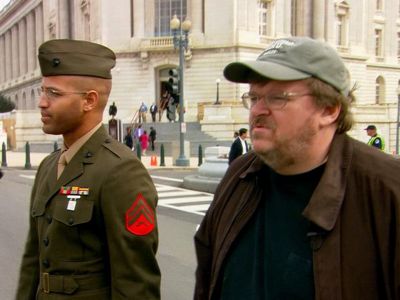 EDITOR’S NOTE: Every day for the next month, indieWIRE will be republishing profiles and interviews from the past ten years (in their original, retro format) with some of the people that have defined independent cinema in the first decade of this century. Today, we’ll step back to 2004 with an interview indieWIRE’s Eugene Hernandez had with Michael Moore upon the release of “Fahrenheit 9/11,” which would go on to become the highest grossing documentary of all time.

When it opened in nearly 900 theaters this summer — art-house screens, and shopping mall megaplexes — Michael Moore‘s “Fahrenheit 9/11” marked the widest opening ever for a documentary film. (Of course, that’s not counting the more than 2,000 screens that brought us MTV Films‘ non-fiction, reality fare “Jackass: The Movie” and “The Real Cancun”). The only other doc to open as widely also came from MTV: “Tupac: Resurrection” debuted on 801 screens last November. Mentioning such titles in the same paragraph as “Fahrenheit” seems fair, since Michael Moore’s new film is a hybrid, mixing documentary techniques with the entertainment value of a reality TV show, or more precisely a satirical comedy cable news broadcast. Were it a straight doc about the war in Iraq and the Bush administration, “Fahrenheit 9/11” wouldn’t be debuting in more than 800 theaters. [The film was released on DVD last month and will be available tonight, for one night only, via pay-per-view on Dish Network satellite and Cinema Now online.]

“I make movies,” Moore told me plainly, when I asked him how he answers the critics who say his films are not documentaries. “I don’t write non-fiction books,” he continued, referring to his successful career as an author. “I don’t call it non-fiction, I call it a book.”

The Rise of Non-Fiction Film

Moore spoke with indieWIRE during a lunchtime interview at the Majestic Hotel in Cannes back in May, just a few days after showing his film for the first time and days before winning the coveted Palme d’Or, the top award at the prestigious Festival de Cannes. The director, who drew large crowds of well-wishers and paparazzi everywhere he went along the Croisette, sat down with a small group of journalists to talk about his new film.

“If I had a dream years ago it was that I wouldn’t be alone and that other people would start doing this — it is really our moment,” Moore explained, referring to the spate of politically minded and anti-corporate documentaries coming to theaters this year. His influence can be seen in Morgan Spurlock‘s “Super Size Me,” a stunt doc that has already made about $9 million since opening in U.S. theaters, and Moore himself can be found on screen in Jennifer Abbott & Mark Achbar‘s “The Corporation” and Dan Ollman, Sarah Price and Chris Smith‘s upcoming look at a group of WTO impersonating pranksters, “The Yes Men.”

Moore emphasized that he feels a responsibility to the field of doc filmmakers and added that he has specifically given grants to support non-fiction work. TV viewers will recall that before making his bold acceptance speech for “Bowling for Columbine,” Moore invited his fellow doc Oscar nominees on stage when he won the Academy Award.

From Eagle Scout to Journalist to Muckraker

With a line of best-selling books and successful films (his last, “Bowling for Columbine” made more than $20 million in theaters and more than five times that on DVD), Moore has emerged as an unlikely media force. Born in 1954 outside of Flint, Mich., Moore was an Eagle Scout who became a journalist after dropping out of college. He edited Mother Jones magazine before making “Roger & Me,” his doc about Flint, in the wake of General Motors closing its local plant. Moore directed a short-film follow-up, titled “Pets or Meat: The Return to Flint,” and made a fiction feature film with John Candy, “Canadian Bacon.” Moore’s “TV Nation” series (on NBC and then FOX) ushered in his latest wave of work as an agitator, leading to his books, “Downsize This!,” “Stupid White Men” and “Dude, Where’s My Country,” another TV series (“The Awful Truth”) and more films, including “The Big One,” and the Oscar-winning “Bowling for Columbine.”

“I didn’t set out to be a celebrity,” explained Moore during the recent interview. “I have never really been comfortable with being well-known,” he continued, “I’ve felt that a little bit of me goes a long way — I don’t want to dominate the subject matter.”

In the case of his new film, Moore has almost removed his image entirely from the picture. While his narration certainly drives the film, he is hardly seen on screen. “I think that subject matter and the individuals in the film didn’t need help from me,” he added. “On a personal level, I just don’t like looking at myself,” Moore laughed, adding that in the editing room a posted sign read, “When in doubt, cut me out.”

Continuing, Moore said, “I don’t want this character of Michael Moore to be the focus, I want Lila Lipscomb to be the focus,” he added, referring to the emotional interview with the mother of a killed soldier that he presents in the film’s climax. He added, “And I have no problem with letting Bush drive the humor.”

“Fahrenheit 9/11”, a powerful piece of filmmaking from a passionate filmmaker, has stirred considerable controversy and partisan sentiments since May 5, when Moore boldly proclaimed on his own website, “Disney Has Blocked the Distribution of My New Film.” As Moore and his distributors have embraced the controversy that has come along with the film’s impending release, some have questioned the accuracy of information and details provided in “Fahrenheit 9/11” and Moore has set up a team of people to rapidly respond to any media criticisms. Detailed notes and reactions are being posted to Moore’s active website, MichaelMoore.com. Since securing distribution via Lions Gate Films, IFC Films, and Bob and Harvey Weinstein‘s Fellowship Adventure Group, the filmmaker began selling tickets via the Internet and mobilizing audiences via MoveOn.org.

The film begins with a look back at the 2000 presidential election followed by protests on Inauguration Day. It explores links between the Bush administration and the Bin Laden family as well as the Bush family’s longtime association with top Saudi Arabian royals. After exploring failures in Afghanistan and Iraq, Moore takes viewers back to Flint to witness a shocking attempt by U.S. military recruiters to lure African-Americans to become soldiers. The aforementioned interview with Lipscomb, including her reading a final letter from her son that damns the Bush administration, is shattering.

“This is a movie about the four years of Bush,” explained Moore, “It begins with the first act of immorality; the reason it begins there is that it all rots from there.” He added, “If you allow someone to steal your White House, to steal an election, what else will these people do? Thus begins the decline from that moment in Florida to the lie after lie after lie to manipulate the people, all for their own gain and their own friends’ gain.”

The director showed “Fahrenheit 9/11” to public audiences in Michigan in March and April at early test screenings that may have actually sparked Disney’s concerns about the film. Moore said he drew audiences to showings of his movie without telling them in advance that they would be seeing the new film. He said that the reactions from those screening were overwhelmingly positive and reported news of the ovations to the studio and then Disney had an exec take a look at the movie. Disney then decided that it was too hot to handle, concluding that it might affect the outcome of the election and telling Miramax that it could not release the picture. “I had an early sense that this would resonate with an audience,” Moore explained.

Decade: Darren Aronofsky on “Requiem For a Dream”

Decade: Kenneth Lonergan on “You Can Count On Me”

Decade: Agnes Varda on “The Gleaners and I”

Decade: Wong Kar-wai on “In The Mood For Love”

Decade: John Cameron Mitchell on “Hedwig and the Angry Inch”