Diane Bell, after immersing herself in the Hollywood scriptwriting business, has had little luck with the scripts she’s written under contract getting produced. Her first feature script to be produced has her at the reins of a low-budget feature with a fantastic premise: “Believing he’s the last door-to-door encyclopedia salesman in the world, George decides to write The Obselidia, a compendium of obsolete things. George believes that love, among other things, is obsolete. In his quest to document nearly extinct occupations, he befriends Sophie, a beautiful cinema projectionist who works at a silent movie theatre. Sophie believes that nothing is obsolete as long as someone loves it. When they interview a reclusive scientist who predicts that 80 percent of the world’s population will be obliterated by irreversible climate change by the year 2100, the two must face the question, if the world is going to disappear tomorrow, how are we going to live today?

Diane Bell’s soft-spoken, profound, and disarmingly charming debut feature engages these fateful issues of our time with a warm, sparkling sense of beauty, sincerity, and compassion. Obselidia offers a rare and humane lens through which we can view a world increasingly preoccupied with and inhabited by extinction.” [Synopsis courtesy of Sundance Film Festival]

I’ve loved movies for as long as I can remember and prior to “Obselidia,” I wrote a number of optioned and commissioned scripts – all as yet unproduced. This is my first film as a writer/director (I hadn’t even directed a short before and I’ve never had any formal training), but when I wrote this, I knew I wanted to direct it. I honestly believed no one could do it as well as I could, it was so close to my heart. I also just wanted to get it made, rather than watch it languish forever in development.

I was thinking a lot about obsolescence, and about how the rate of change has got so much faster. Used to be you bought a TV for twenty years – now you buy a computer knowing it will be a dinosaur in two. Combined with the increasing threat of global warming, which I see as intrinsically connected with our consumerist insatiability, I knew this was something I wanted to explore. I wrote it the way I love to write, with a premise, a couple of characters and a vague idea of the destination – then I went on the journey. I followed my instincts every step of the way. I advertised on Craigslist for a line producer to do a budget to raise funds, and this being LA, I got a bunch of responses. Through that I met two great guys, Matt Medlin and Ken Morris, and I told them from the start: we don’t control the result of our actions, we just control our intentions, and at the very least, we’ll all make a bunch of new friends and get better at what we do. That was the approach – open heart, clarity of intention, pure dedication. We didn’t care about the idea of profit or glory, we just wanted to make the best damn thing we could and have a great time doing it. 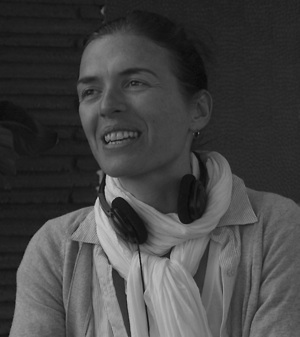 There are so many challenges every day (and on a microbudget movie much of these have to do with money, or lack thereof), but the biggest one definitely was about faith – having faith in myself and in my instincts, despite not having experience as a film-maker, and keeping faith when the going got tough, as of course it does. I had an old Japanese haiku pinned above my desk: “O Snail, climb Mount Fuji, but slowly, slowly.” And that kept me going: so many times, that’s exactly how I felt, like a tiny snail climbing a giant mountain. Some days are hard, some days are easier, but you just have to keep going up.

Bell on her influences and future projects…

This movie is born from a deep love of movies (one of the main characters is a cinema projectionist), so there are literally thousands of inspirations. A few of the key touchstones: for the look of the film, Wim Wenders’ “Paris Texas” and Francois Truffaut’s “The Man Who Loved Women”; for driving scenes on a low budget, the great B-movie, “Gun Crazy”; for cycling, “Jules et Jim”; for romance, Woody Allen’s “Annie Hall” and Richard Linklater’s “Before Sunrise.” For a go and do it attitude, John Carney’s “Once” and Luc Moullet’s “Brigitte et Brigitte.” That’s just a start… I’m writing a new script right now about a woman who dies and discovers that even angels make mistakes, and I want to direct that next. I’m also hoping to ignite Heroes and Zeros, a script I wrote previously about a Mexican voice-over actor and a bad-boy movie star. I’ve also just been working with the director John McTiernan (“Die Hard”) on a script about the Nez Perce Indians, “Bitteroot.”

[indieWIRE invited directors with films in the Sundance U.S. Dramatic & Documentary Competitions as well as the NEXT section to submit responses in their own words about their films. These profiles are being published through the beginning of the 2010 Sundance Film Festival. To prompt the discussion, iW asked the filmmakers about what inspired their films, the challenges they faced and other general questions. They were also free to add additional comments related to their projects.]

This Article is related to: Festivals and tagged Features, Interviews, Obselidia