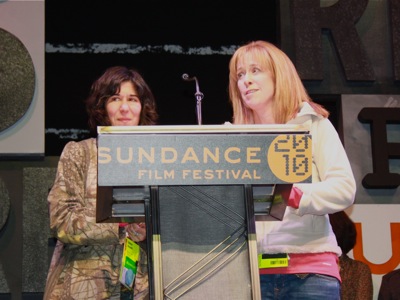 “We really do believe in this thing called Sundance,” said new festival director John Cooper, standing alongside managing director Jill Miller today, kicking off the ceremony and introducing host David Hyde Pierce, leading into a rap duet between the two men to kick-off the night.

Debra Granik’s “Winter’s Bone” led the U.S. Dramatic Competition, taking both the grand jury prize and a special jury prize for screenwriting, while suspected player “Blue Valentine” was entirely shut out of the winners. “Bone” follows an Ozark Mountain girl who hacks through dangerous social terrain as she hunts down her missing father while trying to keep her family intact.

“I’m so excited and moved that this film is even out there,” jury member Parker Posey said upon announcing the award. “If it doesn’t get the attention and respect it deserves, I’m going to stab myself.”

“Bone” was joined in the winners by actor-turned-director Mark Ruffalo’s “Sympathy For Delicious,” which won a special jury prize.

“We’ve gotten our ass handed to us by the reviewers and still we’re here,” said Ruffalo, thanking audiences and the festival for their support of his movie.

In the U.S. Documentary Competition, Sebastian Junger and Tim Hetherington’s “Restrepo” led the winners, taking the grand jury prize. “Restrepo” dug in with the Second Platoon in one of Afghanistan’s most strategically crucial valleys reveals extraordinary insight into the surreal combination of back breaking labor, deadly firefights, and camaraderie as the soldiers painfully push back the Taliban.

“If this movie can help this country understand how to go forward we would be honored by that,” Junger said upon accepting the prize.

Filmmaker Laura Poitras – accepting the cinematography award on behalf of her film “The Oath,” took a moment to honor the memory of Karen Schmeer, who died tragically last night in New York City. Moments later, “Sergio” director Greg Barker took the stage to also honor Schmeer, who won the editing award at Sundance last year for the film. “We all had a great loss yesterday,” Barker began, continuing, “We look for meaning in tragedy and experienging it, I just don’t know what the meaning is. We have lost a great talent and a very dear friend.” 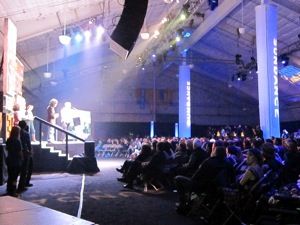 Inside the awards ceremony for the 2010 Sundance Film Festival. Photo by Eugene Hernandez

.
David Michôd’s “Animal Kingdom” led the World Cinema Dramatic categories, winning the grand jury prize. The Australian film follows a seventeen year-old boy who is thrust precariously between an explosive criminal family and a detective who thinks he can save him.

The World Cinema Documentary categories were led by Mads Brügger’s “The Red Chapel,” which took the grand jury prize. The Danish film follows a journalist with no scruples, a self-proclaimed spastic, and a comedian travel to North Korea under the guise of a cultural exchange visit to challenge one of the world’s most notorious regimes.

“This is mind-blowing,” said Brügger upon accepting the award. “Every time the sun sets, 33 million spend another day in North Korea, which is a nightmare on Earth.”

Other major winners in the program included Christian Frei’s “Space Tourists,” which won the directing prize.

“Wow, I am overwhelmed, I wasn’t expecting any award,” Frei said, accepting his prize. “I saw so many strong, well-crafted documentaries.” 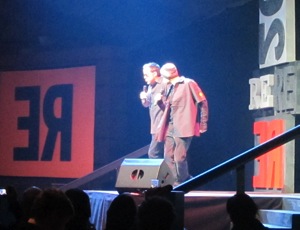 The festival’s announced audience awards – given out in all four of their major categories – were given to Josh Radnor’s “happythankyoumoreplease” (U.S. Dramatic), Davis Guggenheim’s “WAITING FOR SUPERMAN” (U.S. Doc), Javier Fuentes-Leon’s “Contracorriente” (World Dramatic) and Lucy Walker’s “Wasteland” (World Doc) in the world cinema dramatic and documentary categories, respectively.

“This film almost killed us,” Guggenheim said upon accepting his audience award. He related a story about seeing a woman from South Africa at one of the Sundance screenings of his doc about U.S. education. She told him, “You should be ashamed the way you treat your children in America.” While Guggenheim said he was proud of the movie, he added, “I realized there is so much more to do.”

In the brand new NEXT category, a jury selected “Homewrecker,” directed by Todd Barnes and Brad Barnes and written by Todd Barnes, Brad Barnes, and Sophie Goodhart won the “best of NEXT” award. The American film follows “the last romantic in New York City, an ex-con locksmith on work release.”

“If there’s anyone out there who hasn’t made a film yet,” Todd Barnes said upon accepting the award alongside his brother Brad. He relayed the short time frame in which the two made their film, starting with funding from a good friend in Singapore on June 25th of last year. “We started July 27th, we shot for 13 days,” he said, relating a series of key dates that included sending their movie to the festival on October 5th and receiving their acceptance on November 27th. “We finished our movie about three days before the festival,” he concluded, “If you want to make a movie, set a start data and call your best friend!”

Ahead of tonight’s ceremony, awards were presented to the Sundance NHK winners as well as winners in the shorts category earlier this week.

— a full list of winners is on the next page —

Backstage video from the Sundance awards ceremony with Debra Granik and Sebastian Junger. 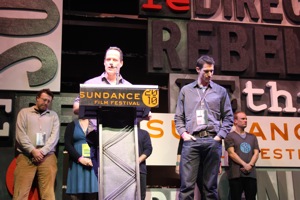 The Best of NEXT:
Homewrecker, directed by Todd Barnes and Brad Barnes (film page).

World Cinema Special Jury Prize: Dramatic for Breakout Performance:
Tatiana Maslany, for her role as a starry-eyed teenager in “Grown Up Movie Star.”

This Article is related to: News and tagged Winter's Bone